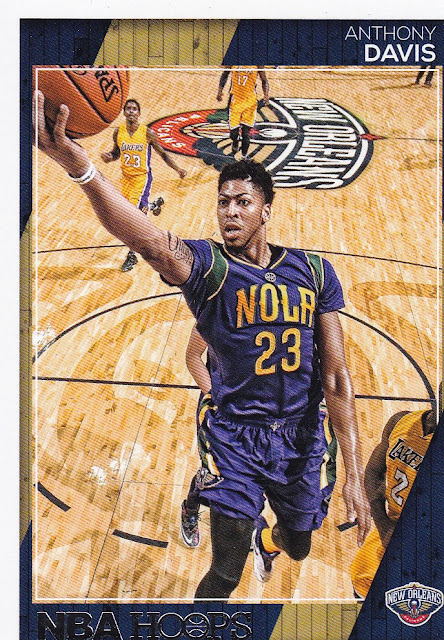 2016-2017 Hoops:   I'm a sucker for older basketball packs so this was an easy pickup some time back.  This pack starts out with a great photo of Anthony Davis laying it up against his future team, the Lakers.  I really like that NOLA jersey as well.

Bradley Beal is having a great year though he's going solo in John Wall's absence.  Chris Paul is on his second team since leaving the Clippers via trade.  The thirty-four year-old is having a good year but not a great one for the Oklahoma City Thunder who who are surprising me with their 26-19 record.

Nikola Jokic is a stud for the Denver Broncos so this Faces of the Future insert was pretty prophetic.  Malcom Brogdon was traded to the Pacers last offseason and is helping the surprising Pacers who have done very well even without Victor Oladipo who is still out due to injury.

Zach Lavine is having another outstanding year for the Chicago Bulls whom he was traded to in the Jimmy Butler deal.  Fun pack.  I enjoy looking back and of course finding stars but also seeing how things have changed and how players have progressed.