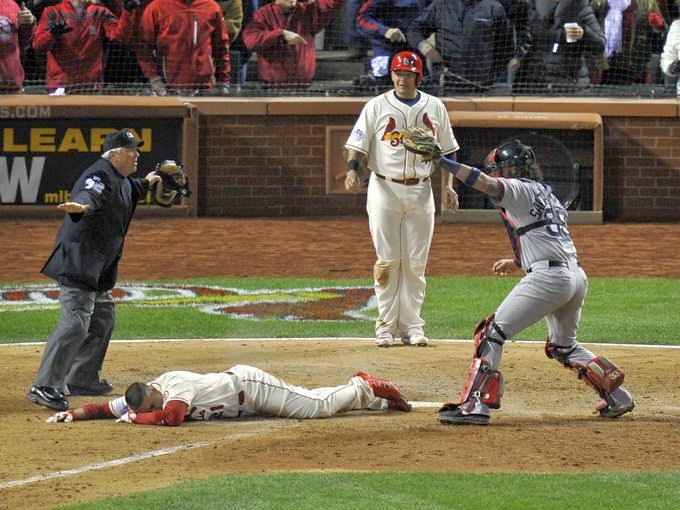 Jayson Stark posted a great article on ESPN.com going through the details with all the key players of the game three obstruction call that gave the St. Louis Cardinals a 2-1 series lead in the 2013 World Series.  The play, so unique, took on a life of it's own due to the grand stage, the fact that it ended the game and the fact that the umpires handed it so well.

I watched it live in my buddies man cave.  He a Cardinals fan and me a Red Sox fan.  It was a great game that came down to the 9th inning.  What more could you ask for?  I was the guy who jumped up and yelled "what" at the screen after the play unfolded.  Not understanding what had happened in the immediate aftermath.  My friend understood quicker than me but I'm not sure I wanted to understand.  As he and the announcers explained it the reality set in.  Ugh.  After watching Yadier Molina thrown out at home on the play, the throw from home to third go awry and what seemed like a sure double play ending to a whacky play I had been so excited...and then it went downhill from there.  The ruling, the confusion, the ongoing explanations, the interviews...  As I drove the 60 miles back to my home I listened to the local sports radio station again going over and over that last play.  It didn't help my mood.  Losing is tough enough, much less when it seemed like the baseball gods had suddenly decided your team was destined to lose the Series.

It was the right call but it didn't make it easy to stomach.  It just seemed so random.  Something out of the player's control.  The fact the Sox won the Series in six games took most of the sting out of that play.  Still, it is one I'll never forget.  It was already a great night sharing good natured ribbing with my buddy all night but to be able to see that game, that play, that ending, in that setting was something I'll never forget.  The fact that he had a 1,000 inch TV was also a big plus.  He is also a smart fan and didn't rub it in (I only did that a little bit after the Red Sox won it all).  Take a look at the article Jayson Stark wrote.  It is a great recounting of all the action with tons of details added.    Even non-Red Sox and Cardinals fans should enjoy.
Posted by Bulldog at 3:49 PM