This is the third of four boxes of cards I picked up earlier this month at a local card show.  I'm a big fan of the early Upper Deck offerings so I was definitely looking forward to this box.  To the left were three of my favorites.  Bob Golic just screams football player in this photo, Cortez Kennedy introduces himself to a Patriots running back, and Jim Harbaugh is on the business end of a Leon Seals hit.  Great photos which is something I saw throughout this break.

To the box itself.  The box only cost me five dollars so this was definitely a win!  There were 36 packs in the box with 12 cards per pack for a total of 432 cards.  I received two of the Joe Namath Football Heroes set.  Nice cards and at that time retired players were not common in sets so this was a big deal.  The other insert I received was a Marion Butts hologram game breaker card.  The cards were both low and high series cards though the box was labeled "High Numbers".  With both high and low series cards you'd see things such as me pulling the Alvin Harper Star Rookie card (#24) and the Alvin Harper Rookie Force (#634) cards.  The first had Harper in his Tennessee Volunteers uniform and the second had him in his Cowboys uniform.  I liked getting the different cards of the same player in that manner.  My favorite pull of high-low series instances was getting Roger Craig in his 49ers (low) and then his Raiders (high) uniform.  Nice job by Upper Deck.  Team checklists have art of one of the team's players on the front.  I really liked this about Upper Deck who did this throughout their cards in the various sports.  I also mentioned the different rookie cards.  There was also Team MVP cards of the team's "MVP".  As with the rookie cards the logo (MVP, Rookie Force, etc) takes the place of the "football" in the lower right corner which keeps it from interfering with the photo.

The cards themselves come in both portrait and landscape views.  The Upper Deck logo with the year of the set are in the upper left hand corner.  A secondary team colored border runs down the left of and bottom of the card with a second team color also running below that at the bottom.  The two lines at the bottom end up curving into a football shape at the bottom right of the card with the team logo in the middle.  I like this.  It is a subtle thing but looks great on the card.  The player's name is in the bottom left in the second border color and the player's position is just to the left of the "football" again in the second colored border on the bottom.  Overall a good looking card with lots of room for the photo which is the main focus of the fronts of these cards.


The back of the cards are done in landscape though the card number, Upper Deck logo, Team NFL logo, NFLPA logo, and player's position and number are positioned in portrait. 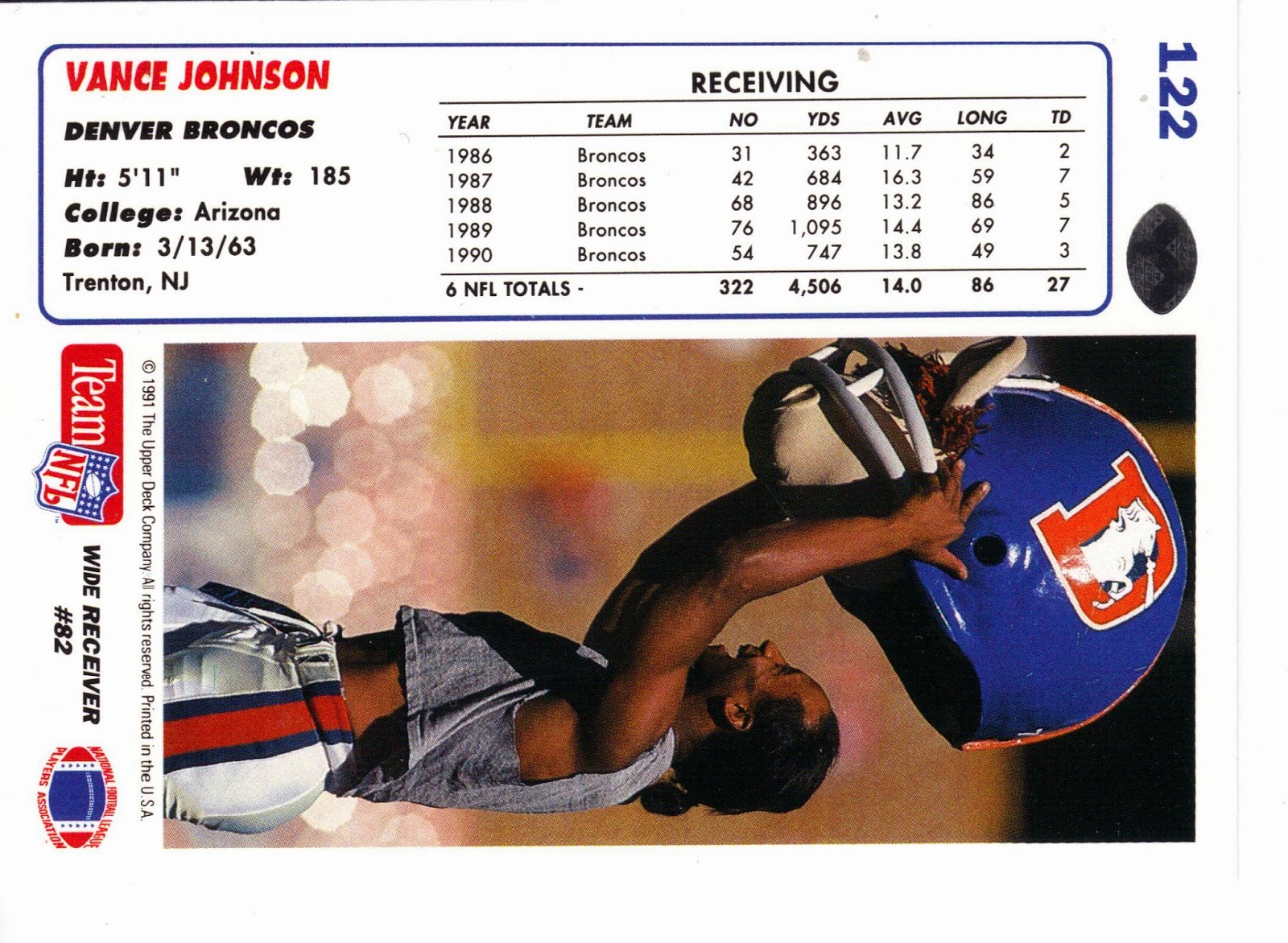 At the top is a blue bordered area with the player's name in red, team, Ht., Wt. College, birthdate and where born.  To the right of that information is the player's stats for the last five seasons.  Standard stats which are fine but you don't get the games played for each season.  Important when putting stat totals in perspective.  That is my only complaint there.  At the bottom is a color photo different from the one on the front of the card.  They range from action shots, to standing, sitting or even the random photos as depicted above on the Vance Johnson card.  The photos are the same quality as the front which makes the back really pop.

I was definitely that guy who loved Upper Deck when it came out in the 90's.  The better card stock, great photos, white backgrounds and really different card designs made them a hit with me and of course many others.  They were definitely the golden boys for a time.  So picking this box up at such a great price was a no brainer.  The cards themselves definitely have a fond place in my collecting memory. The fun of opening all those packs and reliving those memories from 20 plus years ago was great.