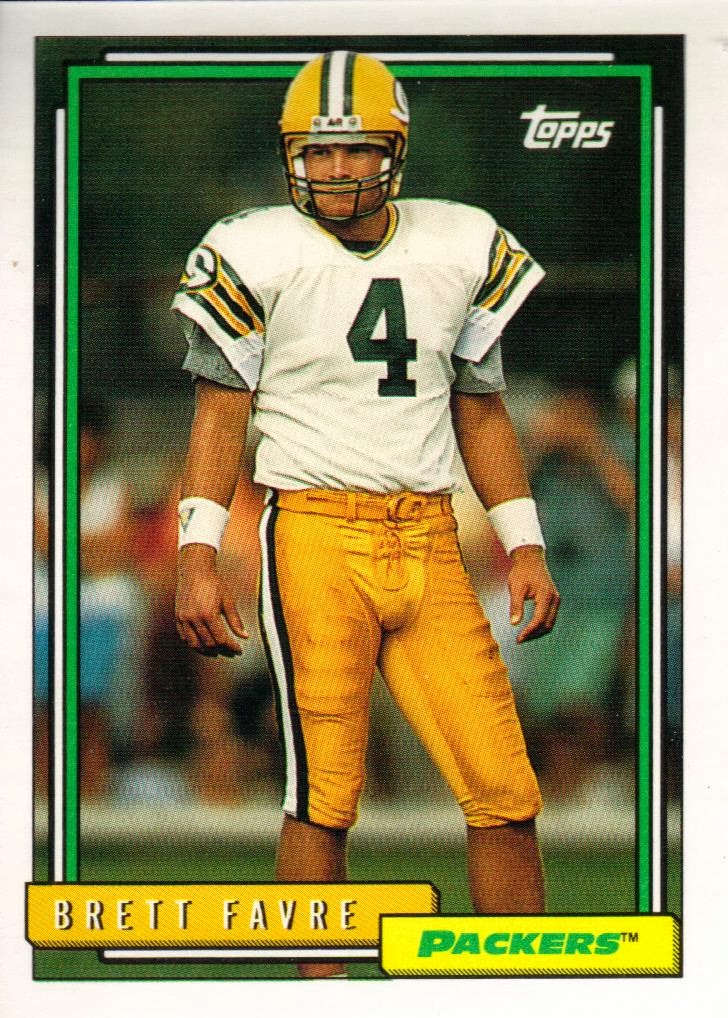 So at the card show this weekend I picked up some cheap early 90's card boxes.  One of which was the 1992 Topps football high series box.  Only I didn't pay close attention and didn't realize it was a high numbers box.  So I was stoked.  I had also picked up other boxes to include a box of Wild Card football high numbers.  Opening the box of Wild Card high numbers I was lucky the packs contained half high numbered cards and half the base set.  With the Topps set?  Not so lucky.  The box had 36 packs each containing 15 for a total of ﻿540 cards.  Sweet.  Oh wait the high number series only contains 99 cards.  Bummer...  Can you say lots of doubles?  Triples?  Quadruples?  All is not lost.  I did grab 5 of the Brett Favre cards which is the prize of the set.  Yeah!  In fact it seems I got about that many of most of the cards.  Really the duplicates weren't much of a negative and I enjoyed opening the box.  Heck opening any box of cards is fun.  Next time I'm buying a cheap boxes I'll pay a little more attention though.  Still it won't dampen my enthusiasm.  To get a box of cards for $5 box is always a win. Each pack came with a gold card meaning the player's name and team name had gold over them.  Bump's the value some but otherwise the look is not appealing to me.

The front of the cards have a white border.  The main photos are a good size and are framed by a white line and a team appropriate colored line.  The Topps logo is in white or black near the top of the photo.  It is on the right or left depending on which works best with the photo.  The player's name and team name are at the bottom of the card, again, in team appropriate colors.  Would have liked to have seen the player's position but this design works so I won't complain.  I like these cards.  The cards I pulled for the most part were action shots and the colors really jumped out at me.  Deion Sanders' black Falcons uniform really worked and the greens for Randall Cunningham and Ken O'Brian made for really sharp cards.  The Dale Carter in the red was another vibrant looking card with all the red.  It isn't all about color for me but these photos just looked really nice and the colors popped. 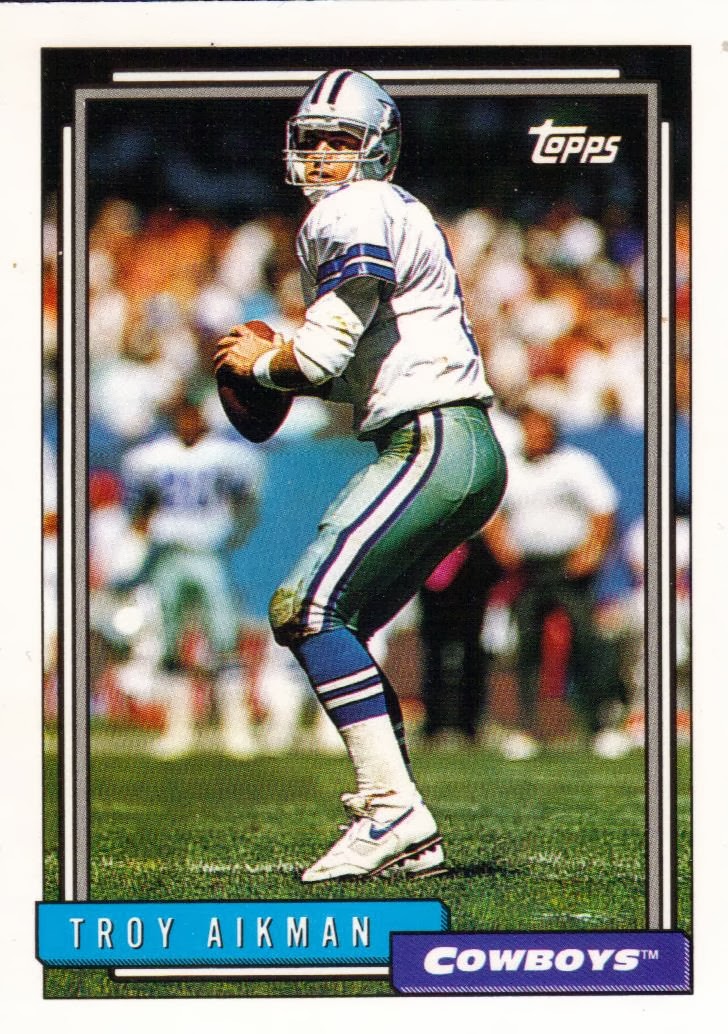 The backs have white backgrounds.  I don't know when Topps went away from the old orange background but I think this may have been one of their first years with a white background.  Definitely better than the older more drab look.  The card number is in the upper left with the player's name, position, and team to the right of that framed in a team colored box.  Below that is a large box encompassing most of the back of the card in a team colored border.  At the top of that box is the player's personal information - HT, WT, ACQ, DRFT, COLLEGE, BORN, HOME.  No issues here.  The stats for each year of the player's career are next.  One of my favorite things about Topps' cards is just that - getting to see all the stats.  I won't list out all the categories they have for each position but I had few issues with them.  After the stats there is a quick write-up on the player.  After that is a photo of the team's home field that goes from side to side with the name of the stadium just below it in black.  To finish it off the Topps logo is at the bottom left and the players logo is at the bottom right.  Last but not least the Topps logo is also featured in the center of the back of the card in a muted blue outline in the background.  Overall a nice looking back that hits some highs while having few detractors. 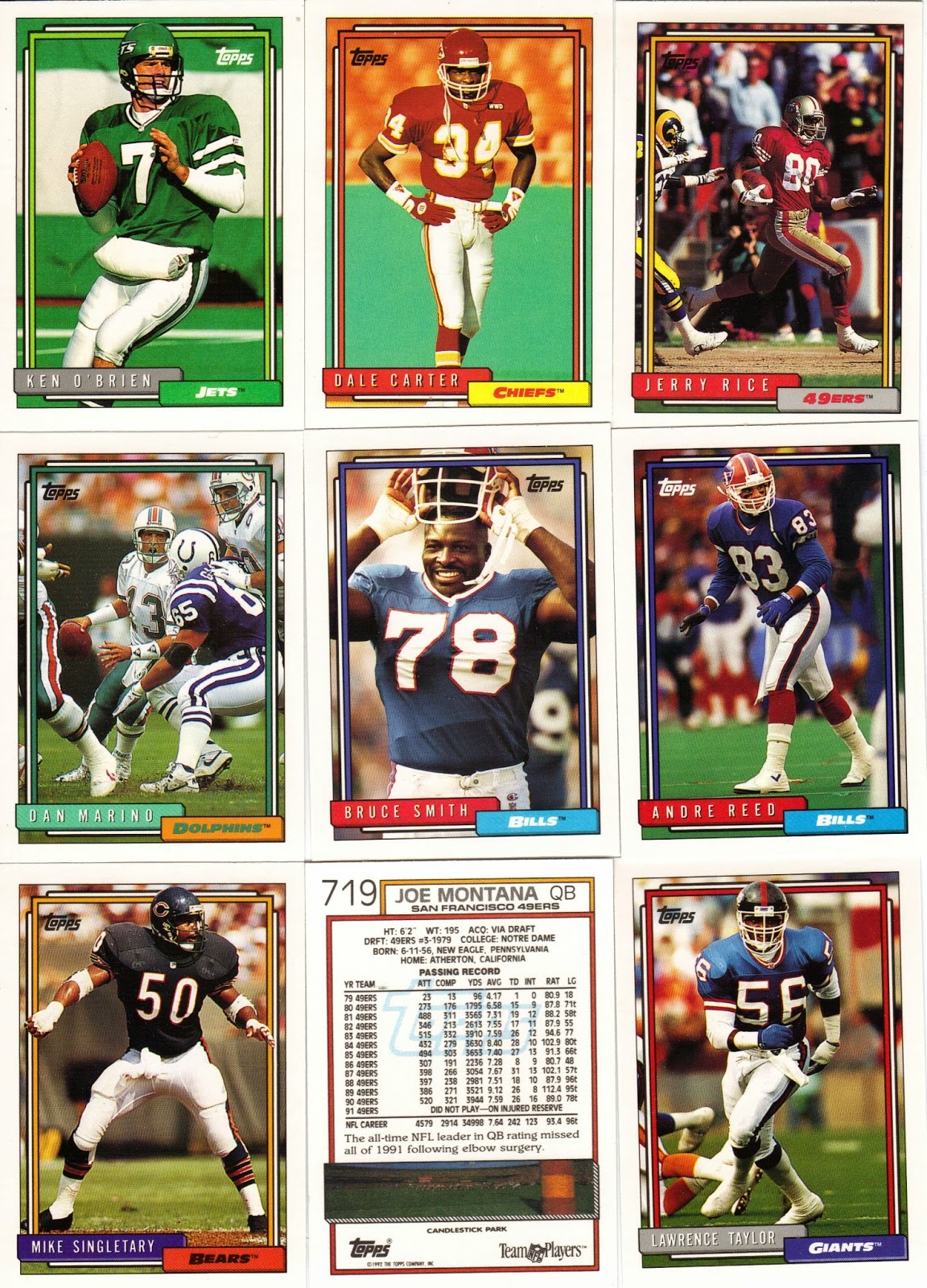 Maybe it is the buzz from just getting to open boxes of cards for the first time in years but I really enjoyed opening this box even if it was only high numbers.  It was packed with stars and the photos are very good.  The design is simple but still appealed to me.  The price of $5 was well worth it for the enjoyment I got out of this box.