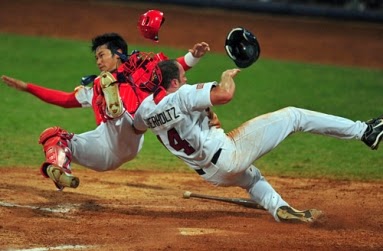 MLB has enacted expanded instant replay reviews, the no collisions at home-plate rule, and tried to make things safer for pitchers.  All for getting it right so I love the use of extended replay...and hate it.  This is tough.  Baseball games already last around three hours.  Having to sit through replay reviews seems like a tough pill to swallow.  Where as most folks watch one to two NFL games a week, MLB teams play 5-6 times a week.  While the game itself is fine the speed is something that can be a pain.  I like many can get distracted very easily.  I know this isn't everyone but it something all sports have been fighting for years now.  If viewers aren't engaged they can just as easily flip the channel, pick up their laptop, play on their phone or go to whatever other device that can catch their attention.  I'm not saying I won't like this.  If done right and these calls dwon't drag on too long and this will be a great thing for the sport.  I honestly think umpires will appreciate it as well.  This will reduce the amount of bad calls left out on the field.  Again I'll have a wait and see attitude for now while hoping they can work out any kinks quickly and instant replay will settle into the background as just another part of the game.

The home-plate collision rule is a tough one.  We all love the play.  There is little more exciting.  That said it has always confused me.  Catchers can't block the plate without the ball, but do, and players just can't steam roll defenders, but do.  Always was something that had me scratching my head.  I think they've done about as good a job as possible of putting something in place to help minimize the injuries in plays at home-plate.  But though I never want anyone to get hurt I will miss those massive collisions at home.

There were also some restrictions lifted on the protective headgear that pitchers can wear.  Some have already been in place but not surprisingly pitchers prefer comfort over safety.  I get it.  I've never had balls whizzing around my head at 100 miles per hour but playing sports in general I've always chosen comfort over anything else.  I think this will boil down to someone coming up with something that will not only be comfortable but safe.  Doesn't look like it is out there yet but someday a company will figure it out.
Posted by Bulldog at 1:28 PM