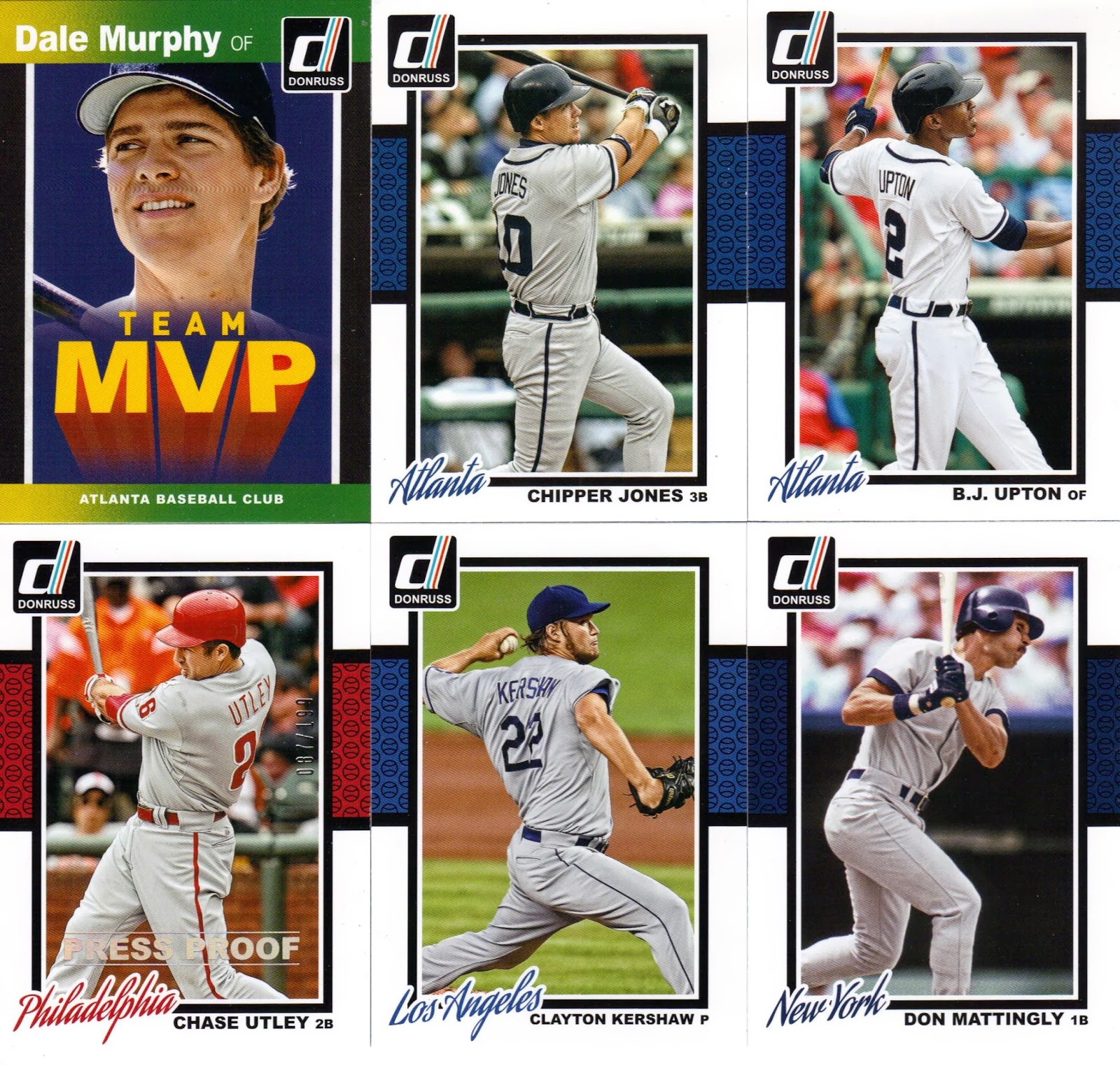 I was curious to see the return of Donruss to baseball cards so I picked up a pack of their 2014 offering.  You can find Cardboard Connections breakdown of the set contents here.  I paid $7 at a local sports collectors show.  The pack came with eight cards and one insert.  Donruss doesn't have the MLB license so you won't find team logos or mascot names here.  Six of the cards were of current players and three were of retired players.

The front of the card is bordered in white with two short thick colored lines on the left and right of the card about halfway up the card.  They are colored in the appropriate team colors.  A prominent Donruss logo is in the upper left of the card.  The actual picture has a white and black border.  The team's city is in script and the bottom left with the player name and position to the right of that.  This is a simple front that I like.  Borders could have been a big smaller but the framing of the picture works for me.

The back of the card has a blue background except where the stats are located and that background is white.  The card number is at the upper left inside a baseball.  At the center top is the player's name with the following below that:  birthdate, birthplace, ht, wgt, bats, throws.  Then comes some legal stuff and then the stats.  The stats are the 2013 stats (for active players) and career totals for both active and retired players.   You'll find the YR, TEAM, W, L, ERA, G, GS, SV, IP, H, BB, K, and WHIP for pitchers and YR, TEAM, GA, AB, R, H, 2B, 3B, HR, RBI, SB, OBP, SLG, and AVG for batters. A small Panini logo is after that with a write-up after that.  The write-ups are somewhat generic but good.  The Chipper offering was a little more personal with a story of how far some diehard fans went (converted seven acres of their farm into a maze with Jones' likeness).  Then comes the copyright and licensing stuff at the very bottom.   No complaints with the stats or the card back.  It harkens back to an older design and I'm all about that if done right.  I prefer more stats if not all the stats from each year the player played.  In fact that will be my one complaint about the back of these cards.

This is a nice looking set.  I would get it if someone said they were a bit plain but it works for me.  Would like to see some more of the inserts but they've already shown they like putting past players in their packs so that is a big plus for me.  Solid effort from Donruss.  And bonus for three of the eight cards being Braves' players.  I'd like to see baseball get away from exclusive contracts.  I just don't see how they are good for the hobby.  Would love to see more products like this, just with the team logos.  Good job Donruss.
Posted by Bulldog at 3:00 AM