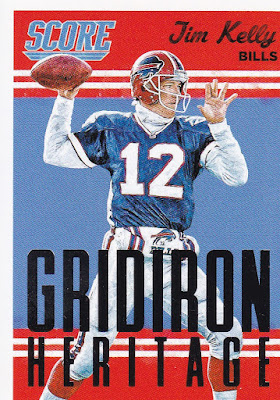 This box of 2015 Score football was a Christmas gift last month.  This set, like most Score football, has a huge lineup totaling 440 base cards as well as plenty of inserts and parallels.  The highlights for me were the Gridiron Heritage and All-Time Franchise subsets.  The Jim Kelly really stood out to me.  He is an all-time great Buffalo Bill and one of my favorite players.  The card is really cool.  I had fun with this box.  The price ($29.99 on Amazon) on these boxes is definitely palatable and on average you'll get one auto or relic.  I pulled a dual jersey relic of some pretty good defensive players which can be seen at the end of this post.  There is some decent ink to pull as well but the notable names are a hard chase through wax.  Plenty of parallels for those of you who like those as well.  Basically just a good variety of cards with a large base set and overall good design.  I was very happy with Santa Claus and my box.

This Malcom Butler card is awesome.  The photo is from the Super Bowl winning interception of Russell Wilson.  That's such a great sports moment and for it to be captured on Butler's base card is pretty cool.

A few different photos:  DeMarcus Ware running with the ball, Clay Matthews doing a ballet move and Tom Brady doing jazz hands...ok he isn't but that was my first thought seeing this photo.

There are 110 rookies in this set and I pulled some great ones highlighted by Todd Gurley and Vic Beasley.  College unis look good here and thank goodness the NFL team is listed on the card.  There are some Score sets that don't list teams and that can drive me crazy.

Different die cut inserts including one of all-time great John Stallworth on a camo parallel.  I don't see that many of Stallworth's cards which is shame.

I love both of these insert sets and I plan on grabbing these on eBay.  The Steve Largent is a gold parallel.

Some cool photos of the Legion of Doom.  The intensity on Richard Sherman's face says it all.  The backs have enough color and different things going on that I like them.  It shows you don't have to go crazy to present a non-boring card back.

The Lawrence Timmons card is a Showcase parallel and the Jeremy Maclin is a Scorecard parallel.

I found it interesting that Peyton Manning is featured in two different unis on these two different inserts.  I do like it though. 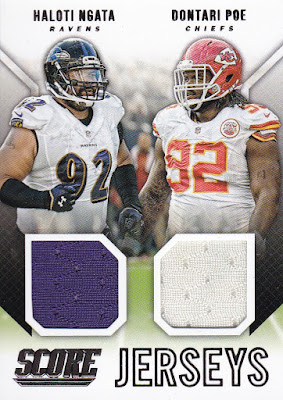