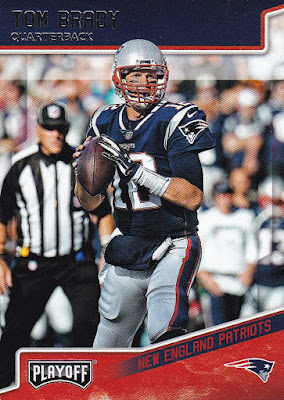 Released just a few weeks ago this is my first look at the 2018 Playoff football and I really like the look of these cards.  There is plenty of color and nice photos here.  These packs contain 40 cards which is a big plus for me and I definitely liked my pull.  Those looking for a large amount of inserts won't find them here as it seems those will fall two to three per pack not including the parallels you'll find.  The big thing missing for me was that was the 2017 Playoff offering had 100 retired greats. That was a big reason for me liking that set so I'm disappointed Panini chose not to  include them in this year's set.  Aesthetically it seems as though they wasted a bit of space at the top and bottom.  Still I really like the cards on first look and I'm sure you'll see more of them in the future.

While the photos on these defensive stars of the league all seem similar I still like the photos.

That Fitz card is a Goal Line parallel which means you'll see Goal Line printed on it and the player's name and position will be in blue foil instead of the standard silver foil.  The backs have a cropped color version of the front photo and nice team logo.  These work for me.

A look at the inserts I pulled and the Baker Mayfield RC.