Secret Santa Was Good to Me 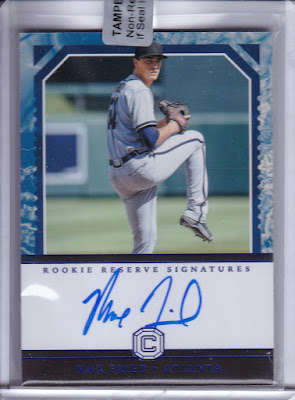 My Secret Santa cards came in on Friday and I wanted to share.  I received not one, but two autos which was a great surprise. They are both Max Fried who is a young left who has done well in limited time for the Braves.  He is a former 1st round pick from 2012.  The first auto is a 2018 Chronicles Cornerstones Rookie Reserve Signatures Quartz parallel #/49.  This is a sweet looking card. 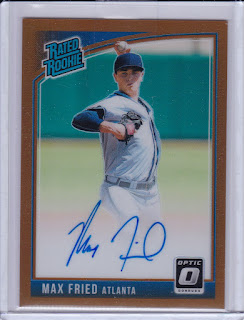 The next auto is from the 2018 Donruss Optic set - Rated Rookie Signature.  Another nice card which I think is a bronze parallel.  Two autos was more than I could ever expect from my Secret Santa...and there is more... 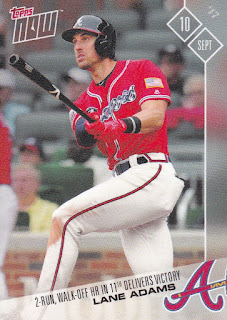 My first ever Topps Now card.  This is of Lane Adams and one of the three walk off wins by the Braves in their series with the Marlins at the time.  I've always loved this concept but hadn't waded into the waters yet.  Topps Now provides fans a way to buy instant memories.

These are some of the 2012 Topps Opening Day cards I recevied.  My Secret Santa must know I'm a big Opening Day guy and I had zero of these cards before they arrived.  Love 'em.  Not sure if Freddie Freeman is just intense or just struck out but he looks like someone you don't want to mess with at the moment.  Nice action shot of Chipper fielding a ball and another one from Brian McCann, who returns to the club this year. 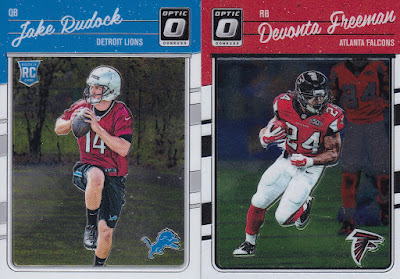 My Santa also knows my love for the Michigan Wolverines hence the Jake Rudock card.  He didn't pan out in the NFL but had a solid year with the Wolverines after transferring from Iowa.  Blue really needed someone at QB and he was that guy for a year before he graduated.  Devonta Freeman is a personal collection guy for me.  These are some really nice optic cards. 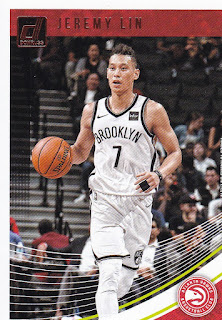 Last but not least is one of the new Atlanta Hawks.  I definitely had reservations about Jeremy Lin coming to the Hawks this year as we had just drafted a young point guard.  He's actually done a good job melding into what Atlanta is doing.  He comes off the bench as a combo guard and has averaged a solid 10 points per game but more importantly is shooting great this year at a 50/38/82% clip.  I really thought they'd flip him for another player but instead has been a solid player for the Hawks.

Thank you so much to my Secret Santa, whose identity I still don't know.  Secret Santa is great fun.  I know how tough it can be getting cards for someone else but that is half the fun.  Merry Christmas all!