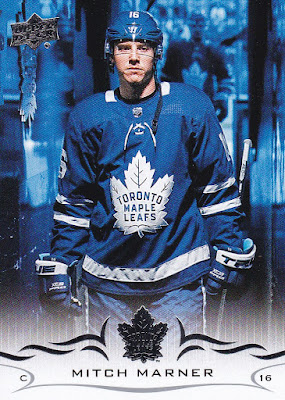 I'm a casual hockey fan at best and that may even be a stretch.  But I do like hockey cards and Upper Deck so I always pick up some if I can.  This is my first look at the 2018-2019 Upper Deck hockey.  While not an action shot this Mitch Marner card really stood out to me.  The blue from the great Maple Leafs jersey and background combine for a cool looking card.  Marner is leading the league in assists this season (had to look at hockey-reference.com).  These cards have a nice look to them.  Fairly simple giving you the player's name, number and position and the team logo though it is a bit tough to make out in the foil (in hand and in the scans).  Again I'm not an NHL expert so I'll just show off some of my pull.

Three of the four St. Louis Blues players I pulled. Someone local will appreciate these someday.

The photos really are nice.  Upper Deck always does a good job.  Personally, hockey always seems like a sport made for good photos.

I like the backs.  Simple but hits all the marks for me.