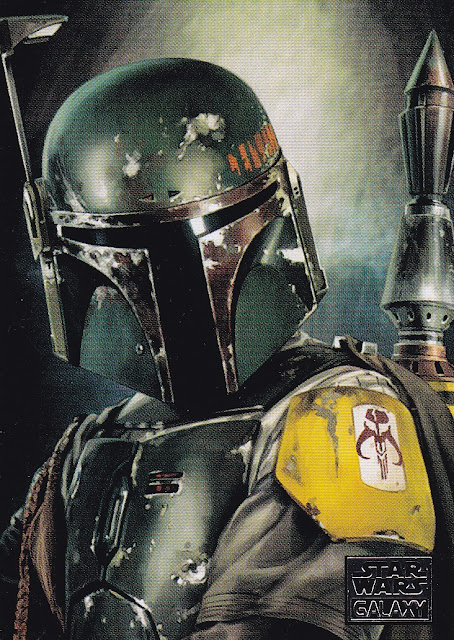 I guess I got the Galaxy bug this week posting about a pack of '93 Star Wars Galaxy pack.  I happened upon a Target and they had a 2018 Star Wars Galaxy blaster and I couldn't resist.  I wasn't disappointed.  There was plenty of variety as the art spanned all the different Star Wars universes including the movies and animated adventures.  The art itself is cool as well.  This Boba Fett really stuck out to me.  Having just showed off my new Black Series 6" Boba Fett figure probably didn't hurt but this really is a sharp looking card of one Star Wars' most popular characters.

This first card is a Galaxy Puzzle insert, that Luke Skywalker is a Legends insert and the last is one of the Journey of Ahsoka cards.  I'm a big fan of Ahsoka Tano, from The Clone Wars animated series.  She is a great character but I'm not sure these inserts, all in the red/black/white colors, do her justice.  That said I do like this particular card which was one of five I pulled of the inserts.

The backs of the base cards have decent informational write-ups.  The Two front facing cards are blue and green parallels but you can't tell in these scans.  Complete base sets can be found for cheap on eBay so I can see me picking one up at some point.

These three are inserts - Wanted Posters, Rogue One Propaganda, and New Trilogy Propaganda.

That's Captain Rex from The Clone Wars animated series.  Rex didn't follow Order 66 when it was given and lived on past the Clone Wars.  On a separate note not all the cards were hits.  Either the art seemed a bit off or the subjects and/or selection didn't seem right.  Like one card that combined Darth Vader with the Jabba's Barge.  The link there is pretty thin.  Overall though I'm very happy with the cards.  The variety is nice and the art very good.

That's a nice looking Yoda card.  Chewy looks really good on that card of the Millennium Falcon cockpit but Han's face seems a bit odd.  Could be just me.  Below is the patch card that came in the blaster.  That is the fattest Tusken Raider I've ever seen...just saying. 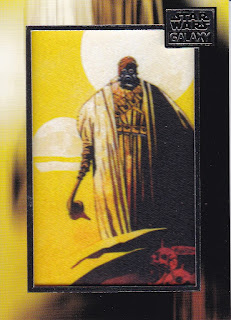