Baseball season is just around the corner so it must mean it is time for Topps baseball cards.  The 2016 Topps baseball is now out.  I really enjoyed last year's set and I think Topps did a good job again this year.  The fronts have great photos that take up most of the card with smoky corners on opposite sides of the card.  A third corner has a diagonal striping with the team's logo.  The striping is bordered in team colors.  A horizontal bar at the bottom goes across the card from the logo with the player's name and position.  This is also team colored.  This is a nice looking front that lets the photos shine through.  The fact there is no border also helps.  I really like this design.

The back has some nice color as well as the Topps staples to include each player's stats for each year they played.  This is still one of the best things about Topps cards - they don't just put a few year's stats on the cards. Just another reason to like these cards. 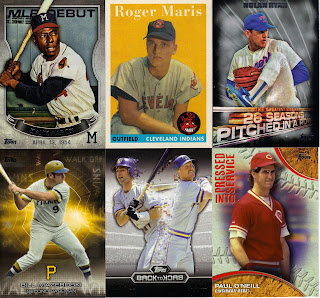 I was happy with my pulls though it was little thin on Atlanta Braves players.  To be expected I guess as bad as they were last year.  Along with the base cards I pulled future stars cards including Kris Bryant, and cards from the following inserts or subsets:  MLB debut, Bergers Best (Maris reprint), the greatest streaks, walk off wins, back to back, pressed into service, league leaders, team cards, Hollywood production, and World Series cards (quickly becoming a favorite of mine).  Quite a few offerings so that you don't get bored with the base cards.  The debut cards and team cards stuck out to me and I also think I'll like the Berger's Best set though the Maris card didn't do much for me.

I'm very happy with this set and will definitely pick up more cards throughout the year.  Next up will be the Opening Day cards.  While not that much different from the base set I still enjoy them as well.  Topps baseball also does a good job with their series 2 and updates series which just keeps the cards coming throughout the year.  If you haven't already, grab you some of these cards. 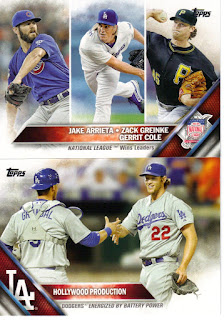