A Look Back at NBA Player Buck Williams 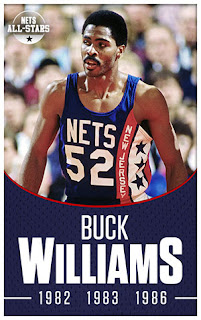 Like I did with Bob Horner, I want to look at another of my all-time favorite players.  NBA player Buck Williams was a player who I became a fan of due to his tenacious defense and work on the boards.  Being 6'8" and around 215 pounds he had to be a beast against bigger and great power forwards of the day.  He wasn't flashy but Williams played 17 seasons with New Jersey (8), Portland (7) and New York (2).  Buck was the 3rd overall pick in the 1981 draft and he was the 1981-1982 rookie of the year, a three time all-star, a member of the All-NBA second team once and was twice each named to the first and second NBA All-Defensive teams.  His best statistical years were in New Jersey where he had career highs in scoring (18.3) and rebounding (12.5).  With Portland, Williams twice led the league in field goal percentage. 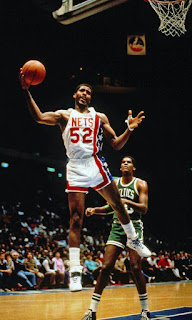 first five years with the team.  The Nets then hit hard times but Williams averaged 16 points and almost 12 boards a game while shooting an outstanding 55% from the field in his time in New Jersey.  It was easy for his great play to be missed playing on some lackluster teams.  He didn't get a ton of attention but his tough play and consistency was key to a team with big personalities like Darryl Dawkins and Michael Ray Richardson.  Unfortunately there just wasn't enough talent there to keep New Jersey in the hunt.  Prior to the 1989-1990 season Williams was traded to the Portland Trail Blazers for Sam Bowie and a second round pick.  Something else to point out during his run with New Jersey was that Williams played all 82 games in five of his first six seasons in the league which is no small feat.  The other season he played in 81 games.

Williams joined a Portland Trail Blazers team that had been ousted in the first round four years in a row and seemed to be the right guy for getting them over the hump.  Portland immediately made two trips to the NBA Finals in Buck's first three years with the team.  The Detroit Pistons and Chicago Bulls kept Portland from winning their first championship since the seventies.  The Trail Blazers are one of my teams and those losses hurt but without Williams I'm not sure they even get a shot at the title.  His defense and tenacity were exactly what was needed for a team with frontcourt players who just weren't cut from the same mold.  Portland would then go on to lose in the first round the next four years but those three years were great for Portland fans with two NBA Finals appearances sandwiched around a Conference Finals appearance.  Williams left the Trail Blazers as their all-time leader in field goal percentage.

Williams' last two years in the league at the playing ages of 36 and 37 were largely forgettable but those teams did go to the playoffs each year with the Knicks bowing out in the semis.  Williams' playoff totals throughout his career were very close to his regular season stats though he did average 24+ points for New Jersey one post season while averaging over 14 boards a different post season also for the Nets.  I always think it is great to see players who can step up their own game against the better teams in the league during the playoffs.  Williams also played a role off the court as the President of the NBA Players Association from 1997-1999.  His number 52 was retired in 1999 by the New Jersey Nets. 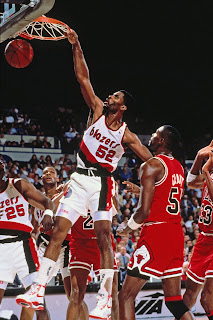 After Dominique Wilkins, Buck Williams is my next all-time favorite NBA guy.  I can't pinpoint why but I do know his play on defense and around the boards were a big part of it.  And he just had the look of player you didn't want to mess with.  And come on, his name was Buck.  I was a big fan long before he joined Portland but that was just the icing on the cake.  To see him be part of those fun Trail Blazers teams with Clyde Drexler, Terry Porter, Kevin Duckworth, Cliff Robinson and Jerome Kersey was great.  They were a special lineup in the history of the franchise.  I enjoy these looks back at players and will continue to look at players whom I've rooted for throughout the years in future posts.