A Look Back At Bob Horner 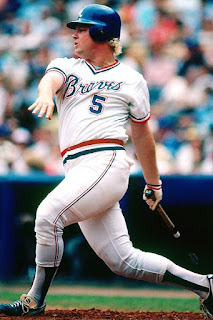 Baseball season is closely approaching so I thought I'd do a look back at my all-time favorite player, 3B/1B Bob Horner.  Like many people I tend to latch on to a guy for no real good reason but I root for them in thick and thin.  Part of being a big Horner fan I’m sure coincided with me starting to watch baseball about the time he entered the sport.  Horner played 10 seasons in the majors.  Nine were with Atlanta from 1978 through 1986 before playing one final season with St. Louis in 1988.  1987 he played in Japan.  After being the #1 pick in the 1978 draft, Horner went straight from the college campus to the majors.  He justified his status as a #1 pick by being chosen as Rookie of the Year for 1978.  Horner was as a third baseman by trade but by 1985 he was playing first base full time.  He was not a good defensive third baseman so the move to first was a good one for him.  Horner was hindered by injuries the majority of his career with lingering wrist problems being the major culprit.  Had Horner been able to average more than 102 games per season his career definitely could have been viewed differently.  As is, he was a good power hitter who under achieved.

Again he started out well his rookie year with 23 homeruns in just 89 games.  1979 and 1980 saw him playing in 121 and 124 games respectively.  He hit 33 homeruns in 1979  and a career high 35 in 1980.  His power numbers were excellent while he wasn't a huge strikeout guy, something you definitely like to see.  Unfortunately he couldn't stay on the field long enough to max out his potential.  1979 may have been his best year with career highs set in average (.314), slugging (.552), and runs batted in (98).  1981 was a strike shortened year and Horner was only able to stay healthy for 79 of the 107 games Atlanta played.  But again he put up good stats when he was able to play.  He again reached 30 homeruns in 1982 putting 32 over the fence earning all-star honors for the only time in his career.  1982 also saw him reach the playoffs for the only time though he struggled mightily batting only .091.  That was 1 single in 11 at bats against the eventual World Champion St. Louis Cardinals, a horrible effort. 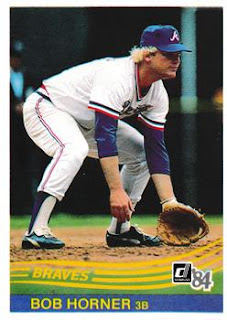 The next year was a great year at the plate though it was again shortened by injury.  His .383 on base average far outpaced any other year of his career but because he only played in 104 games he only racked up 20 homeruns and 68 RBI’s.    The Atlanta Braves of 1984 won only 80 games and the team went into a decline that wouldn’t end until 1991.  Horner was only around for 32 games due to injury only putting up 3 homeruns.  This was also the year of the infamous Padres – Bravesbrawl.  Horner played a part in that he was injured at the time and in press box.  He went to the locker room and  changed into uniform before going to the dugout.   I watched this game live as a teenager and loved it.  Can’t say it was right but I enjoyed the heck out of it.  In 1985 he rebounded with 27 homeruns and 89 RBI’s but batted a career low .256.  Still a good year but he was only on the field for 130 games.  Horner played a career high 141 games in 1986 again registering 27 homeruns and drove in ’86.  He even hit four homeruns in a game that year tying the major league record.

You couldn’t ask for much more than this.  Two good years heading into free agency.  But this is where it gets weird.  Bob Horner was only 28 years old and had already hit 215 homeruns in his th in the league with 31 homeruns, 4th in batting (.327), 2nd in OBP (.423), and 1st in slugging (.683).  They loved him.  He was in his prime and he feasted on Japanese pitching before they decided to pitch around him instead of challenging him.  All that did was frustrate Horner who left after one year though he had probably made the biggest impact by any American on Japanese baseball.  He left $3M on the table and returned to Major League Baseball and the St. Louis Cardinals for $950,000.  I still hadn’t forgiven the Cards for beating the Braves in the ’82 playoffs so I really wasn’t on board with this.  To me he should have been a Brave for life.  Still you root for your guy, right?  His stint with St. Louis was not a great one.  St. Louis needed a replacement for Jack Clark who left the cards via free agency but Horner struggled.  He battled injuries, could no longer generate power and played his last game on June 18 of that season. 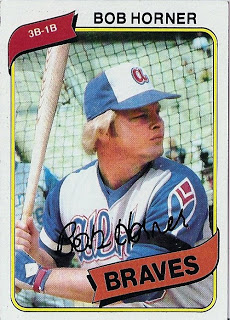 career.  Even for someone with his injury history he should have been a free agent who could easily find a home.  Then there was collusion.  Teams got together and held down the salaries of players.  While this was underhanded Horner still made a bad misstep.  He headed for Japan.  Horner played one year for the Yakult Swallows having a very good year at the plate.  Though he didn’t play a full season he was still 5

Bob Horner was a good player who was riddled by injuries that hampered his career.  Combined with his decision to go to Japan and his subsequent decision to leave Japan he will never be much more than a distant memory of Braves fans.  If healthy and playing to age 35 Horner was a guy who could have easily had 400+ homeruns.  I also think that if he had had a few seasons of 155+ games he might have put up a monster year in there somewhere.  Maybe 45 homeruns and 110 runs batted in.  It is always fun to play the “What if?” game but when wondering what injuries robbed a player of it is tough.  You also have to wonder what it would have been like had he stayed in Japan.  If he had continued to put up numbers like he did in 1987 he would have been a cult hero there.  Again, “What if?”.  No matter.  He’ll always be that guy for me when it comes to baseball.  There are many others who I’ve rooted for but Horner is my favorite. 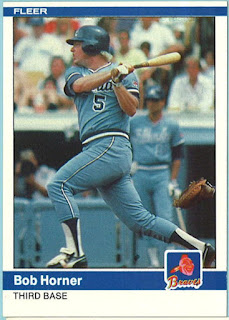