The 2015 Atlanta Braves finished 67-95 last years, 23 games back of the New York Mets.  This year's team doesn't give me much hope that they will do better than the 2015 version.  In 2015 Atlanta used 60 players in total and 37 different pitchers while trying to figure out who they were.  Looks like these numbers were the most ever by a Braves team.  And they are still trying to figure things out.  This year will need a lot of things to go right for almost anything good to happen.  This team is clearly in rebuild mode leaving only Freddie Freeman and Julio Teheran as future building blocks from what was a 96 win team in 2013.  Andrelton Simmons and Shelby Miller, whom I thought was part of the rebuild have been traded, pushing out any hope of being a decent team a few years out.

Catcher AJ Pierzynski returns after an excellent year in which the 38 year-old batted .300.  It is hard to believe Atlanta will get that from him again this year but he is a good veteran presence for the pitching staff.  Not sure who the catcher of the future is but AJ has the stick for now.  Freddie Freeman will again anchor first base.  Freddie is a stud but has nothing around him in that lineup.  He hit .276/.370/.471 with no one to protect him.  Jace Peterson returns at second base. He has to cut down on the strikeouts (120) while getting his average (.239) up to be anything near effective.  Erick Aybar is the SS they received from the Angels in the Simmons trade.  He is just a place holder for super prospect Dansby Swanson whom they received from Arizona for Miller.  Adonis Garcia is the third baseman and his 10 homeruns and .497 slugging in 198 plate appearances last year is encouraging but his .293 on base percentage is not.  Hopefully he'll be able to get on base more while giving Atlanta a much needed power threat to complement Freeman.  Also I hope he found his fielding glove or he may just give back everything in field he provides at the plate.  BOTTOM LINE:  Freeman is Mr. Steady but what the rest of the infield will provide is anybody's guess.

The outfield should field Nick Markakis, Ender Inciarte, and Hector Olivera.  Markakis had a good year albeit with almost no power with three homeruns in 612 at bats.  Again a very good year batting .296/.370 but getting no power from a corner outfielder is hard to swallow.  Ender Inciarte also comes from Arizona in the Miller trade and  looks like a nice center fielder.  He hit over .300 last year and hit .278 his rookie year.  I think he is a nice piece for a team who didn't have a long term answer in center.  Hector Olivera comes over from the Dodgers.  He hasn't played in the majors yet so this should be interesting.  He will turn 31 this year so he needs to produce soon as there isn't a huge window for him.  He also has an injury history but for now I'll hope that he'll live up to some of the hype.  If someone falters Nick Swisher could log major innings for the Braves.  BOTTOM LINE:  Should be a nice outfield but whether or not it is a very good one will depend on Olivera.  If he falls flat I'm not sure what plan B is.  And Atlanta must find some power out there somewhere.

The starting pitching could be fluid.  Julio Teheran is back after an 11-8 season with a 4.04 ERA.  Not his best year but this was a bad team.  To have a winning record was minor miracle.  He and his 200 innings will anchor the staff.  Bud Norris had a horrible year with Baltimore and San Diego, and his spring training is not going so well, but will probably be one of the starters to begin the season.  Matt Wisler returns after a decent rookie effort going 8-8/4.71 ERA/109 innings.  Hopefully he can build on that and be a 30 start guy.  After that it is sketchy.  Williams Perez, Mike Foltynewicz and Jhoulys Chacin are all in the mix.  I have no idea what this staff will provide.  I like Teheran but after that I just don't know.  We may see a revolving door if these other guys can't be steady on the mound.  BOTTOM LINE:  The defense had better be good behind these guys because I think opposing teams will be able to hit them.  This is the weakest link in my eyes on a team that will be pretty bad.

The bullpen will be serviceable.  I'll take that for now.  While Arodys Vizcaino is the closer of the future I wouldn't put it past Atlanta to use veteran Jason Grilli in that capacity early in the season to showcase what he can do and use him as trade bait though Grilli is dealing with injury which may cement his spot as a setup man.  Atlanta traded for former Brave Eric O'Flaherty due to issues with the other left handers in our bullpen.  Not a good sighn.  BOTTOM LINE:  Otherwise I think the bullpen will be ok if not spectacular.  Just need to get to Vizcaino or Grilli in the 9th and things might be ok.

I am not sure this team is as good as last year's and it only won 67 games.  This could be a horrible year.  The upside would be all these young guys play up to potential or expectation and things click.  It worked for the Cubs.  But this team isn’t full of grade A talent prospects like they were.  Even at their best this team isn't a contender so it doesn't give me much to hope for.  Still I am looking forward to seeing what some of these young players can do.  Who is Olivera?  Can he be a nice bat in the outfield?  Will infielders Garcia and Peterson have solid years?  I'd like to see Arodys Vizcaino do well again.  So while my hopes aren't high there are plenty of stories within the team.  And hope is all I got this year... 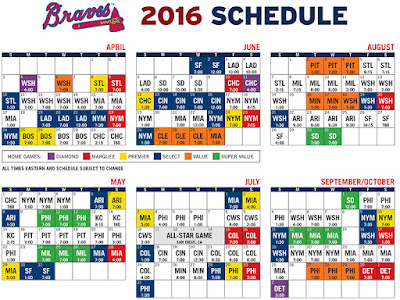