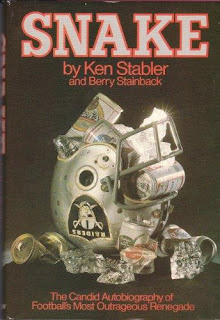 Last week I finished Ken Stabler's autobiography, Snake.  It is exactly what you'd expect it to be.  He goes right into the training camp  hijinks which is something he and the other Raiders were known for.   We all want to hear about the dirt in books and this has plenty of it.  But no matter how bad the debauchery Stabler and his band of merry men get into they never come off as bad guys.  Just guys looking for fun which is what they found almost every time.  My formative sports years were when the Raiders and Stabler were at their legendary best so I loved the legend that was Stabler.  And what kid didn't love the RAIDERS?  The silver and black, the attitude, the look and the talent to back it all up.  They had it going and Ken Stabler was front and center. 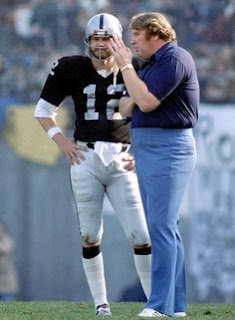 Stabler played 15 years starting in 1970 after Starring at Alabama under Bear Bryant in college.  Stabler and those Raider teams were unfortunate in that Pittsburgh was also in their prime during the seventies.  This led to many years of frustration though Stabler reached the AFC Championship game four times outside of the year they went to the Super Bowl.  The Raiders and The Snake won the Super Bowl together in 1976 defeating the Minnesota Vikings.  John Madden was the coach for most of Stabler’s Raider years and it was great to read about their relationship and to get to know him somewhat better. 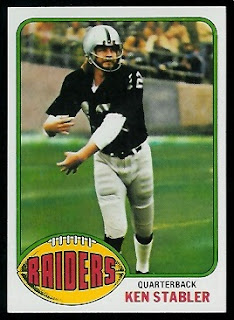 Stabler does a good job writing this book.  He throws himself out there at the beginning so there are no surprises.  He then leads you through his life in an entertaining fashion.  All the while he brings along all the characters in his life who we get to know well.  It is just a fun easy read.  I’ve always been a fan so it was a highlight of mine to get to read his book though it is sad due to his premature passing after dying of colon cancer last year.  One of things he had looked forward to was a spot in the NFL Hall of Fame.  Sadly he was announced as a 2016 inductee this January.  Still he had a fabulous career that was already much celebrated.  He was a four time pro-bowler (when it mattered) and a one-time first team all-pro.    I think any football fan will enjoy this book.  It is entertaining while giving you plenty of insight into his football and private life.  This book is out of print and hard to find but make the effort.  It is well worth it.
Posted by Bulldog at 6:51 PM