I'm back with more of the 2019 Topps Baseball from the hobby box I broke.  The Marcus Semien card, outside of being a nice photo, is one of the 150th Anniversary cards as seen by the stamp.  The Albert Pujols and Mookie Betts cards is one of the checklist cards.  I like that they've made the checklist unique with photos that aren't the norm.

There were four chrome promo cards in my 1984 Silver Pack.  I didn't pull any parallels but was very happy with my pull that included Hall of Famer Rickey Henderson in a great pose, future Hall of Famer Derek Jeter and the reigning National League MVP Christian Yelich.  I'm not a big chrome guy but I do like these cards.

A couple of the big stars from the league in Clayton Kershaw and Aaron Judge.  I pulled them both in one of my last packs from the box.  The Home Run Challenge card has a scratch off on the back and it is part of a game in which you can win prizes picking when a player will hit a home run during the season.

Just showing off now.  Sean Doolittle has that unique stance while on the mound that is kind of cool.

A couple of great photos here.  David Price is so intense and I like how the ball is shown in the foreground.  George Springer is laid out and it looks like this might be a bang bang play at home.  I like this photo.

I must have really liked this Semien card as I scanned it a second time.  I do know I'm a fan of those all green unis so I'm not surprised that I'm drawn to the card.  All three are nice action photos.  I'll grab more of the Topps flagship set throughout the year for sure.  I like this set and there are plenty more cards to grab.  I'll also be picking up an Opening Day hobby box if all goes well.  Check back in March to find out for sure. 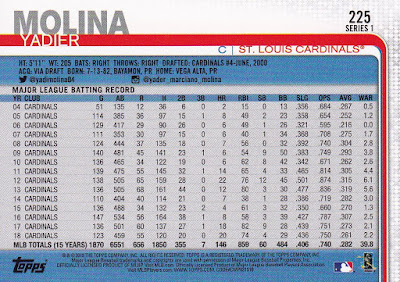