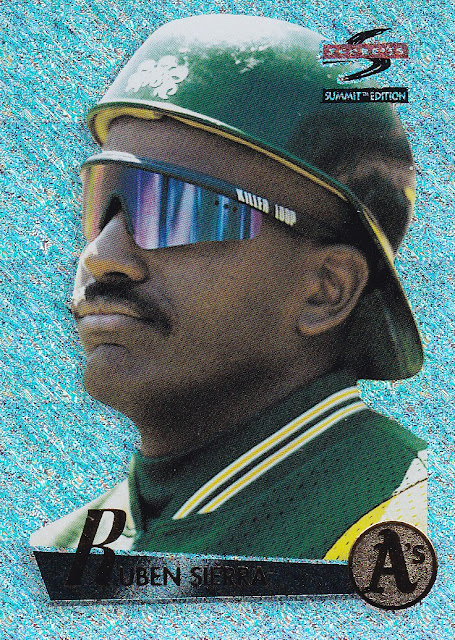 Colbey over at Cardboard Collections did another of his great affordable breaks on Saturday night.  This month's boxes included 1995 Sportflix, 1995 Summit, and 1995 Zenith baseball. He broke the three boxes live via Twitter but has also done them live on Facebook in the past.  I purchased two teams - Boston and Oakland.  Everyone who bought in received a random second team and mine were Milwaukee and Texas though I traded Texas for the Angels. In this post I'll show off the highlights of the cards I received from each team. I'll start with this great looking Summit Nth Degree card of Ruben Sierra.  This card is great in hand.  Seeing it pulled on video I didn't quite get it but I do now.  Great card stock and a sweet look.  This is one of two A's Nth Degree cards I received.

These Summit card are on a nice card stock and are my favorite of the three sets.  That's a nice Eckersley that'll go into the personal collection (PC).  So will Rickey but the closed eyes isn't a good look.

These Sportflix actually scanned better than I expected.  You can almost see the different poses.  All three of these beauties will go into the PC.

The Zenith are a bit different and you can see what they were going for even if it wasn't the norm for the day.

I always liked Mo Vaughn and I think he is a well liked Red Sox among fans.  Jose Canseco of course was always entertaining if not a head case.  And The Rocket...could have been so much more.  <sad face>

Mike Greenwell was such a good hitter (.303 for his career) and played his entire career in Boston which lasted 12 seasons.

I think all three of these are great photos of the guys in action.

I was so glad I traded for the Angels.  They are usually scooped up by another blogger so I didn't even think about them as an option.  Chili and Tim are PC guys as is Bo though I didn't pull his Summit card.

J.T. Snow was another good hitter from the era and that is a great photo.  The Garret Anderson rookie is very nice and he had a good career.  Mark Langson and Chuck Finley are also PC guys from this Angels team though I only grabbed a couple Finleys.

A couple of highlights from the Brewers cards I received.  Colbey threw in some extra packs for the fun of it hence the '87 Topps.  This break was a lot of fun and I'm very happy with the cards I pulled.  I highly encourage everyone to check out Cardboard Collections and his fun breaks.