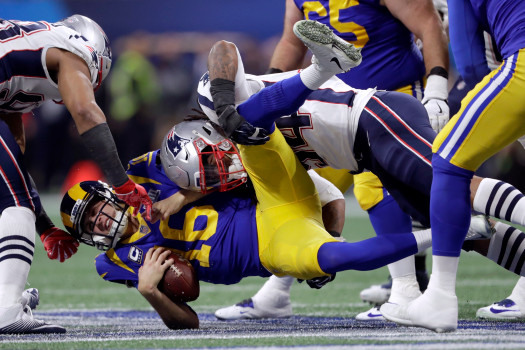 Last night was a great SuperBowl.  I know I’m in the minority on that but in an era when the offenses are handed so many advantages it was great to see two defenses play so very well.  NewEngland was able to move the ball some but Wade Phillips’ defense played so well limiting the Patriots to 13 points.  No matter how great they were they were outplayed by the Pat’s defense who befuddled Los Angeles all night long.  It was an amazing game plan for the Pat’s defense and Jared Goff seemed lost all night.  But don’t be fooled.  So props to the New England coaching staff and the players who executed the gameplan.  While the offenses did make mistakes what you really saw was the defenses getting pressure on the quarterbacks and covering receivers very well.  So good on both defenses.

As for the Rams, Sean McVay has to take blame for the offense’s inability to adjust during the game and to his credit admitted he was out coached.  I also have to wonder why Todd Gurley wasn’t given the ball more. He is a rare talent at running back but ran the ball only 10 times for 35 yards and caught one pass.  The game was 3-3 going into the 4th so they had plenty of time to run it and maybe create opportunities for play action.  Maybe try some screen passes?  I was at a loss as to Los Angeles’ lack of direction and creativity.

The Patriots deserve a ton of a credit on defense but the offense did do enough when needed to win the game.  Julian Edelman starred and took home the MVP.  He seemed to be open so much in this game and it wasn’t until late they Gronk really got in a groove.  To be honest the defense deserved the trophy.  Again I think it is awesome a team could scheme so well as to shut down an offense that stood among some of the greats all-time.  You have to hand it to New England.  Bill Belichick figured out a way to win even when his offense wasn’t at its best.  It is just amazing what he and Tom Terrific has done.  I enjoyed the game and ate lots of good food in the process so it was a win all around for me.