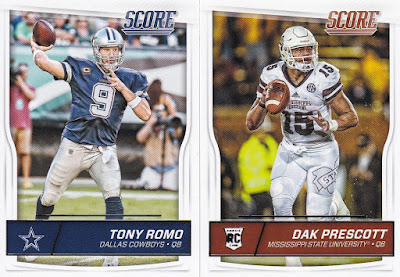 No surprise I'm back with another pack of the 2016 Score football.  I like the design and variety this set has to offer.  To start we have Tony Romo and his replacement Dak Prescott whose showcased in his Mississippi State uniform.  I like both players and I really like Romo as an announcer.

Von Miller is still a dominant force in the NFL and this is a nice photo where he has his "eyes on the prize" as he beats an offensive lineman around the corner.  A buddy turned on the Eagles game last week and thought he was transported back to 2007 when he saw Darren Sproles splaying.  Sproles is still a key contributor at the age of 35.

I do like the photos in this set.  The design lends toward being able to show them off which is always a good thing.

Hey a Buffalo Bill! ...who had a great year for the LA Rams totaling 86 receptions and over 1200 yards.  Just kind of knew he'd be able to put up good numbers playing with a good quarterback. 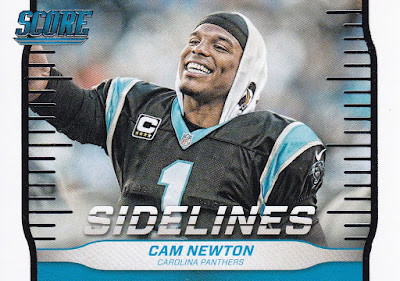