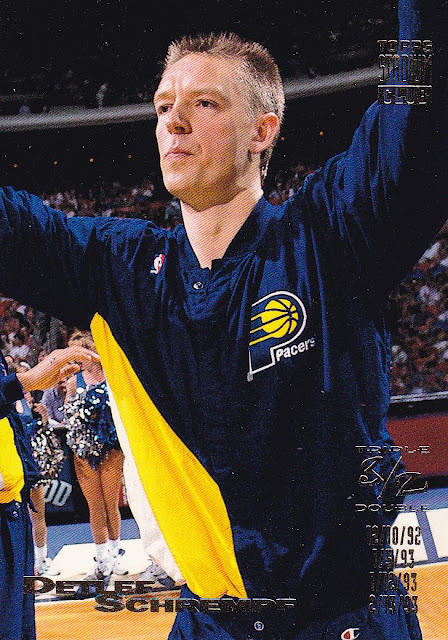 The NBA playoffs start today so how better to kick today off than with a lot of Detlef Schrempf cards I recently purchased on eBay.  I was able to pick up 55 cards for just under $6.  Win!  I've just started paying more attention to my favorite players/personal collection guys and my Detlef collection was sorely lacking.  He's a top 10 all-time favorite NBA guy for me.  He was fun to watch, an easy person to root for and man can he rock the flat top.  Plenty of great and fun cards here.  Enjoy!

He is also someone who has used his place in life to help others which is wonderful.  He has been very charitable away from the court trying to help those who need it.  Good on him.

I think his skills really would have translated well into today's NBA.  He could put the ball on the floor, rebound and pass as well as score.  Definitely a guy who would could help facilitate an offense with his skills.

He played a total of 114 playoff games and reached the finals once with the 95-96 Supersonics.  Nice looking jumpshot, photobomb by Larry Legend, and I think the only smile I've seen, so far, on a card.

COMC is a great resource but eBay is still where I pick up sets and subsets for cheaper.  I know that isn't always true, and I just recently picked up a 12 card set on COMC for much less than I could find it on eBay.  This was a great buy and very happy to finally have a Detlef Schrempf collection worth showing off.