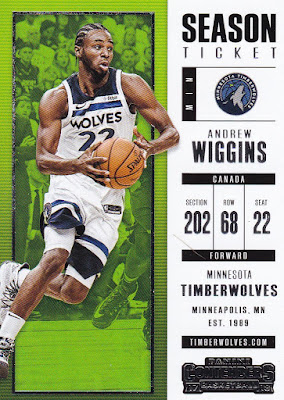 Been looking forward to the 2017-2018 Contenders basketball since I enjoyed the 2017-2018 Contenders Draft Picks cards.  Another nice set of cards I like.  While similar to the last set it has the "ticket info" in a vertical alignment on the side this time as opposed to at the bottom.  The photos aren't full bleed with the backgrounds highlighted in a team color putting the player front and center.  The numbers on the front relate to the player's weight (Section), height in inches (row) and jersey number (seat).  Also has a nice team logo.  I'm happy with these cards and the design.

The backs duplicate the photo from the front which is now completely shaded in team color.  No stats here.  Instead you'll see a write-up.  I like these backs though a few stats wouldn't have hurt.

The Porzingis card is a Game Ticket card.  I've even seen these specific cards listed as parallels but since they have a different name it seems appropriate to be it's own card.  Besides the difference in card name the other difference is the lettering on the front is not in silver foil but in red foil.  Can't really make it out on the scan I know.  The Winning Tickets card isn't bad but the photos are really small and it looks like a stamp.  Probably my one negative here is the lack of retired greats in my pull.  They were prominent in the Draft Contenders blaster I opened (6) which as a big plus for me.

Player's photos have them in their new team's jersey which is good.  I was happy with my pull.  Plenty of stars and no duplicates.  The Draft Contenders autograph I pulled came from a blaster box.  I really wanted to grab one today but found both these and the new Prestige cards so I decided to grab both as opposed to just a blaster box which guarantees an auto or relic.  Blasters contain 40 cards.  I'll pick up more of these as again I like these cards.
BREAKOUT:
44 – Total Cards (2 Packs)
2 – Winning Tickets
2 – Playing the Numbers Game
2 – Game Ticket Parallel