The Atlanta Braves enter the season with hope, maybe not for this season, but for future years.  The Braves won 72 games last year and will probably be around that number come the 2018 season’s end.  Freddie Freeman once again leads this team in star power while 2017 All-Star Ender Inciarte anchors centerfield.  Nick Markakis is steady if not flashy and the catcher position is manned well with veterans Tyler Flowers and Kurt Suzuki.  Shortstop Dansby Swanson hasn’t corrected his issues at the plate and 3B isn’t a known quantity yet.  Outfield mega prospect Ronald Acuna is expected to be called up after a short stint in the minors and much is expected out of second year player Ozzie Albies who batted .286 in 217 at bats last year.  The Braves are at least a year away until the offense is expected to really click.  Hopefully the young players will gain experience this year and be ready next year to take it to the next level.  My thinking is the Braves are still a few players, whether they are players in their minor league system, or external from having a good offense.  I think 2020 is a better expectation for seeing that jump in production. 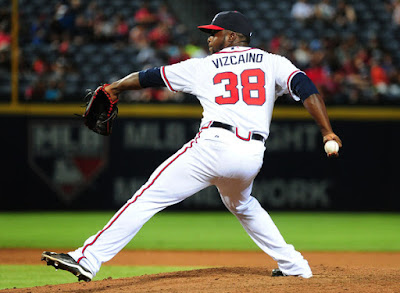 Pitching last year was bad with starter R.A Dickey leading the way with a 4.26 ERA among starters and the closer, Jim Johnson, had 22 saves ending up with a horrible 5.56 ERA.  Still the bullpen had some good pieces with Sam Freeman and Arodys Vizcaino having sub three ERA’s while the latter is slated to take over the closer position this year.  It is believed he could be a shutdown closer in future and did notch 14 saves to go along with 10 K’s per nine innings last season.  Jose Ramirez is also back after posting a solid 68 innings of work.  The starters will really need to step up for the pitching staff to make any type of positive jump.  If it doesn’t the team will again look like a contender for the National League East basement.

The team is rebuilding and enough said.  We as fans don’t like it but I don’t think spending a ton of money would have fixed this team.  Right now we have to hope that the young talent can make some strides and look towards a season in the near future in which we can see the light at the end of the tunnel.  Go Bravos!