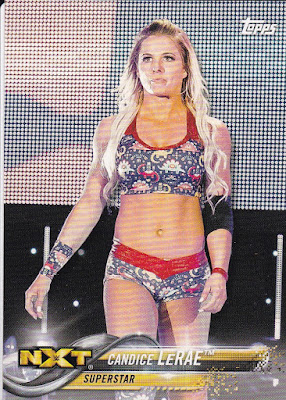 I've seen the 2018 Topps WWE Then Now Forever described as a series 2 or update to the main set.  I don't know the majority of these wrestlers but again I'm a casual WWE observer at best.  Overall I like the designs of the base cards and the photos on them.  The WWE seems to lend itself to cards.  I do think more action shots would be beneficial here though if a wrestler is only getting one card I could see the designers wanting each card to showcase a body shot of each.

I didn't see any in the ring action shots which is something I do like.  Most show wrestlers as they enter the arena.

The WWE Legend I pulled was Curt Henning AKA Mr. Perfect.  Each pack comes with a Shawn Michaels tribute as well.

Here's a few of the 25 Years of Raw cards.  I won't grab more of these but as always I enjoy picking them up WWE cards to see what Topps is doing with them on their cards as well as to bring back memories of when I followed the sport more.