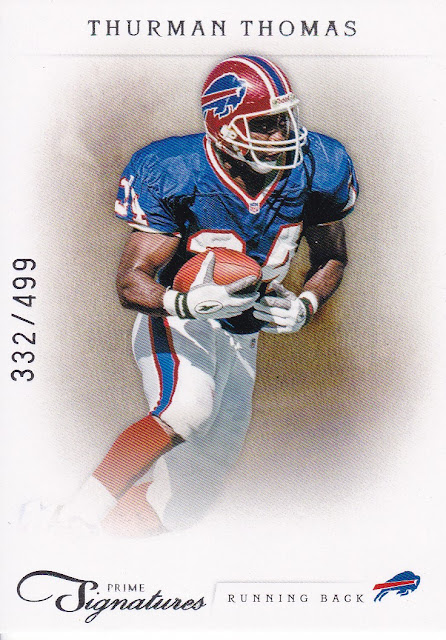 Wanted to take a quick look at the random football cards I grabbed at the card show last month.  I really liked this Thurman Thomas 2012 Panini Prime Signatures card so I picked it up.  The base cards are all numbered to 499.  The card is a thicker stock which normally I shy away from but I really do like the design and photo of this personal collection guy.

Grabbed a pack of 2010 Score Football which I've never seen before.  I pulled a Falcon, rookie Rob Gronkowski and Phillip Rivers which will all go into my personal collection so this was a nice pack.  I like the design though the white borders could have been a bit smaller in spots.

Another pack I picked up was the 2010 Panini Adrenalyn XL.  These are part of a trading card game which was new to me.  Not something I'd pick up again but for a buck the pack was worth a shot and the design isn't too egregious considering it is designed for a game.