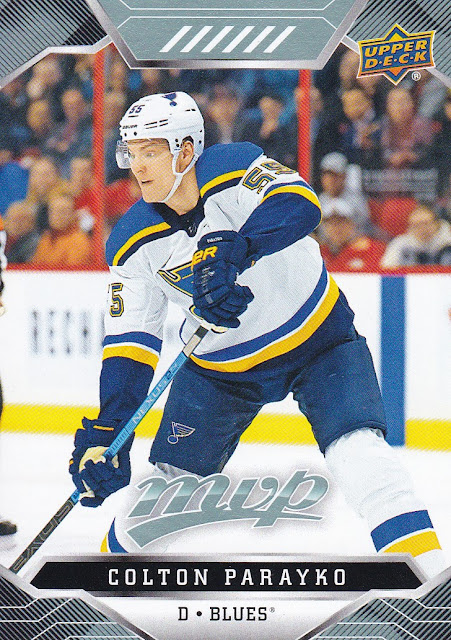 This 2019-2020 Upper Deck MVP Hockey pack seems a good way to start the weekend with hockey now in full swing.  As with all hockey posts I caveat this with the fact that I'm not the biggest hockey fan but I do like the game and just don't have the time in my sports fandom.  That said I watched quite a bit of the playoffs as the local team, the St. Louis Blues, made their magical run to their first NHL title.  I count the Flames and Bruins as the teams I follow.  The Colton Parayko card seems a fitting way to kick off the post.

The Boston Bruins were well represented with four cards including the only Rookie card in the pack.

I'm disappointed by the lack of a team logo on the fronts which are OK but not overly special.  The MVP logo takes up a bit too much space for my liking.  So I'm OK with the design and cards but nothing more.  The backs are fine but it seems like the stats could have taken up more of the card with a larger font or format.  The Dylan Larkin card is a puzzle card parallel with part of a puzzle being on the back of the card.  Each puzzle parallel is part of a nine-piece player puzzle with there being many different puzzles of NHL players.

The photos don't stand out like they normally do in Upper Deck's flagship hockey sets.  I feel like I'm basically looking at the same photo with only the player changing on each card.

I won't search out any more packs from this set but I am looking forward to the flagship release which will come the first week of November.
BREAKDOWN:
34 – Total Cards
1 - Rookie
1 – Puzzle Back Parallel