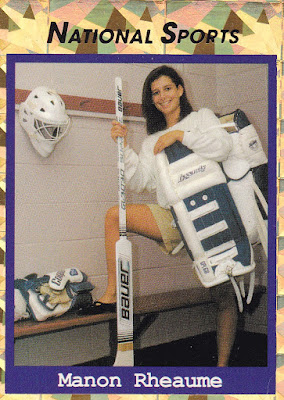 I don't know if it is cold where you are at, but it is cold here in Southern Illinois so hockey seemed like a good subject on this chilly New Year's day.  Billy Kingsley at Cardboard History, a must read by the way, showed a card of Manon Rheaume not too long ago and it reminded me I had some of her cards so I had to dig them out. Rheaume is the only woman to have played in an NHL game when she played goalie for the Tampa Bay Lightning in a 1992 preseason game.  While Rheaume would play some in the IHL, ECHL, and won a silver medal with the Canadian women's team in the 1998 Olympics, motherhood called and was the priority in life.  I dug out my 13 cards of her cards all coming  from Classic with the exception of a National Sports promotional card.  I believe this card came from a National Sports Collector's Convention and it may have been from the one I attended sometime in the early nineties.  Definitely a cool accomplishment and I enjoyed seeing her make it onto trading cards at a time when they were dominated by men.  Apart from the promo card I have the 1992 Classic Draft Picks #59, #1-7 and #100 of the 1993 Classic Pro Hockey Prospects, #253 from 1993 Classic Four Sport Collection, and 111 and 147 from 1993 Classic Images.  This is a great memory if nothing else and I'm glad I kept these cards.  This is all about fun for me and this trip down memory lane was hoot.