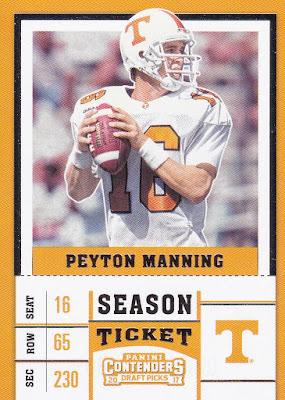 I'd seen these 2017 Panini Contenders Draft Picks Football blaster boxes from time to time but hadn't picked one up.  I do have some singles I've picked up over the years though.  These blasters guarantee two autographs though I pulled players who have played a combined one game in the NFL.  This particular year's design has the "ticket" information at the bottom.  This does minimize the area for the photo some.  Still I like the design and these cards as a whole.  Contenders is a brand I really like across the sports and this is a nice set and won't hesitate to pick up more as I get the chance.

The big draw for me is definitely the retired legends and current players in their college unis.  This blaster definitely didn't disappoint. Plenty of great players from different eras showing off their school colors.  Speaking of color, it is curious as to why they'd use a black and white photo for the Tony Dorsett photo.  It seems out of place since he played in an era when color photos were plentiful.  On the fronts of these the player's uniform number, height and weight as always, are the ticket information (Seat, Row, Sec) respectively.

These inserts are nice.  Plenty of color and again it's cool seeing these players in photos from their days in college.

I have to admit when I first saw the Bo Jackson card I thought it was a relic but it was not.  A blonde moment I guess but I love Bo and was very happy to pull him.

I really like both of these cards.  I'm a big Todd Gurley II guy and like the look of this card.  I know Fournette had a tough year but he was really good and 2017 and you'd have to think there's a chance he can recapture that magic again. 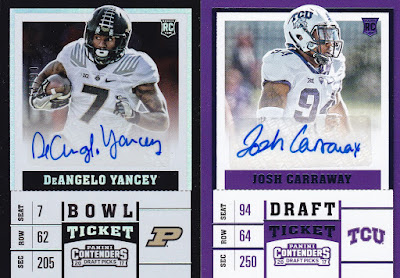