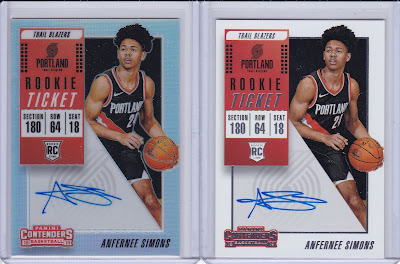 I see guys purchasing their teams for a box or case break so I was very excited to purchase the Portland Trail Blazers for a case break (12 boxes) of the 2018-2019 Contenders basketball.  While I originally wanted the Atlanta Hawks the prices were well over $100 before those auctions were done.   The Trail Blazers were still over my budget but I got caught up in the frenzy of the last minute bidding and grabbed them for $32.  I pulled both a Rookie Ticket base auto and a Rookie Ticket premium auto of Anfernee Simons.  Simons hasn't really stood out to this point but they are some nice cards.  Premium parallels are shiny versions of the base card.

I've done enough research on breaks so I know how they work and what terms to watch for.  This one was pretty straight forward and for my money I received all the Trail Blazer cards pulled during the case break.  The checklist for this set came out real late and I hadn't looked at it and it may not have been out when the break took place.  When I watched the break I quickly figured out that there were only three base cards for Portland.  So I was basically betting on grabbing some good parallels, relics or autos.

For me it isn't all about the relics and autos in a break but I did do well pulling two autographs.  I do have a ton of the base cards of Nurkic, Lillard and McCollum and also received two premium Nurkic cards as well of a Playing the Numbers Game insert.  This was a fun break and the seller showed the break live via YouTube which is exciting to watch.  Whoever purchased the Los Angeles Lakers was the big winner.  They pulled four Lakers autographs and a 1/1 LeBron James Championship parallel.  Wow. 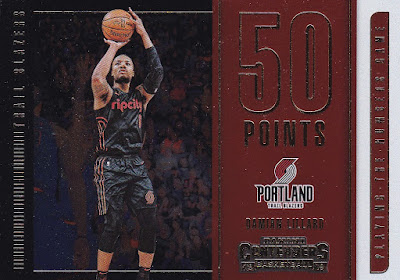