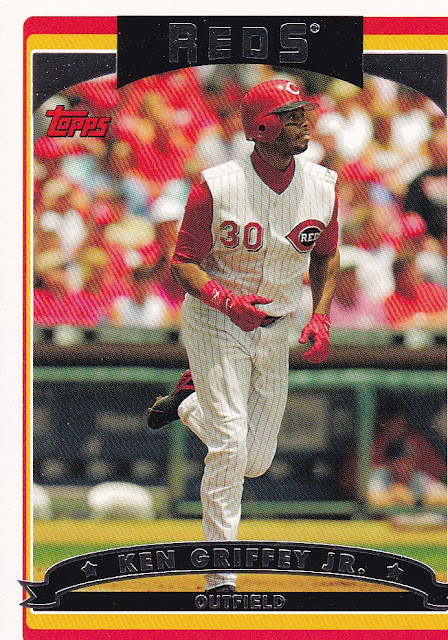 This will be my first post on those packs from the Wal-Mart 50 Pack Combo purchase.  I've never opened, or to my knowledge owned, any 2006 Topps baseball until this rack pack that came as part of the combo.  This Ken Griffey Jr. card highlighted the pack which included three hall of famers and a World Series winning manager.  The rack packs have a total of 21 cards.  Eighteen of those are 2006 Topps and three cards from past Topps sets.  My three were from the eighties though none were notable players.

The cards themselves have a good design and the wording in foil isn't as hard to read as it appears in the scans.  I like the different shots of the players even if they weren't all action shots.  Jeff Bagwell during introductions is a cool card though again it isn't an action photo.  I like the look on Ivan  Rodiguez's face in his Up The Middle card with Carlos Guillen.

Team cards are part of the base set while the Hit Parade inserts highlight hitting accomplishments.  This was a really fun pack to break as it was my first time seeing this set.  It was a very cool inclusion in my combo by.