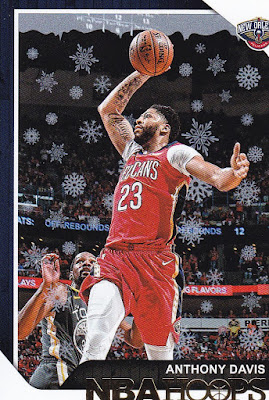 I've been eyeing these 2018-2019 Hoops Holiday cards for some time.  The best way to think of these is a blaster full of nothing but winter parallels and the print run for these must be less than the standard cards.  These blasters also guarantee a hit which for me was a T.J. Leaf Rookie Remembrance Relic which I show at the end of this post.  This Anthony Davis card shows off the snowflakes really well.  You can't see them that well on all the cards but you can on the majority and I like these overall.  They are just different enough from the standard cards to get my attention, snow flakes are cool and they aren't any more expensive than the standard cards.

These are all from the Hoops Tribute subset that is a mix of current stars and retired greats.  You can't really tell but the Kevin Durant is a Winter Purple parallel.  I really like this subset and actually just picked up that Dr. J standard card on COMC.

A really good pull though I wouldn't call it great.  With 300 cards though your not going to nab a LeBron in every pack.  Nice card of Andre Drummond skying to the rim.  Al Horford will go into my personal collection and you can't go wrong with Ben Simmons right now.

As you can see the snowflakes are pretty much a non factor on some cards like this Og Anunoby card.  After an inconsistent start Kent Bazemore has been a better scorer for my Hawks most of December.  Tough news for John Wall and the Wizards as he'll be out the rest of the season due to wrist surgery.

Cool Greek Freak Get Out of the Way insert and I really like the Knicks' NYC jersey Kristaps Porzingis is wearing on his Lights Camera Action insert.

I think this is my first Otto Porter Jr. card of the year. 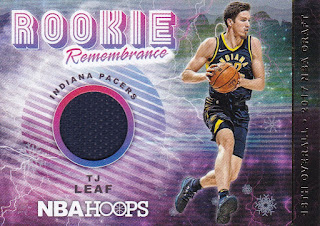