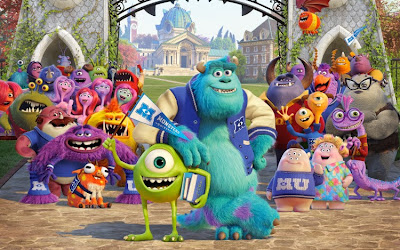 Monsters University was a movie I was really looking forward to seeing and as it was a Christmas present to the kids this week I was able to watch it this morning.

I wasn't disappointed.  No need to dissect this too much.  It is a very good prequel giving us the background on how Sully and Mike met in college.  Sully is the prototypical jock while Mike is the nerd.  Not exactly a surprise but I wouldn't expect anything less.

We see that Mike wanted nothing more in life than to be a "scarer" and headed to Monsters U. to fulfill that dream.  He is the guy who is the best book student on the subject while his practical skills are lacking.  At the school he meets Sully in class who thinks he can be the best scarer on his famous family name as well as pure talent.  Of course this puts them on different sides of the academic path.  Through circumstances they must then work together at the end to achieve their goal which is a pretty standard plot for these types of movies.

That doesn't matter as it is the journey you'll enjoy.  It is fun to see these guys in a school setting and meet new characters.  My favorite is the school dean.  I highly recommend this to everyone.  This is probably my favorite animation film/series at the moment.  I recommend everyone with kids to let them watch as kids will enjoy this one as much as the first even without the cute kid from the original film.  If you are an adult and have any interest in animated films you must also give it a look.  I do think you'll like it.  Enjoy!
Posted by Bulldog at 3:43 PM No comments:

Board Game Review: Apples to Apples 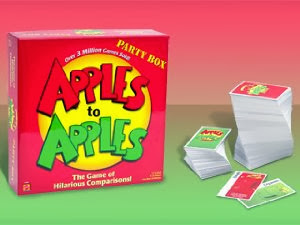 I won't do reviews of board games that often but I'm nothing if not random.  Every Christmas we get a new game for the kids and us to play.  This year was the game is Apples to Apples.  What has compelled me to write about this game is the simplicity and fun factor.

It is simple as in you can be playing it in a few minutes and never look back or continue to refer back to instructions.

The fun is in it's play.  The basics are their is one "judge" per round and pulls a green card which contains an adjective or descriptive phrase.  Everyone else has 7 red cards in their hand which contain a noun - person, place or thing.  The judge tells everyone the word.  Each player then puts a card down that will be read by the judge who will then decide which card goes best with the adjective or phrase.  The fun part is that the judge can use any criteria they want to make that decision.  So the players putting down their noun cards learn to do so depending on what they think the judge will pick.  This means it might be the most outrageous combination.  Maybe the adjective is cuddly and a player puts down the noun card Typhoid Mary.  Sometimes the best choice is completely appropriate - stuffy and republicans.  Again it just depends.  Whoever had the winning card for that round keeps the green card and the overall winner is whoever ends up with the number of green cards set as the target number needed to win.  That can be set as the game states or adjusted to work with the group playing.

If it at all sounds interesting pick it up.  We had a good mix of adults to kids (youngest 13) and it was great fun.  Again just a little Christmas randomness.  Enjoy!
Posted by Bulldog at 3:22 PM No comments:

Email ThisBlogThis!Share to TwitterShare to FacebookShare to Pinterest
Labels: Board Game; Apples to Apples; Review 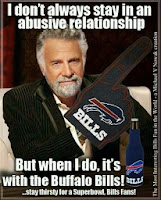 Buffalo is now 5-9 and have been out of contention since, well, when the season started.  I won't say it is a lost year but it has been a tough one.  I didn't even expect a .500 record but I had hopes of a few more positives.  They did beat Carolina and Baltimore within the first four games of the season to go 2-2 but it went down hill from there.  The offense is 24th in points scored while the defense is 18th in points allowed.  Nothing that will scare anyone else in the league.

Rookie EJ Manuel has started/played 10 games.  He has completed 58% of his passes but with only 11 touchdowns and 9 interceptions I'm not sure how good a season it has been.  I am glad to see more touchdowns than interceptions.  He is still young and very raw.  Hopefully he can develop into the franchise quarterback Buffalo hopes him to be.  Fred Jackson (725) and CJ Spiller (745) have split time at running back with both having over 700 yards going into the day. They are both averaging over 4 yards per carry (4.2 and 4.6).  So the running game is doing well.  I prefer having the one go to guy but I'm alright with this especially as they are both playing well.  Just wish we were seeing more scoring results from their productivity but that isn't their fault.  WR Steve Johnson and TE Scott Chandler are once again the big targets for the quarterback. Their stats aren't anything to look at but with Manuel's down year it is understandable.  Buffalo is still lacking that big #2 guy opposite Smith.  Rookie Robert Woods seems like he might be able to be that guy but there are no guarantees.

The defense is playing better with Mario Williams, Jerry Hughes and Kyle Williams leading a rush that has 49 sacks.  Buffalo is also +1 in the giveaway/takeaway category.  The defensive backs are still not great but the defense has played ok.  The season can't be judged yet.  With a new coach and quarterback we won't really know if this was a building year or not until two years down the road.  I have hope.  I still think the defense needs some upgrades, as does the offensive line and receiving corps. 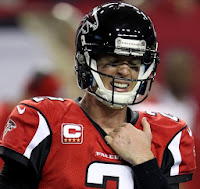 Atlanta, at 4-10, are in a worse situation after being one play from the Super Bowl last year.  Injuries have been a huge part of it.  Julio Jones (WR) and Sam Baker (OL) were big losses but other nagging injuries to Stephen Jackson (RB) and Roddy White (WR) among others just compounded the issues with the offense.  The article by Andy Benoit detailing some of the specific problems can be found here.  It is a month old but is still some great insight. While this season is lost the Falcons have next year to look forward to sans Tony Gonzalez.  That is no consolation right now when most everyone thought Atlanta would be right there in the hunt again this year.  My concerns are the fact that the defense is still very bad despite changes in the defensive backfield.  They don't get a good pass rush which puts too much pressure on everyone else on the defense.  Despite the lack of weapons Matt Ryan has also been part of the problem.  Seems like he could have made more plays at least in the games I was able to see.  Again may not have been his fault but thought he could have played better despite the issues.

NOTES:
I knew Vincent Jackson was good but has been a stud in Tampa Bay considering the lack of quarterback quality there.  He will likely set a career high in receptions this year.  I can only imagine how Phillip Rivers wished he was still in San Diego...It is time for Jason Garrett to go in Dallas.  Last week's killer loss to Green Bay due to poor play calling has to fall to him.  And it isn't like Dallas continues to underperform consistently. If he hadn't been Jerry Jones' personal hire he would have been gone some time ago....Patriots are a team hit hard with injuries but kudos to Billicek and Brady for keeping them in first place and in the hunt for the #1 seed.  It is a testament to both those guys....Detroit is another place where a change in coach is probably warranted.  Too much talent there on both sides of the ball for them not to be sitting on top of their division especially considering the injuries to the starting quarterbacks of Green Bay and Chicago....I like the way Philly is setup.  This team may not be in a championship game this year but Nick Foles looks like he could be the real deal.  Considering the talent already around him that is a very good thing for Philadelphia....Did not see Houston falling apart this year.  I've always been too high on that team but how the heck do they look so bad this year?

Posted by Bulldog at 1:46 PM No comments: