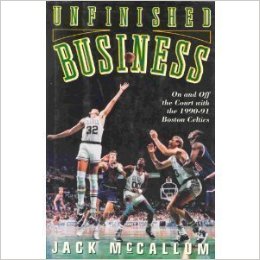 I finished Jack McCallum's book, Unfinished Business.  The book chronicles the 1990-1991 Boston Celtic Season.  During that time frame I wasn't a Celtics fan as they continually beat up on my Hawks. That said I did respect them and that respect has only grown throughout the years.  The Larry Bird, Kevin McHale, and Robert Parish era was truly a great time in Boston and the NBA for that matter.  The book provided me more insight into the players than I've ever gotten before.  During their playing days my only view of the players came from their games on cable or the NBA publications I subscribed to (Hoop Magazine & NBA Digest).  Local papers in small towns where I lived didn't carry much NBA coverage, if any.  So it wasn't until later in life that I learned how funny Kevin McHale is, how much of a loner Parish was, or that Larry Bird really was this big trash talker.  That is where these books are great.  You get that insight.  I wish I had read this book in 1992 when it was published.  It would have helped me to know who these greats of the NBA were while I could still see them live.

I've known this book was held in great regard among NBA books and it quickly moved to the top of my reading list when I found it for $5 at a collectibles show in October.  This was 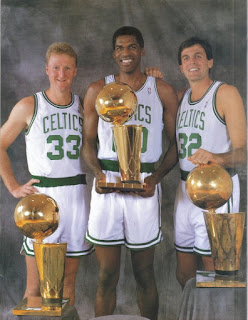 one of the last years of the Larry-Kevin-Robert trio.  In fact this would be Bird's next to last season in the NBA.  It details Chris Ford's first year as the Boston coach and an era of when the younger Celtics were looked to to make a contribution as that of Larry-Kevin-Robert declined.  Injuries played a big part of the big three's issues as well as age itself.  For his part, Parish actually stayed healthy in the regular season.  It was an unlikely season where Boston entered the playoffs as the #2 seed in the Eastern Conference after a year in which they started strong but injuries derailed the season.    In the playoffs they reached the second round only to lose to bitter rival Detroit.  Again injuries took their toll.  Back to the title of the book, these Celtics were so good that until injuries did them in, it looked like they were a true title contender.

While that is the framework of the book, the fun is in the details.  The behind the scenes stuff about the players, coaches and management.  McCallum does a good job giving each their space in the book and letting us get to know them while keeping a good pace.  Sometimes it is hard because I may have seen players in a different light in 1991-1992 even though I really didn't know much about them.  Again it is a good book, and a fun read and I expect anyone who likes the NBA should enjoy this book.

I'm not a Prizm or shiny card guy so please take this for what it is worth.  I grabbed a multi-pack pack of the 2015-2016 Panini Prizm basketball cards.  For $9.98 I got 15 cards including 3 red, white and blue parallels.  So the price point is the first thing I don't like.  That isn't much for what you pay.  Of course if I liked the cards more I'd probably be more on board.  I get it.

That said these aren't bad cards.  The photos are good and the front design pretty decent.  The back is also a plus for me. While you only get the standard Panini one year of stats, it is colorful and not hard to look at.  The pull itself wasn't great but livable.  It was my next to last pack before I really got a true star and that was when I pulled a Kevin Durant base card and a Russell Westbrook All-Star Game card.  So out of 15 cards that is ok.  I also pulled one rookie card (RC) and two throwbacks (Dennis Rodman and Dino Radja).  Dino Radja? He was a solid player who averaged 16 and 8 for his career but he seems a stretch for inclusion in this type of subset.

If you like the shiny Prizm type cards I think this will be something you'd like. For me I'll pass but I did want to give it a try and also try to be fair about it.

Posted by Bulldog at 2:30 PM No comments:

Basketball cards are always hit and miss at these shows.  St. Louis doesn't have a team and the sport definitely takes a back seat to Baseball and Football in the collecting world.  That said, I still managed to find some nice cards though not that many of my Hawks and Trail Blazers.  Enjoy.

Posted by Bulldog at 1:30 PM No comments: 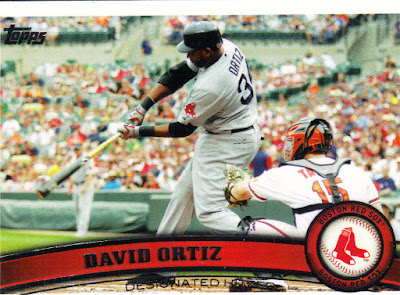 Last fall I attended another of the After the Game Inc. card shows in St. Louis. I love digging through the boxes of cards finding my favorite players or cards that interest me in general.  I'm an Atlanta Braves and Boston Red Sox fan and it shows in the cards I found.  In this post and a few follow up posts I'll show off some of my favorite finds from the show.

Picked up the 2015-2016 Panini Complete basketball cards.  This set is a low end alternative for card collectors and it shows.  The card stock is very thin.  That said this isn't a bad set.  I definitely prefer it over the Hoops cards from this year.  The design is pretty simple but I like the colored borders matching the team colors, nice team logo and name.  Simple and nice looking even if the player's position is missing.  The "Complete" product logo is also a little large but overall a nice card.  I pulled a Court Vision insert as well as a gold and a silver parallel card.  The silver parallel was OK but I didn't care for the gold one that much.  Silver parallels are one to each pack but the gold are one to every 36 packs so the gold parallel was a nice surprise.  I was happy with my pull as Stephen Curry, John Wall, Anthony Davis and LaMarcus Aldridge were among my cards.  I also had a few rookie cards. 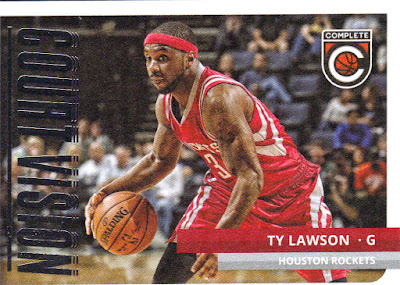 The backs weren't bad with a nice sized color team logo, player information, a write-up and stats from last year.  Considering how bland the Hoops' backs are these are great.  Ok maybe the color logo isn't that big a game changer but I still like the backs much better than what Hoops gives us.  If you are ok with a thin stocked card you should definitely check this set out.

Posted by Bulldog at 7:53 PM No comments: