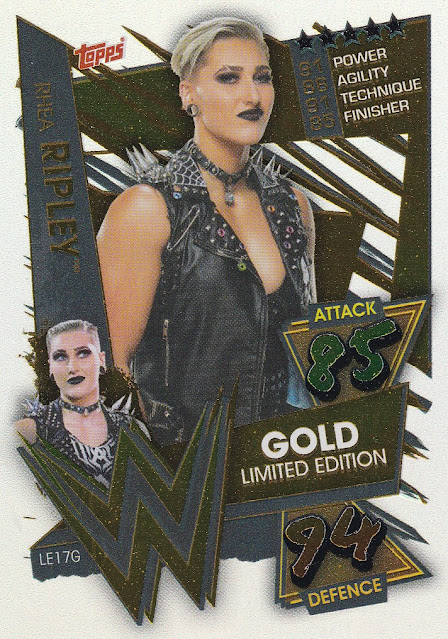 2021 WWE Slam Attax - I jumped onto Topps UK purely on impulse after seeing a few others posting some Slam Attax cards and these are just part of the order.  This Alexa Bliss Mega tin has 66 total cards including four limited edition gold cards.  Speaking of we'll kick this off with Australian Rhea Ripley who was the WWE Women's Champion for over three months earlier this year.

I like last year's design more but I still like the quirkiness of these.  Slam Attax is a game but I have no idea how it works and won't look into it.  I love WWE cards much more than I should.  I have no clear collecting plan for wrestling cards, outside of a few PC wrestlers, and now I have quite a few more to add to the pile.  I purchased the Alex Bliss tin specifically and pulled none of her cards.

Again more variety including cards of UK specific wrestlers.  I find it weird these are only on the Topps UK site.  Why don't they sell these stateside?  Shipping was about $17.50 for my total order and they took about six weeks to be delivered.  This tin was ~$18. 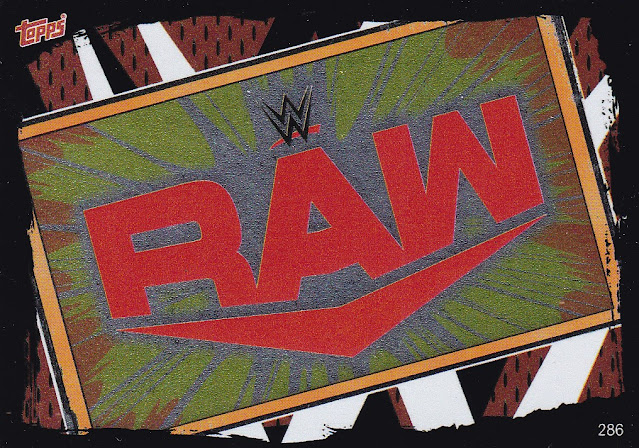 Again the variety is a big part of the appeal.

Some more "base" design cards. 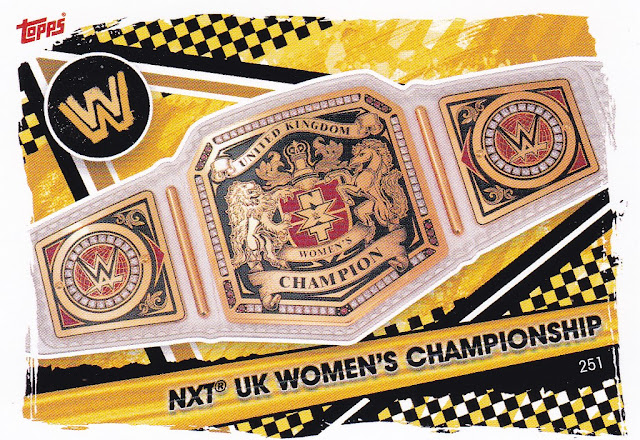 These cards are really fun.  We'll see where I go with it.  I'll show off more over time.  The tin, still in packaging, is below. 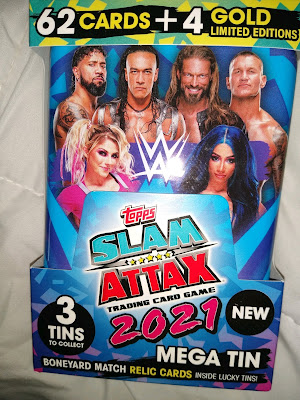 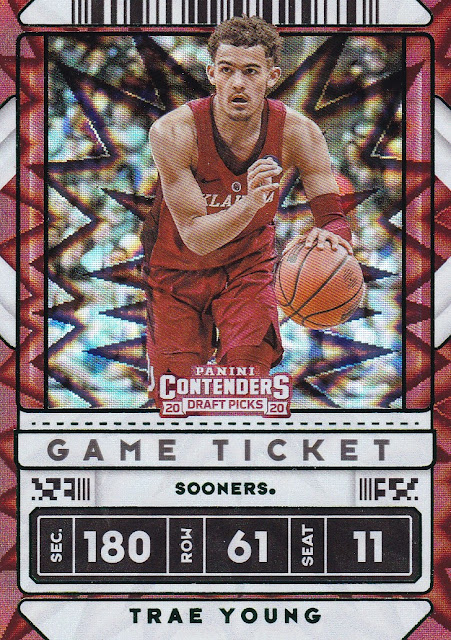 2020-2021 Contenders Draft Picks Basketball: Another pack from November.  Tonight is the draft where every team has hope they might find that next star to help put their team over the top.  Trae Young is that guy for the Atlanta Hawks.  Young, drafted by Dallas, was traded to the Hawks who originally drafted Doncic.  The Hawks used the Mavs' first round pick they received to draft Cam Reddish (still a work in progress).

Definitely good pulls in these packs.  The set size isn't that large with 50 base cards, each having a photo variation.

Mascots also get some love in this set.  Again plenty of stars to be had in these packs.  Fun pack and here's to hoping everyone's team finds "that guy" in tonight's draft. 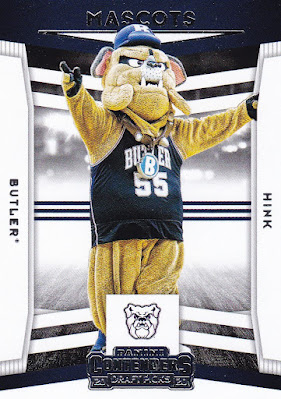 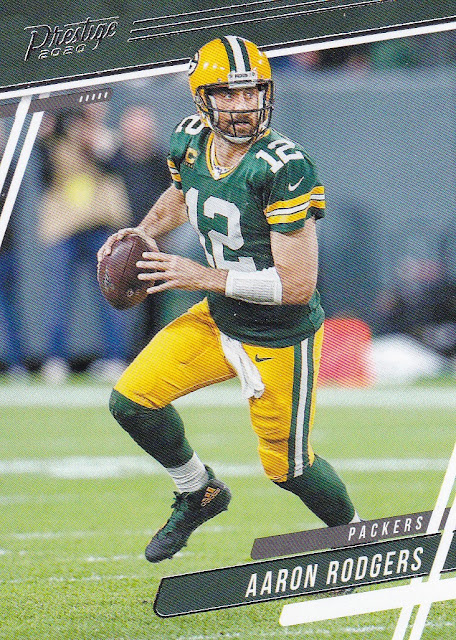 2020 Prestige Football:  This pack has been hanging around since August but with the Packers' training camp starting up today it seems very appropriate.  Will A-A-Ron be there?  I have to think he will be but it is the biggest question still lingering out there.  And if he is there how awkward is it?

Some solid base card pulls.

Great move by Tristan Wirfs as he got a Super Ring as a member of the Bucs last season.

Any Gardner Minshew card needs to showcase his mustache and hair.  Just saying.  Love the Old School inserts and this Ozzie Newsome in particular. 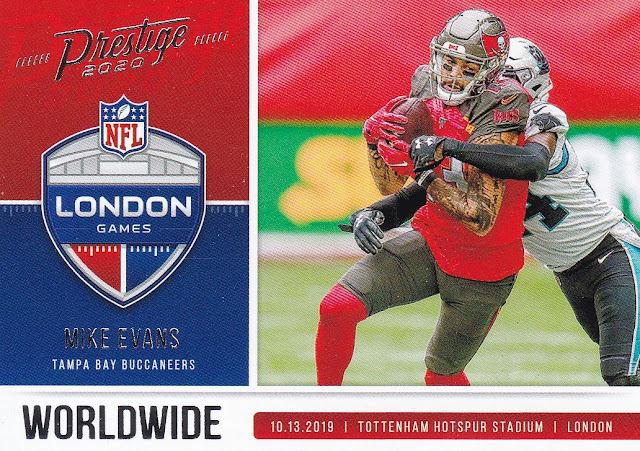 These Worldwide cards don't do a lot for me but I really like the Power House inserts.  Fun pack! 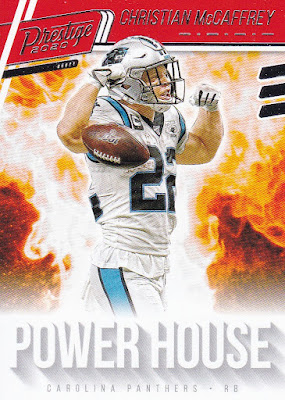 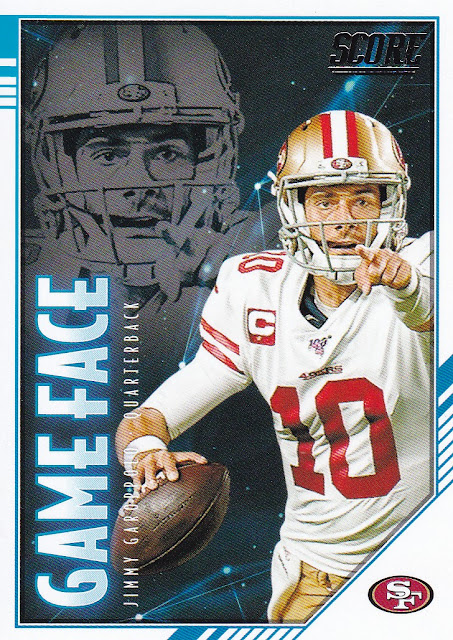 2020 Score Football: The NBA season is over and NFL training camps are getting started.  This pack has been around for over a year now.  Garoppolo is looking for a healthy bounce back year.  It makes sense that he will be out after this year after the Niners drafted Trey Lance with the #3 pick.

So bummed to see Julio Jones traded by the Falcons but I get why they did it.  Team was hamstrung by the salary cap and someone had to go.  It was their own doing and doesn't make them better in the short term though. 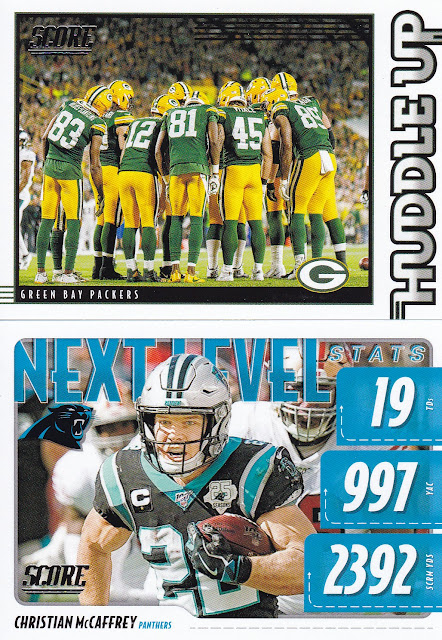 Will we see Aaron Rogers in the huddle this year?  Huge question that still needs to be answered.  Can't wait to see McCaffrey back this year after an injury filled 2020.

In the Zone is just odd.  Not sure if the pink is supposed to signify some "Zone" or what. 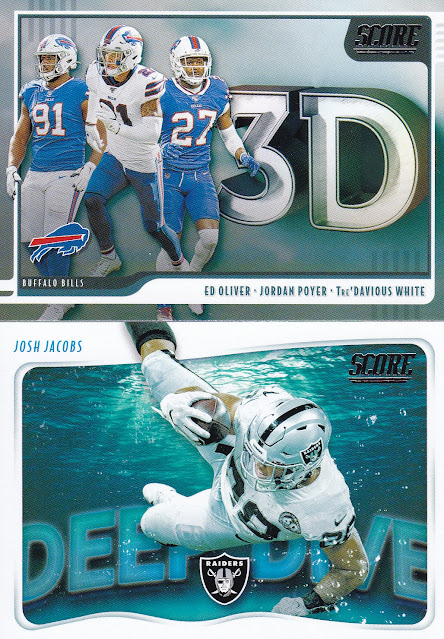 Deep Dive is another insert I don't really care for while I do like 3D.  The 2021 are a bit more fun with retired greats included.

Trubisky is a backup for the Bills this year.  Always good to have a veteran guy ready to go if need be.

While Shea Patterson didn't live up to expectations it is still a good excuse to show off those great blue and Maize unis.  Not a spectacular pack but still fun. 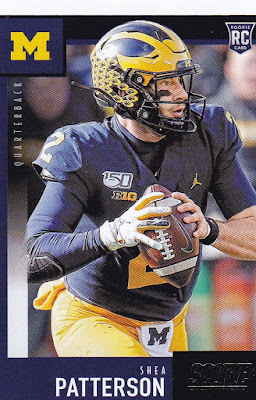 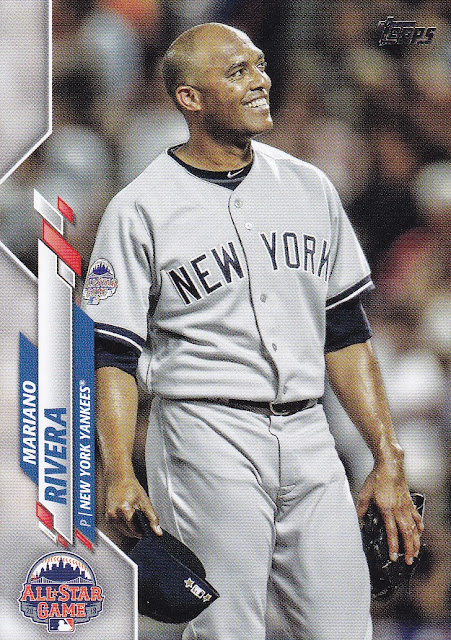 2020 Topps Update: I really like how Topps pivoted last year when there was no All-Star game and used photos from past events for their Update series.  It was great! We'll kick this one of with the closer GOAT who you can never go wrong with.

Plenty of All-Star Game and Home Run Derby cards which I enjoy.

I'll be happy when Rendon comes off the disabled list.  One he is too good not to have playing and two my fantasy team needs him in the lineup.  ;) 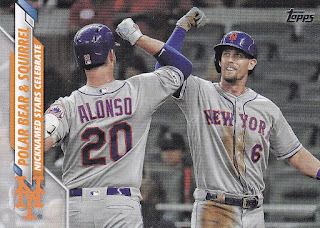 Those '85 Topps inserts are just too cool.  Speaking of cool...Joe Kelly and those cool specs. 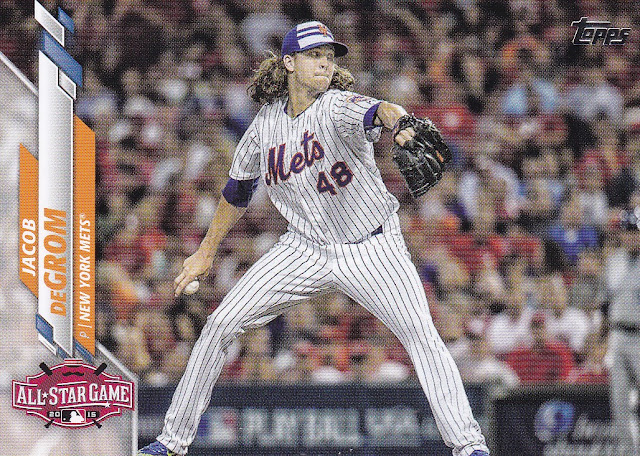 This guy is also on the IL but is having an amazing age 33 year with a 1.08 ERA.  Kyle Lewis is off to a slow start but I still hope he can reach the lofty expectations some day.  Fun pack of cards. 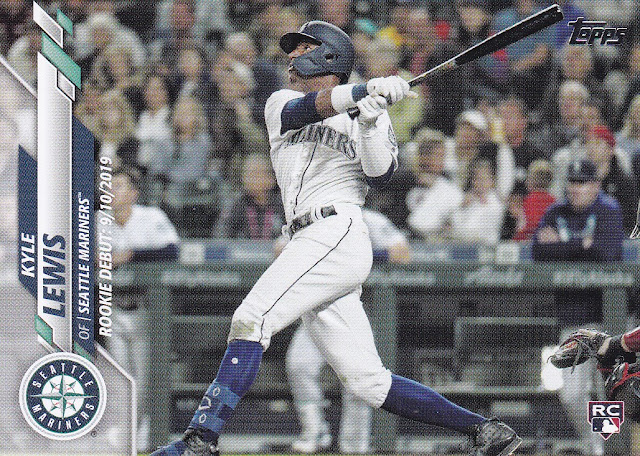 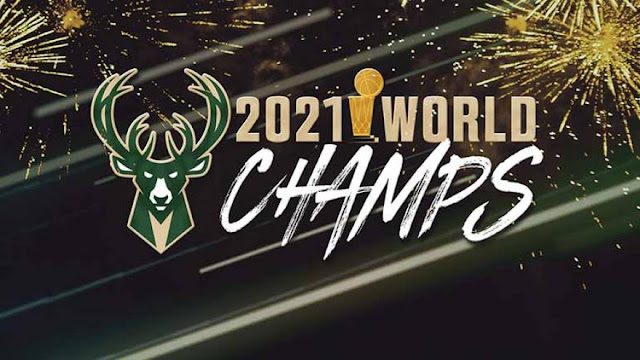 The Milwaukee Bucks came back from a 2-0 deficit to win the NBA Championship 4-2.  I was rooting for the Bucks which makes this all the more fun for me.  The Bucks had to wait 50 years between championships.  That's a crazy long time for any fan base.  That said Phoenix goes home having still never won it all.  I do feel for them.  They have great fans and such good players who were equally deserved.

But Giannis wasn't going to be denied.  This was definitely a team effort but enough can't be said about what he did in the series.  He was incredible.  If he doesn't go 17-19 at the free throw line in game 6 that game has a completely different feel, and maybe outcome.  I'm happy for him, Middleton, Lopez and all the Bucks.  When Giannis signed long term with Milwaukee it was a win for small market teams and it was hard not root for these guys.  Fun series to watch. 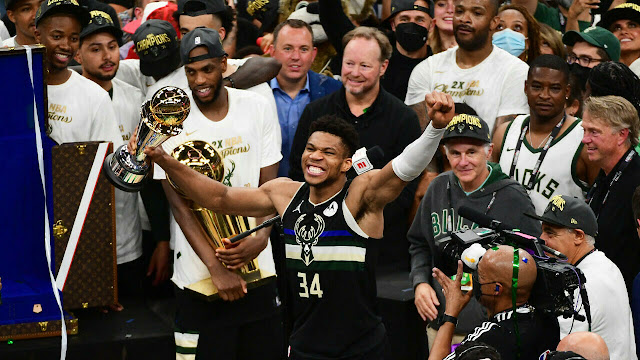 Fun post series note: Devin Booker, Kris Middleton and Jrue Holiday flew together to Japan to join Team USA.  I know there was probably some awkwardness to it but I hope in the moment of just them they could all enjoy themselves. 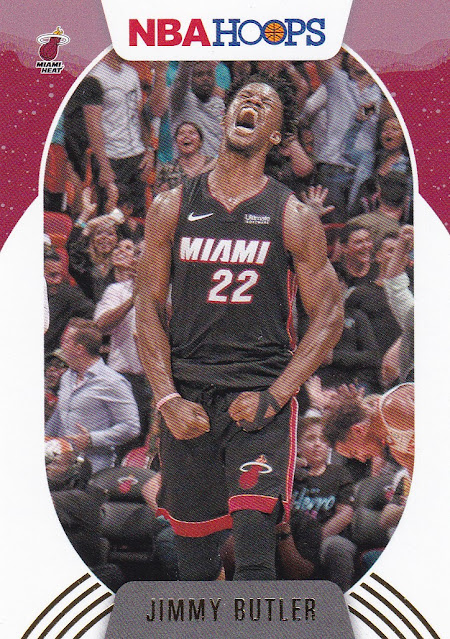 2020-2021 Hoops:  Hoping Milwaukee can close things out tonight but in no way am I counting the Suns out of this thing.  Back in March it felt like I hit the lottery when I found these on the shelves.  At the time of my first post I didn't even know I had the winter Hoops cards...heck I didn't even know there was a winter version.  Love this Jimmy Butler photo.

Great pull here.  Was really excited to grab a Lillard.  That Harden photo is pretty cool too.

My rookie pull was headlined by LeMelo who won Rookie of the Year for his fine season.  I thought Anthony Edwards might sneak in and pull it off but it wasn't to be.  Williams had a good year for the Bulls and Haliburton looks to be an up and comer after a really nice year with the Kings. 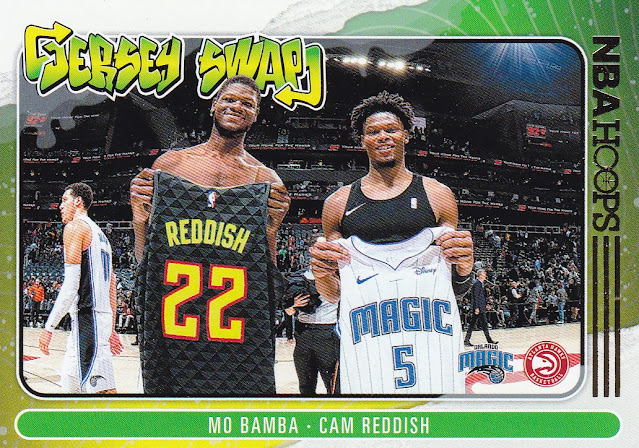 I think these are pretty cool inserts.  We don't see it on the court all the time but these guys have lots of love for each other and at the end of the day most are big fans of the game just like us. 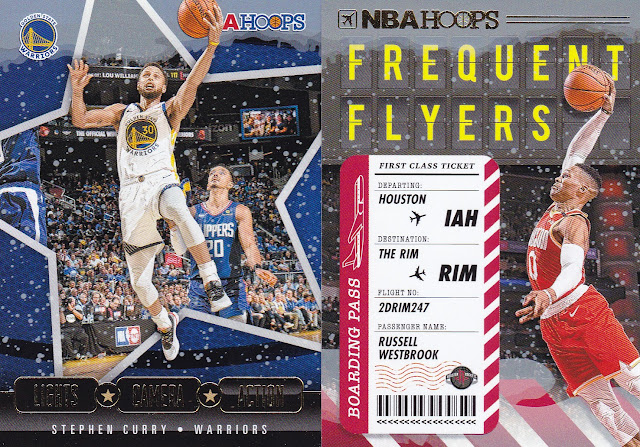 Lights Camera Action is a favorite insert from the set. 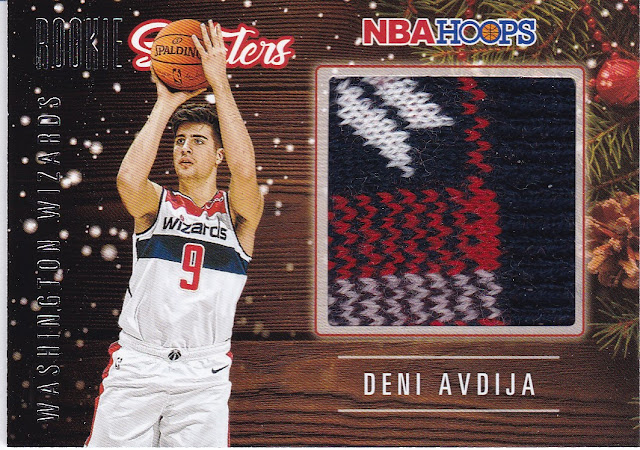 Rookie Sweater Relics and autos are possible in the blasters and I pulled this relic.  Avdija averaged six points and 4 boards a game in his rookie season.

It's great to see Khris Middleton get some props during the Finals.  He really is a good second to Giannis.  He can handle the ball and has a sweet shot. 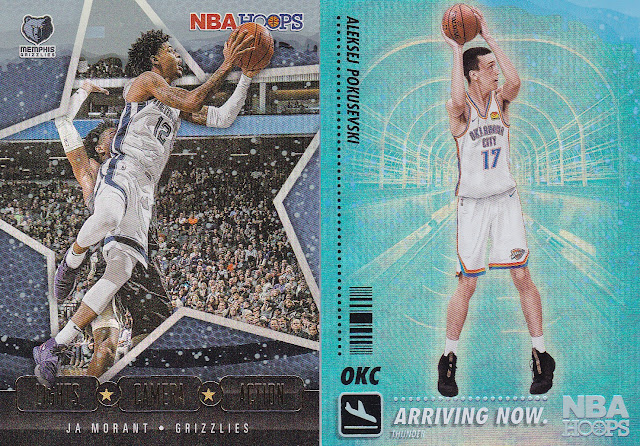 Ja Morant had a good second season in the NBA.  I'm sure everyone would like to see him get better shooting the three but he's still a star on the rise. 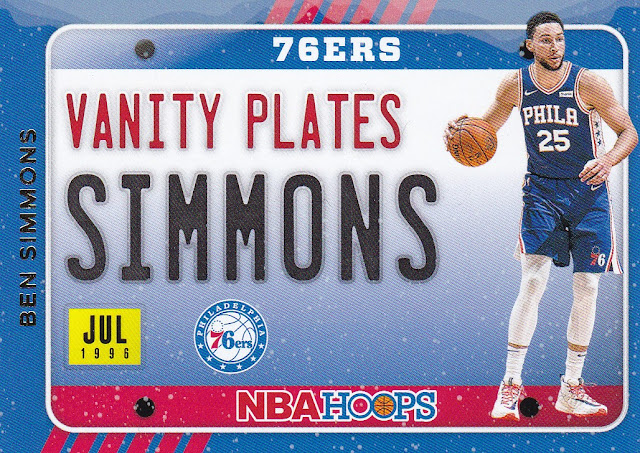 Simmons may have to get new plates if he is traded this offseason though his shooting woes and salary will make him tough to move.  Love these Slam inserts.  I'm really wanting to collect the set but the current prices make that a tough road to hoe.  We'll see.  This was a fun box.  Go Bucks! 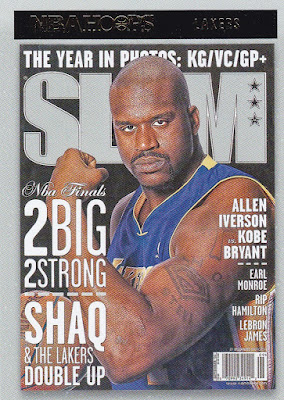 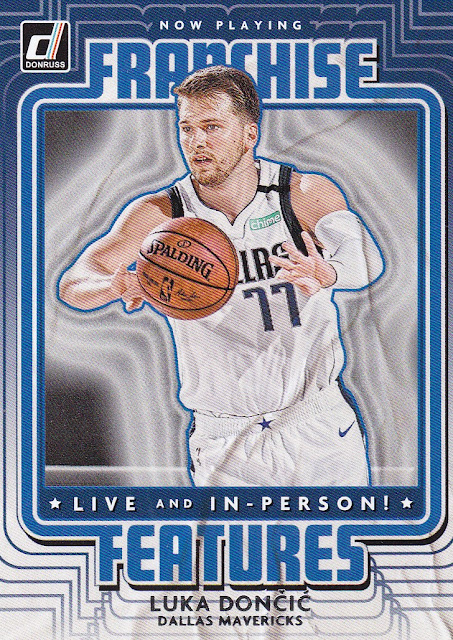 2020-2021 Donruss Basketball: Make sure your tuned into Affordable Group Breaks on Facebook and his blog Cardboard Collections. Game 5 tonight...go Bucks!  I ended up with multiple teams, some of which were discounted.  I grabbed the Hawks, Mavs, Clips, Nuggets, Bulls and Magic, Nets and Pacers.  We'll kick it off with this guy.  I pulled three of his cards which is never a bad thing.

Great photo on that Doncic card.  The design isn't bad.  Won't knock your socks off but I won't complain. 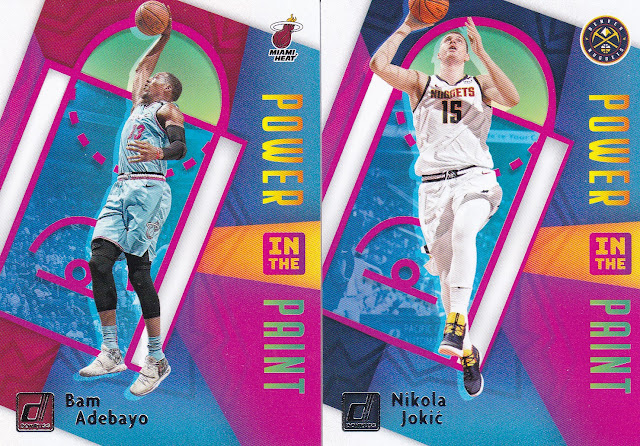 I liked these inserts.  The 80s Miami Vice vibe works for me and some pretty good players help.

That's a Green and Yellow Laser parallel.  They aren't numbered.  The backs are blah but that is to be expected with Donruss.

Added Gordon and Sabonis to the PC.  Didn't grab Sabonis' base card though. 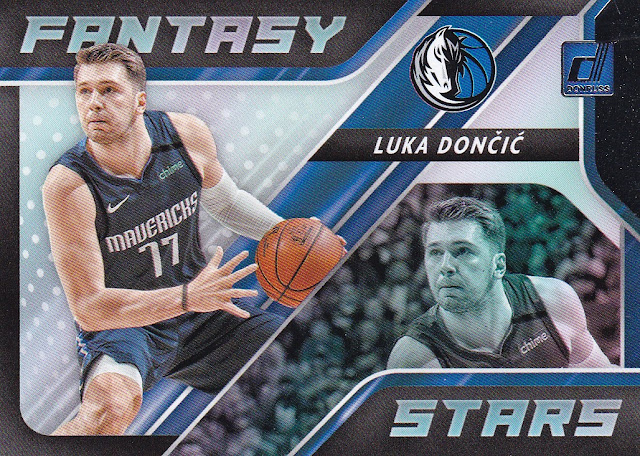 Fun bunch of cards and plenty of guys I can add to the collection.  As I will never see these in the wild I was really happy to see these come up on Affordable Breaks.  Plenty of great deals across the sports there.  He's on a bit of a break as he is in the process of moving but make sure you keep checking in. 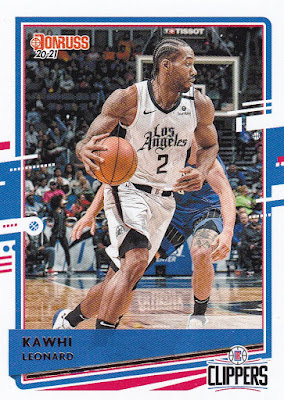