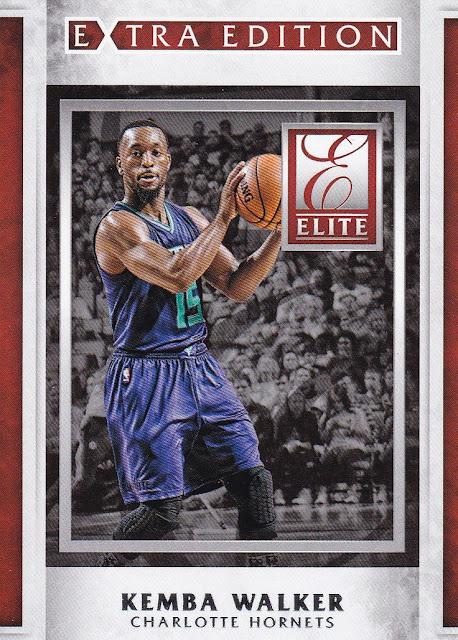 The NBA's silly season starts tonight so now is a good time to look at a pack of 2015-2016 Donruss Basketball.  I opened up a retail box of these in the past and I do like the design and photos.  That break can be seen here.  As excited I am for the NBA's free agency to start tonight this pack, outside of this cool Kemba Walker card and a few stars, it was somewhat boring.

Maybe I should be more excited about Paul Pierce, Kevin Love, and Chris Paul.  All great players for sure and maybe I'm just too excited about possibly getting Curry, Lillard, Durant, Leonard, AD or James.

The young players really didn't pan out over the last 4 years.  Rakeem Christmas does have one of the coolest names of all-time.

And the rest of the highlights...  This won't deter me from being exciting about seeing a historically great free agent class make their moves over the next week.  I'm all about players staying with their teams for an entire career but that isn't the world we live in.  Many of the moves are pretty much a done deal or somewhat expected but I'm hoping for a few surprises that'll make us go wow. 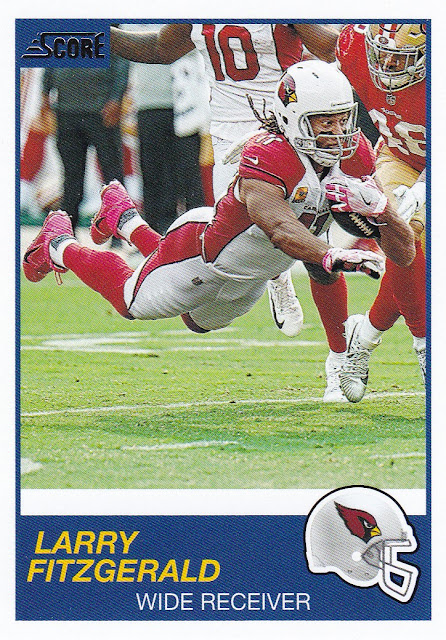 I really like the 2019 Score football so it's no surprise I'd bust another pack.  The throwback design has me hooked and Score always has a nice array of inserts.

Much of the star power of this pack came in the insert, not that that is a bad thing.

That picture of Alejandro Villanueva is great.  Football doesn't lend itself to cool non-action photos like we see in baseball so something out of the norm like this is fun to see.

That shiny Signal-Callers card did not scan well.  It looks much better in hand.  I do like the Huddle Up cards for some reason. 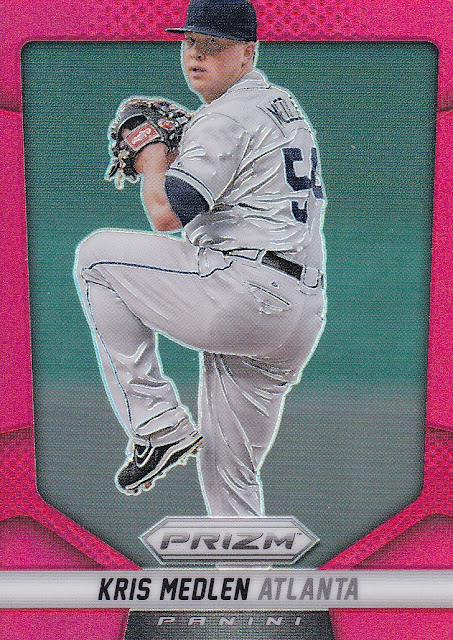 Mystery mail arrived yesterday in the form of this 2014 Prizm baseball card of Kris Medlen.  First and foremost thank you to whoever sent this great card.  Second I apologize for not knowing who sent it.  The town it came from does not match an address of bloggers I've exchanged cards with.  I'm hoping the "guilty" party will reveal themselves to me.  This Medlen card is a Red Prizms #25.  Bonus it is actuallynumbered #1/25.  Too cool. 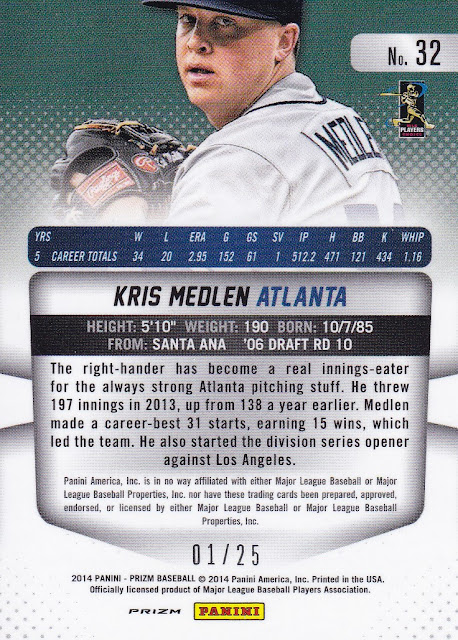 Medlen was a very good pitcher for Atlanta and was sorry to see him leave after 2013 but injuries cut his career with the Braves short.  He signed with the Royals and helped that team win a World Series in 2015.  Injuries again affected him and played his last season with the D-Backs in 2018.  Love this card.  Again he played very well for Atlanta, the surprise mail day is great, and love this card. 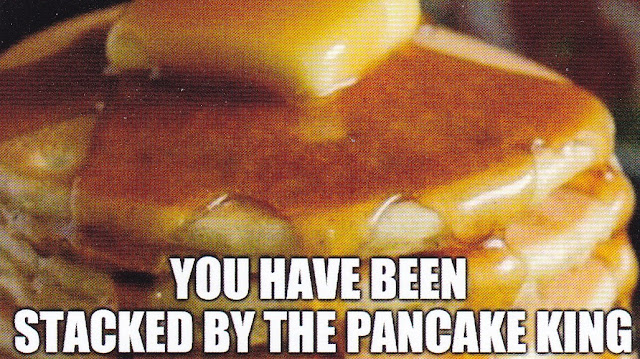 This card was the only other thing in the envelope.  Not sure if it was for fun or as a clue but I like it.  Thanks again to my mystery mailer.  You made my day.
Posted by Bulldog at 6:25 PM 2 comments: 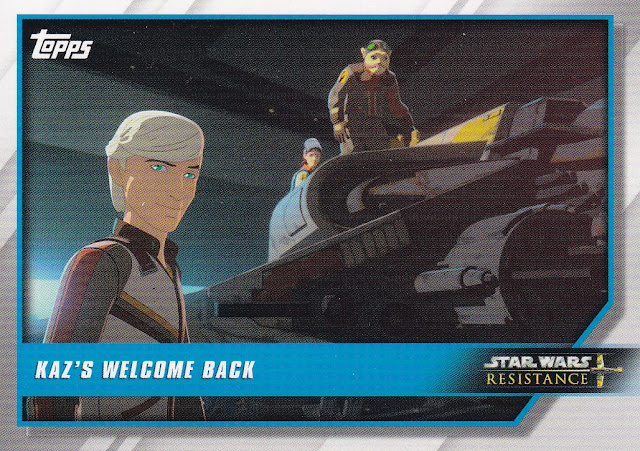 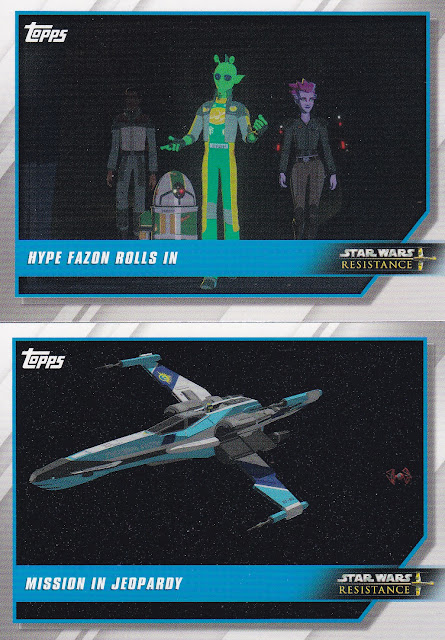 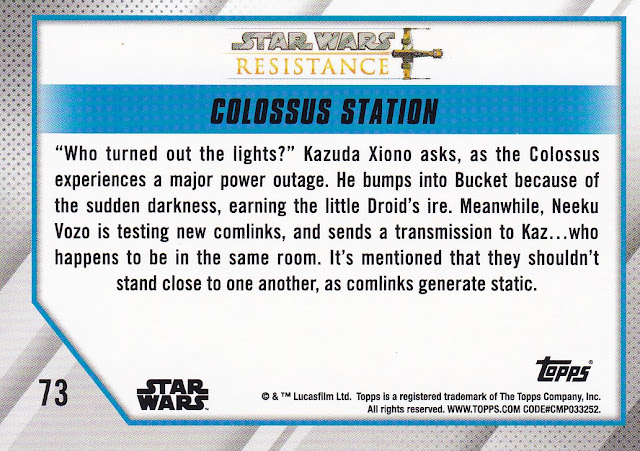 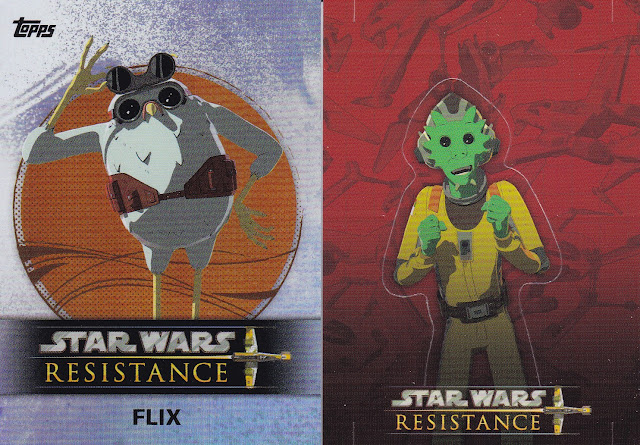 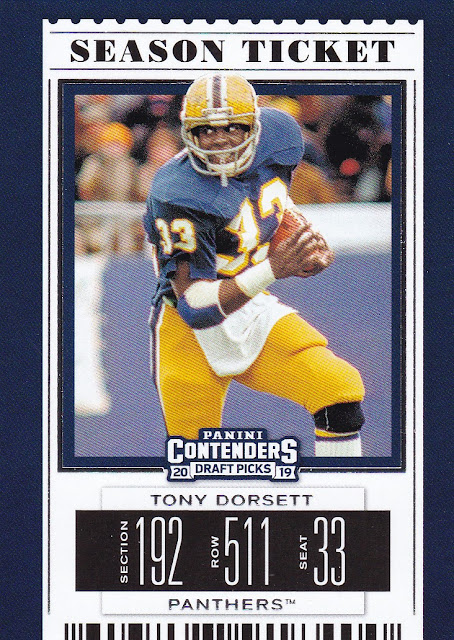 I'm a big fan of the Contenders brand so finding this 2019 Panini Contenders Draft Picks Football blaster was a fun surprise.  I'm good with the overall look of these but no matter how clear the player's names are on the scans that is not how they appear in person.  They are so small and being foil they are near impossible to read.  The team name is the same.  Still I like the college unis on current and past greats.  That's definitely a big draw for me.  These blasters come with two autos with mine being later round picks in the draft.  I never complain.  You don't know how players will do in the future and for me it is just pretty cool.  Mine were D'Andre Walker (Michigan) and Christian Miller (Alabama) and are shown farther down below.  I got a Wolverine which is a first for me.

I probably like the retired greats' cards more than anything.  So fun seeing these guys in their college unis.

Doesn't mean I don't like seeing current stars in their college attire.  We get so used to seeing them in their NFL uniforms and this gives us a different look at the player and a look at some of those cool unis.

The backs are colorful with typical information and write-ups which are fine with me.  I like the backs due to the nice color and team logo.  Font size is small but I always say that.  Inserts aren't bad but not overly exciting.  I do like seeing the full photos on the Game Day Ticket inserts.

The section number is the player's weight, the row is his height (61 = 6 feet 1 inch) and the seat is their jersey number.

Overall a fun box.  With two autos per box the price tag doesn't seem so tough.  The number of autographs in this set is quite large so getting a big name may be a chore but it is still fun chasing them.  Unless these just dry up it won't be my last look at these cards. 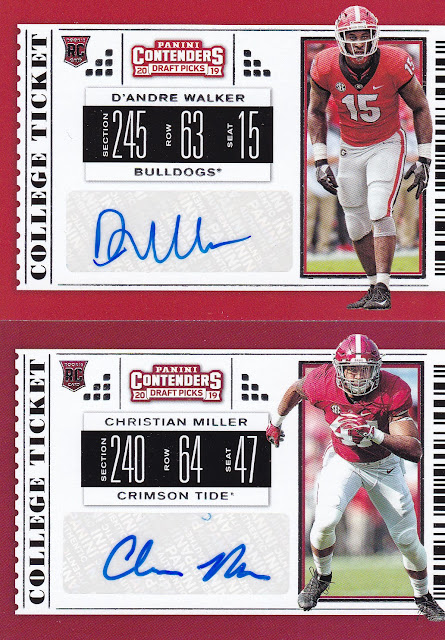 Nice looking autograph cards.  Not on card autos but I do like the card as a whole. 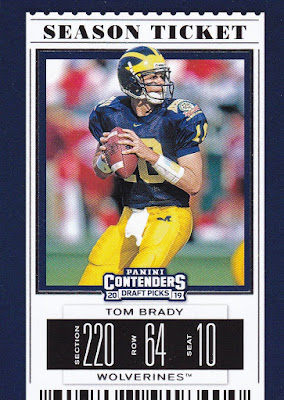 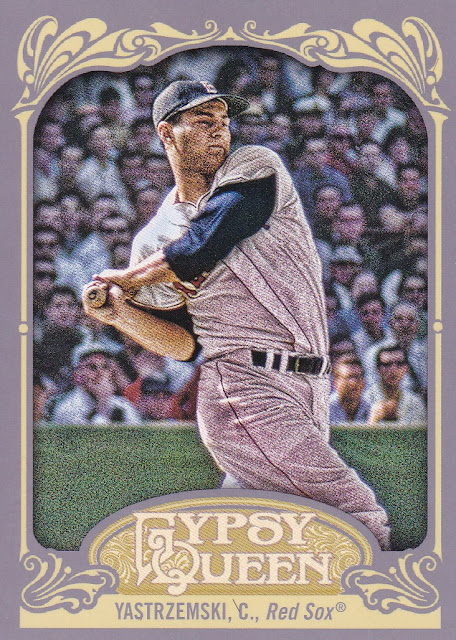 Today I'll look at the baseball cards I received in the trade with Greg over at The Collective Mind blog.  Again I really think I got the better end of the deal.  I received a ton of great Braves and Red Sox cards and many were Gypsy Queen and Allen & Ginter which is not something I really have a lot of.  I like both sets but unless I see singles at shows the best I can do is a pack of each when they come out so the volume of these cards spanning different years/sets was awesome.

And oh the memories.  These are too cool.

Rice and Yaz are both top 3 all-time players for me and it is great seeing some of the legends from the early years of baseball on cards like Tris Speaker here.

These Pacific cards were always cards I liked for some reason.  They look even better with Braves and Red Sox greats on them.

I'd never seen this set so it was fun to see these cards.  I definitely want to look for more singles from the set.

I also received plenty of personal collection guys in addition to Braves and Red Sox.

I can cross these off my lists.  Love these retired legends and current PC guys in these Gypsy Queen sets.  That Buckner card really is awesome. 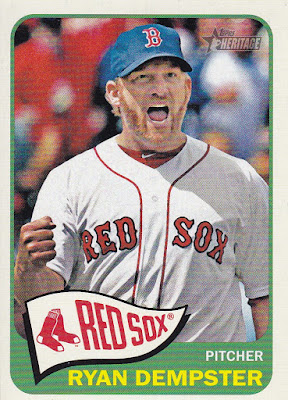 Thanks again to Greg for all the cards.  I've had so much fun looking through them all.  I thought this Dempster card has a really good looking photo and really captured my emotions for this trade.
Posted by Bulldog at 3:33 AM 6 comments: 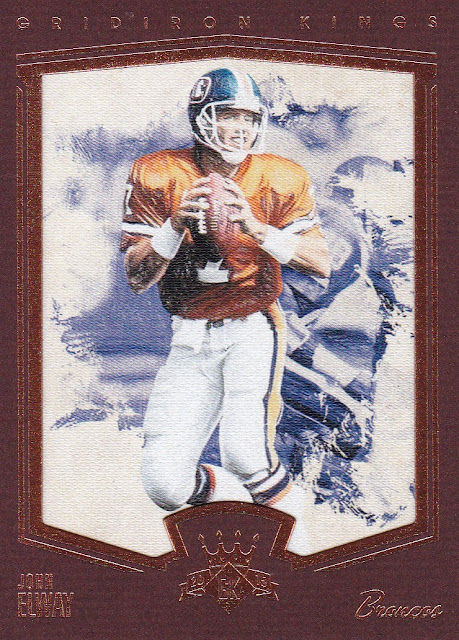 I did a trade with Greg over at The Collective Mind and I use that term loosely because he overwhelmed me with such great cards that included football and baseball.  Today I'll show off some of the football cards which number approximately 172.  Greg did such a good job sending plenty of my Bills and Falcons as well as many PC guys across all different eras and so many different sets. This was truly a fun mail day.  Thanks Greg!

Greg took the time to send PC guys.  I know grabbing individual players can be time consuming and I do appreciate his doing that.

More than a few 1984 cards were in this package and man was I happy to see them.  This is my favorite football set of all-time and just love these cards.

I did not have any football cards that go back to the early 70's - I do now!  Plenty of cool cards and these are so fun to add to the collection.

There are so many Falcons and Bills cards that I didn't have.  Oh the memories these cards conjur up.

Again this is just a small portion of the football cards.  I'll do another post in the next couple days to showcase the baseball cards I received.  Again thanks Greg! 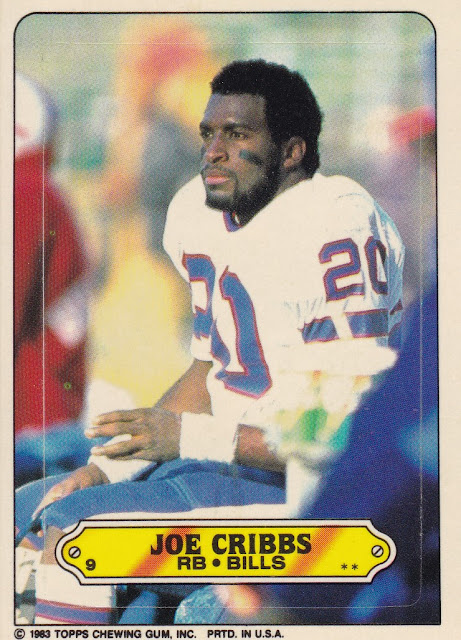 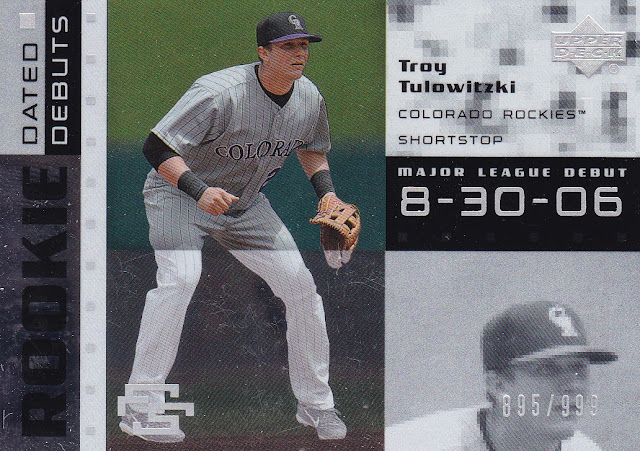 Rod also sent along three wax packs which are always fun to open.  Pedro was the big hit here in one of his first cards.  Again this is a small sampling of Rod's generosity.  Thank you Rod - I love the cards.
Posted by Bulldog at 1:25 PM 6 comments: