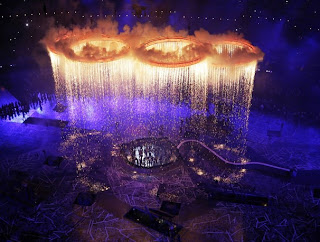 The 2012 Olympics kicked off last night in London with the opening ceremonies.  I watched the ceremonies.  I'll say it was different and seemed a little long winded.  I'm not faulting the organizers as you don't get many opportunities to host the Olympics.  Still I'm glad there were commentators to help explain what was going on or I would have been lost.  That said I did like the Queen's entrance with James Bond himself as they "parachuted" from the helicopter to enter the stadium.  Nice bit.  My favorite is always the athletes parading into the stadium.  The ending as seen in the picture to the left was also pretty cool with the Olympic rings lifting into the air.  Nice way to end it.  Can't wait to see what Russia comes up with in 2016.

It is funny when the Olympics come around as conversations pop up as to why we care.  With all the distractions in the world nowadays the Olympics can seem somewhat dated to many.  I'm a little old school and still like the international challenge as the world's best go head to head for their country.  They may win titles throughout the years but in the Olympics you are directly representing your country in a venue second to none.  I also enjoy all the stories that are reported on.  With so many athletes from around the world there are plenty of fun and heart tugging stories to go around.  The underdogs also get to play on the big stage.  As the athletes marched into the stadium last night there were many times where I was saying "that's a country?".  You also have all the different sports that'll never see the light of day on cable TV otherwise.  Racewalking or trampoline anyone?  And they dropped baseball and softball?  Hmmm.  Sports come and go so even if I think they're goofy I'll watch just to say I did.

Again I enjoy the Olympics.  I like everything that surrounds it.  Nothing like seeing the excitement as athletes and teams win medals and the moment when they receive their medals is still special.  I better get going.  American Timmy Wang is down two sets to none to his North Korean ping pong opponent.  I'd better pay more attention...
Posted by Bulldog at 10:44 AM No comments: 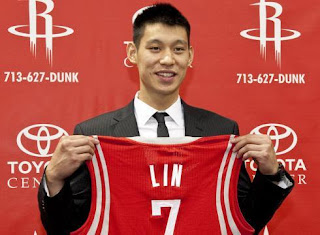 When the New York Knicks decided not to match the three year 25 million dollar contract offer by the Houston Rockets the Jeremy Lin show hit the road.  I must say this is a story that I tired on very quickly this past season.  Don't get me wrong.  I think it is interesting but I swear some folks thought the second coming of Jerry West had appeared in New York.

Lin did put up some good numbers but also turned the ball over at a rate of 3.6 a game.  Some of the game's great point guards have led the league in turnovers so this alone isn't enough to condemn him - NBA Turnover Leaders by Year .  His 14 points, 6 assists, and 44% shooting percentage should give any team hope that he might be a nice point guard.  But I'm not convinced.  He started only 25 games and when Carmelo Anthony returned from the disabled list the offense didn't click as well.  While many want to put the blame on Anthony I would have thought adding a good point guard with Anthony and Amare Stoudemire would have taken that team to the next level.  I'm not saying it was his fault.  Much of that blame should be leveled at the coach but why couldn't it work?  I hope he does do well but I'm always skeptical about a player who is the second coming after such a short period of excellent play.  I'd think he will make a good backup someday but I can't see him being much more than that.

Hopefully for Houston he'll be much better.  The money they are giving him and everything they are saying says they expect a starter and nothing less.  They of course are also buying "Linsanity" which will help bring press to the team.  An added bonus but only if he plays well.  Again I hope this works well for everyone.  Houston needs something as they rebuild for the future and continue their pursuit of Dwight Howard.  New York now moves forward with Raymond Felton at the point who should be solid but won't come with the hype which may be a plus in the long run.  No matter what happens I know I'll be stuck hearing about Jeremy Lin on the radio each morning for some time to come.
Posted by Bulldog at 10:36 AM No comments: 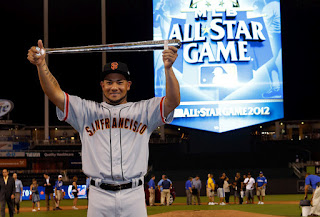 Was able to catch the baseball all-star game last week.  I think this is the the best of all the sports all-star games.  You still have great pitcher versus batter match ups.  At it's basic element it is pitcher versus batter.  We might even be talking about some of these in future as a "remember when..." conversation.  Maybe even Justin Verlander versus Joey Votto.  Yes Verlander had a bad game but again some day the conversation may lend itself to "I saw Verlander strike out Votto looking".

Even with the shutout the National League put on the American League I enjoyed the game.  Of course it being Chipper Jones' last game it was something special.  Can't say he will be one of the all-time great motivational speakers   - Chipper Jones Addresses NL Locker Room Prior to All-Star Game -  but it was still pretty special for me and I know it was for him - Chipper Jones 2012 All-Star Moments  Enough about Chipper.  San Francisco represented as Matt Cain, Melky Cabrera (MVP) and Pablo Sandoval all had a very good games.  I thought Rafael Furcal stood out with his great defense and added a hit.  Ryan Braun also had two hits and Craig Kimbrel fanned two facing only two batters.  Along with Aroldis Chapman, Wade Miley, Joel Hanrahan, and Jonathan Papelbon the National League relievers allowed only one hit cementing the shutout.

Nice to see Tony LaRussa get a win as he probably managed the last game of his career.  Pretty cool that he was able to manage the all-star game after retiring after the St. Louis Cardinals won the World Series last year.  Speaking of, I do still believe it is garbage that this game determines home field advantage in the World Series.  This is an exhibition game.  Do the Yankees want to count on a game that will have every all-star, including rookies, get to play or do the Nationals want home field advantage determined by rookie Bryce Harper's fielding blunder?  Oh wait, he plays for the Nationals...but you get the idea.  I do think players play hard but are these players all truly the best?  How many don't play due to "injuries" or pitch because a pitcher pitched two days before the all-star game?  Too many variables here to make this game determine home field advantage.  But at it's core it is a game I look forward to each year and do enjoy watching.
Posted by Bulldog at 7:35 PM No comments:

It is very common nowadays for a website to have a slideshow of this or that.  They are everywhere allowing us to see a group of pics that all relate to the subject of the show.  I think they are great...when they work.  My idea of a slideshow is the ability to click from one picture to another without actually going to a different page.  On many sites this is exactly how it works.  These are a couple of examples of when they work:

There are many others that basically just move you from one web page to the next web page with a different picture on each.  This may be me just being a whiner but in today's day and age there is no reason for this.  Slideshows should be smooth without that hiccup as a new picture loads.  Again this is probably the most petty thing I'll ever complain about but it seems these are seen on every site out there and I have no forgiveness for those who can't join the modern world.

Posted by Bulldog at 5:44 PM No comments: