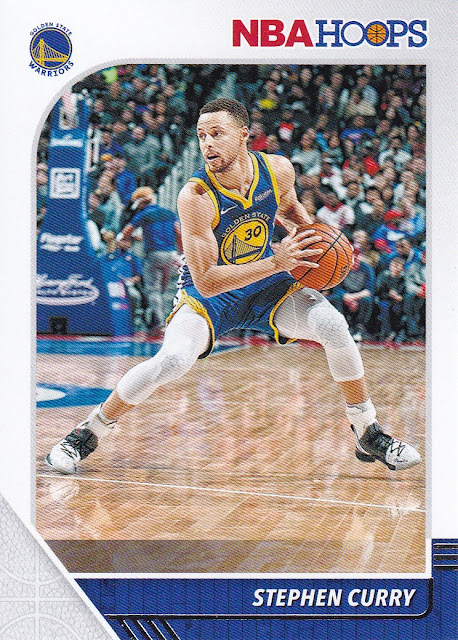 2019-2020 Hoops Basketball: Still working through packs bought quite some time ago.  This year's Hoops has been pretty good to me.  I've pulled a few Zions and an auto.  This pack had neither but still delivered very well with two personal favorites in Steph Curry and Damian Lillard and plenty of other stars.

Plenty of other stars in the pack as well.  I can't wait until these guys are all back on the court.  The season was so much fun before getting shut down.  Nikola Jokic has slimmed down during the downtime.  I can't wait to see what that translates to on the court.

With the shortened end to the season and going right into the playoffs there could definitely be some surprises in store.  Denver is already really good.  Could they upset one of the Los Angeles teams?  I don't think anyone really knows what is in store for the rest of the season.

More big names round out this pack.  Lots of fun and I'm looking forward to seeing all these guys on the court. 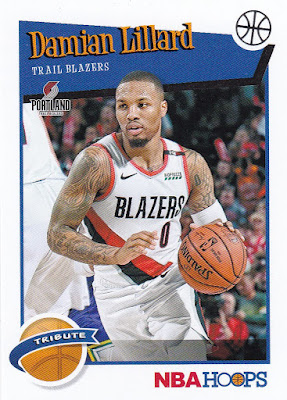 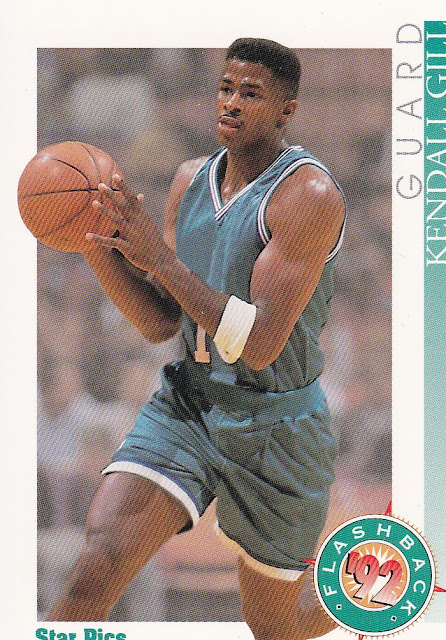 1992 Star Pics Basketball:  This was one of the packs that came with my Amazon purchase in May.  The set contains the majority of the players from the 1992 NBA Draft and totals 90 cards.  Kendall Gill was definitely highlight of the pack.  The jersey looks like an airbrushed Charlotte jersey so no NBA license here. With so many players drafted some names are familiar but many are not.

It's nice they had the college license so no airbrushing for this set.  I don't know anything about these guys.  I could google them but I'm not even sure it's worth it.  The fronts are somewhat bland thought not a bad design.  I think the pastel colors just don't do it for me.

I thought I'd heard Isaiah Morris...but I don't think so after looking him up.  One season with the Pistons averaging 2.2 points.  The write-ups on the back are actually good.  If you don't know anything about the player these are a quick easy primer.  Stats would have been nice.  I probably won't ever see these again but it was fun seeing a product that is new to me. 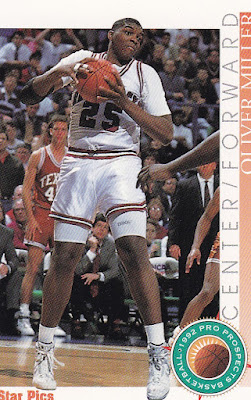 I know this guy!  Drafted in 1992 he played quite a while and was a part of that Charles Barkley led Phoenix Suns team that lost to the Bulls in the 1992-1993 NBA Finals. 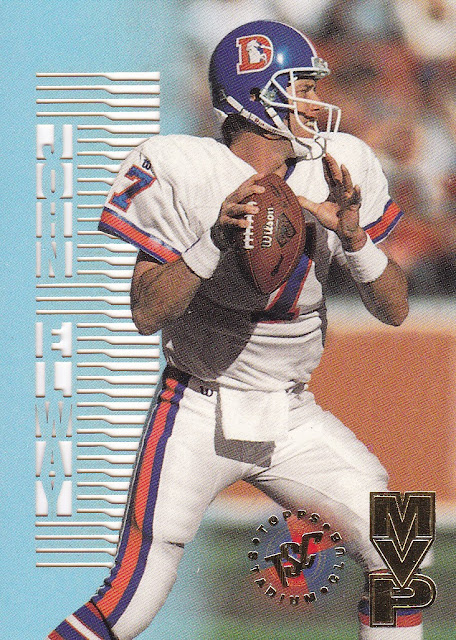 1995 Stadium Club Football:  Colbey over at the Cardboard Collections blog also runs the Affordable Breaks on Facebook.  If you aren't a part of these you are missing out.  He allows stacking (saving up cards from multiple breaks prior to shipping) which is a huge plus.  These came in a box with a bunch of baseball cards which I hope to share later in the week.  Bottom line is the cards are fun and prices are great.  I grabbed five teams in this one.  Falcons and Bills are my teams but the Chargers, Saints and Broncos allowed me to pick up some personal collection guys as well.  That includes this sweet John Elway MVP insert.  This is card is diecut.  That white to the left of Elway's photo is actually cut out.  Really cool card.

So many greats on those Buffalo Bills teams.   Didn't pull a Thurman Thomas but a quick look shows he wasn't in the set.  That's a head scratcher.

I always had a soft spot for Jeff George.  Such a great arm.  Such a head case.

Natrone Means was a beast who helped the Chargers to the 1994 Super Bowl before they lost to the 49ers.  He rushed for over 1300 yards that season.  A cool Junior Seau insert as well.

Jim Everett is another guy I always liked and collect.  That base card photo is a bit questionable and I'm not a fan of the gold numbers on the white jerseys.  I do like the jersey Quinn Early is wearing and Topps redeems themselves with the photo on Everett's Extreme insert.

Oddly enough I pulled two Elway inserts, which is awesome, but not his base card. 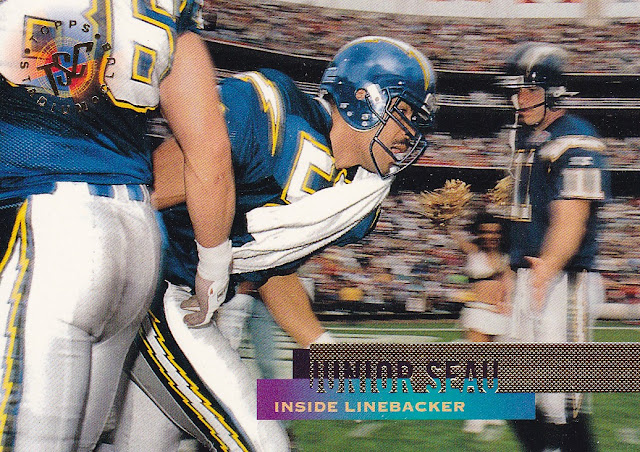 This is a pretty cool Junior Seau.  These are some cool cards and really happy with my pull.  Fun mail day. 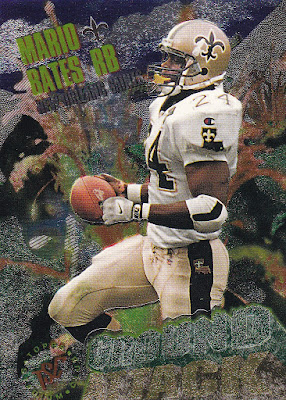 Mario Bates rushed for ~3,000 yard in his career and got himself a nice Ground Attack insert in this set. 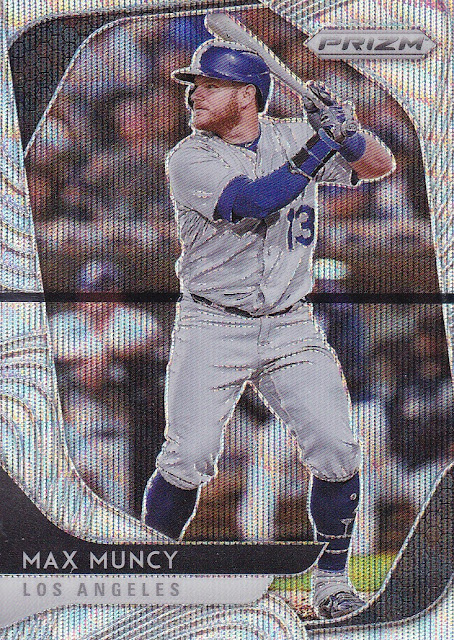 2020 Prizm Baseball:  Happy 4th of July!  And the 4th just screams baseball even if they aren't on the field.  I'm not a shiny card guy and the only baseball Prizm I've opened in the past was part of a mystery mail day and a repack.  This Max Muncy Blue Wave parallel, #/60, is a great place to start.  After being released by the Oakland A's he's hit 35 home runs in each of the past two seasons.  Crazy.  And no I don't see any blue in the card in hand either.

The design doesn't wow me.  The lack of team emblems is always a letdown.  The backs are better though I have to get the reading glasses out to even think about reading it.  This is listed as a multi-pack and that is because you have a regular pack and a pack with the Red, White and Blue parallels. 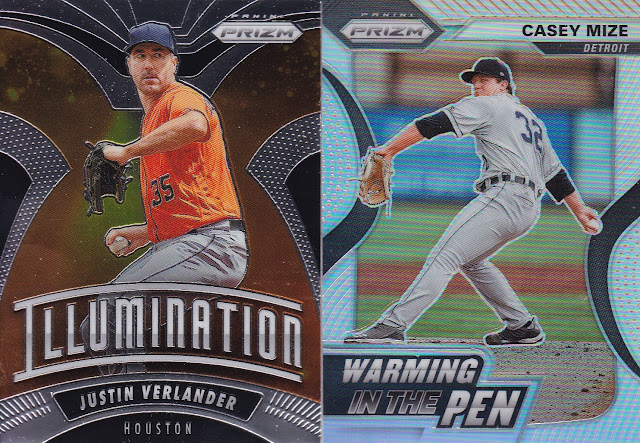 A couple of inserts here featuring pitchers.  The first with one of the best in the game while the second showcases a prospect.

The Red, White & Blue parallels are my favorites.  I like the color it brings to the card.  Only bummer was almost all the Red, White & Blue parallels were duplicates of cards I'd already received in the pack.  I won't pick more of these up but I know folks are big fans of Prizm, and it is one of the few new products on the shelves, so these won't be available for long. 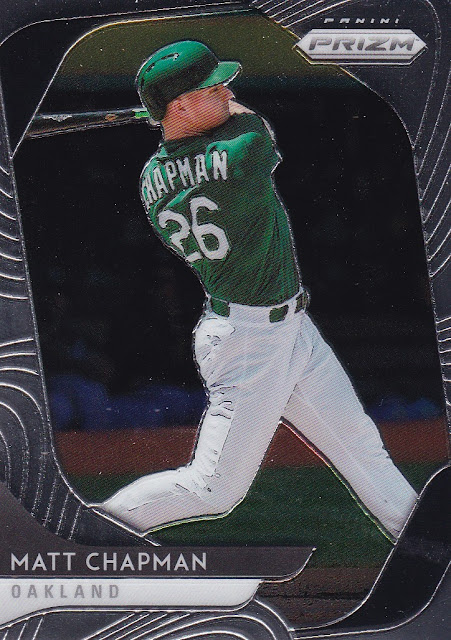 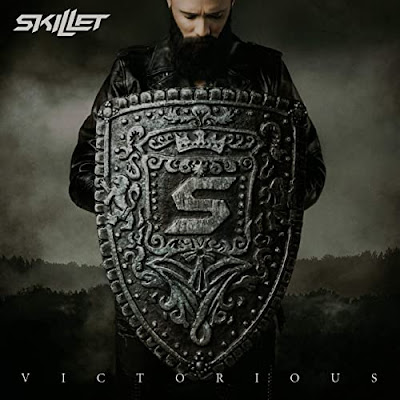 Skillet's Victorious CD was released in 2019.  Like it's predecessor it took time to grow on me but now I'm all in.  It's my go to for going on drives - windows down music up.  Like much of their music it has a driving undercurrent that just makes your head bob...or should I just say head bang.  From song #1 on this album, Legendary, there's some great hooks and beats throughout but Skillet stay true to their hard rock roots.  Legendary, Victorious, This is the Kingdom, Never Going Back, Finish Line,  Back to Life and the slower Terrify the Dark are my favorites but I don't click through any song on this album.  This record made it to #3 on the Rock and Hard Rock album charts.  You can hear samples of every song from the this album and all their albums here at Skillet's site.  I just wanted to share my thoughts.  This group is a good listen and great in concert.  Can't wait to see them live again.  Take a quick look at my previous posts on Skillet as well here. 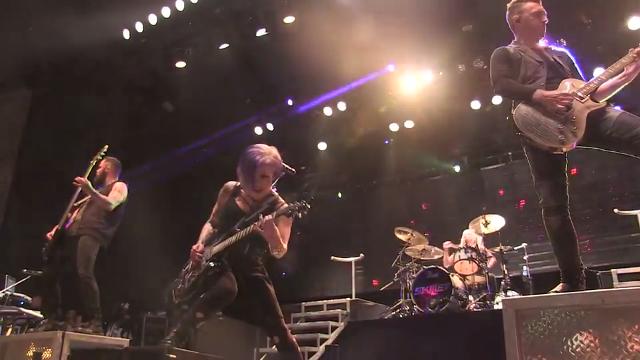 Posted by Bulldog at 3:33 PM No comments: 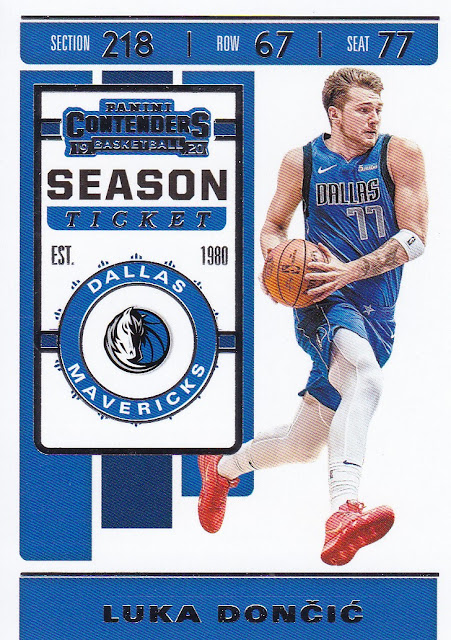 2019-2020 Contenders Basketball:  I'm a Contenders guy and I think this year's design is very solid.  I had a great pull with this pack which is always a bonus.  This guy has been great on the Mavericks and is no doubt the future of the franchise. He's so fun to watch.  Hard to believe the skills he has at  6-7 and he is only 20 years-old. 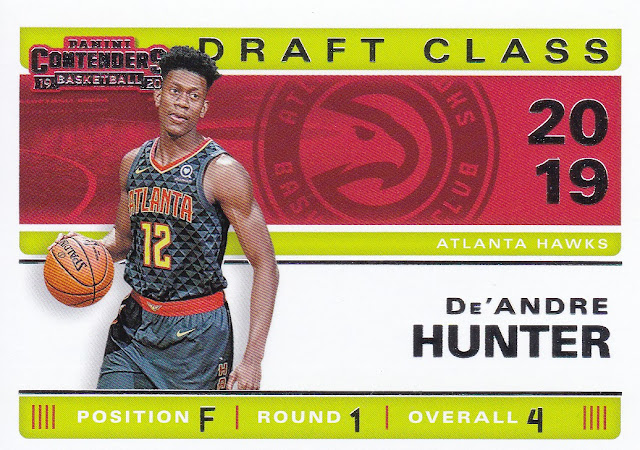 The inserts in this set are pretty good.  They don't bowl me over but I'm good with them.

I can't complain about this pack at all.  So many stars here and I pulled an Damion Lillard which, unsurprisingly, is my favorite in the pack. 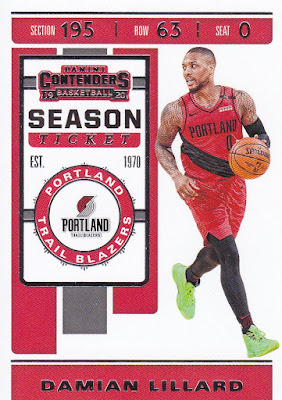 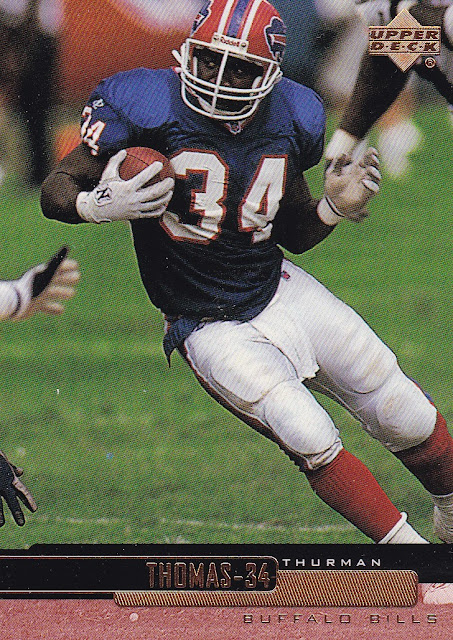 1999 Upper Deck Football: This was part of an eBay purchase that netted me some cool packs and cards I'd never seen before.  This set has a good design to it and nice photos.  Not a lot of wasted space either.  Love this card of Buffalo great Thurman Thomas and it's a fun start to the pack. 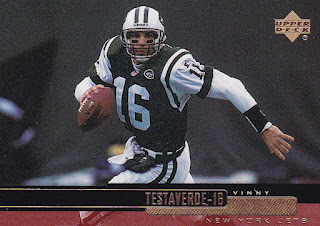 Vinny Testaverde had one great year with the Jets which happened to be 1998 when he went 12-1 as a starter.  NY made it to the Conference Championship but lost to the eventual Super Bowl Champion Denver Broncos and John Elway. 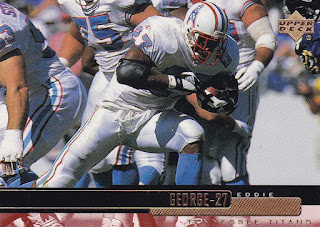 Eddie George started 16 games in eight of the nine seasons he played.  And after only nine seasons he is 16th on the all-time rushing attempts list.  '98 was the last season Tennessee played as the Oilers hence the jerseys on their photos. 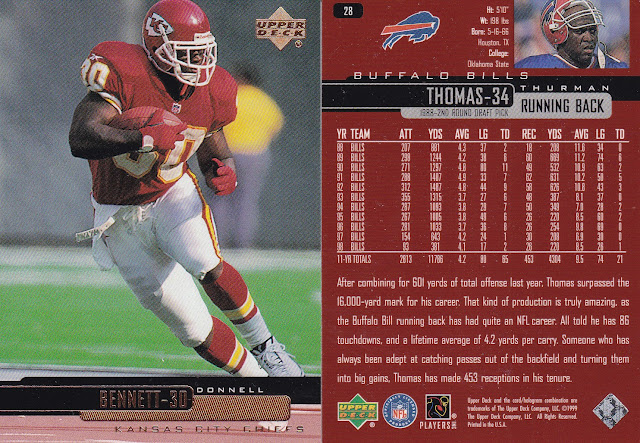 The backs are nice.  I like the color but that font size...wow.  Works great here but in hand it's tough.  You have to love all the stats though.  The Strike Force insert isn't a favorite of mine but Randall Cunningham and that '98 Vikings team were so good.  They went 15-1, 15-1, before losing a heart breaker to the Atlanta Falcons in the NFC Championship.  Fun pack and I've already been stalking boxes of this on eBay. 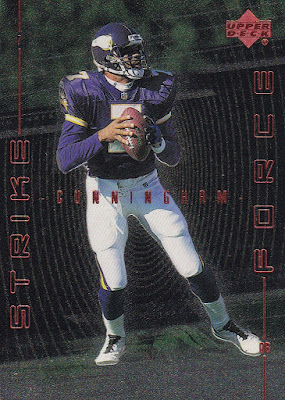