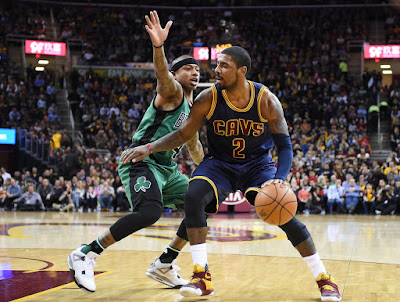 It finally happened and boy it didn’t disappoint.  Kyrie Irving was traded and headed to the Boston Celtics for Isaiah Thomas, Jae Crowder, Ante Zizic and the Brooklyn Net’s 2018 unprotected first-round pick.  I really like this trade and I think this is a win-win for both teams.  And this happens just as it looked like Cleveland was struggling coming up with a decent trade. 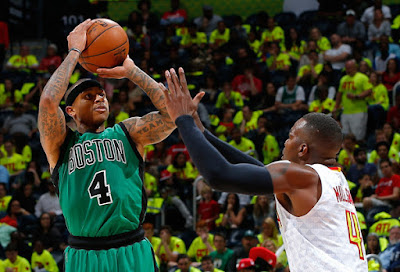 Cleveland gets better by replacing Irving with Thomas while adding Crowder.  Thomas isn’t better than Irving but is a capable substitute while Crowder brings good defense and much needed depth.  I can’t say what Zizic brings to the table except for a cool name.  I think this team could be better than last season’s assuming everyone gels in Cleveland’s system.  For the future Cleveland would have a top 5 pick to help infuse the team with some young talent.  If Thomas plays well and Cleveland wants to retain him they can look at re-signing him once his contract is over at the end of the season.  It also means that if LeBron James leaves in free agency, something I don’t think will happen, they’ll have the Nets’ pick, can let Thomas go, find a new home for whatever holdovers are still on contract and start from scratch.  In theory they have all their bases covered. 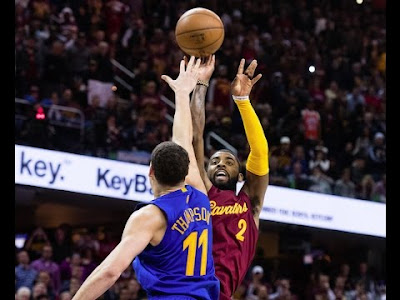 Boston gets a 25 year-old stud of a point guard for at least two years.  Irving may not be there past two years but if he is he can definitely be the cornerstone for years to come.  Combined with Gordon Hayward, Al Horford and some of the other young pieces they have to include the #3 pick in this year’s draft, Jayson Tatum, Boston should compete for years to come.  As with any trade you must worry about how players will gel but I’d expect this to be a good team.  If Irving does leave you still get two years of his top caliber play and Boston has stock piled other first-round picks which should help them reload or can be used to trade for top talent.
Posted by Bulldog at 7:56 PM No comments:

I've enjoyed the Donruss football brand over the years.  The 2017 Donruss football were just released so I was excited to grab a pack of 30 cards.  I'm really happy with this set.  With a mostly white border with some team colored breaks it is simple but I'm digging it.

There is plenty of room for the great in game photos which I really enjoy.  The backgrounds aren't muted.  The nice sized team logo is also a plus for me as well as the rest of the front of the card.  Simple yet eye catching.

The backs are simple and while a little different from years past they are similar.  A write-up, some stats and a dash of color.  Simple and ok.  My insert was a Dick Vitale Fans of the Game card.  I like Dicky V so I'm happy with the card but my favorite cards in these sets are the Gridiron King inserts.  I was disappointed I didn't pull one but there is always next time.

I was happy with my pull with Tom "Terrific" right on top to go along with all-time favorite Deion Sanders as well as Tedy Bruschi and Bill LeSean McCoy.  I enjoyed this pack and will definitely grab more.  I'm also considering grabbing a hobby box at some point.  We'll see. Again the great photos and simple unobtrusive design is a win for me.

I do like retro designs when done right and the 2017 Topps Allen & Ginter baseball cards are a great option for seeing just that.  Their designs don't always vary that much from year to year but they are still pretty nice cards.  The backs are very simple with a write-up on the featured player/star.  With a checklist containing baseball stars, rookies, legends as well as those from pop culture and other sports there is plenty here to like.  These do contain mini cards which I'm NOT a fan of but I know many collectors enjoy.  I also like the cross section of legends and current players.  Again plenty to appreciate and I was able to pull a couple of personal collection players in Hank Aaron and Dennis Eckersley.  I am very happy with this pack and my cards.
Posted by Bulldog at 8:00 AM No comments:

Found a random pack of the 2016 Panini Rookies and Stars football cards.  It looks like I haven't grabbed these before.  Nice pack of cards (10). Definitely had star power with cards of Le'Veon Bell, Drew Brees, Von Miller, Peyton Manning and LeSean McCoy.  Design is pretty good and the backs are nice and colorful.  I pulled two inserts with the Manning Standing Ovation and McCoy Power Tools.  Neither do a whole lot for me but I also can't find anything to complain about.  Nice cards and I'm glad I picked up a pack.

Posted by Bulldog at 8:11 PM No comments:

Bacon Spam - It's Real and It's Good 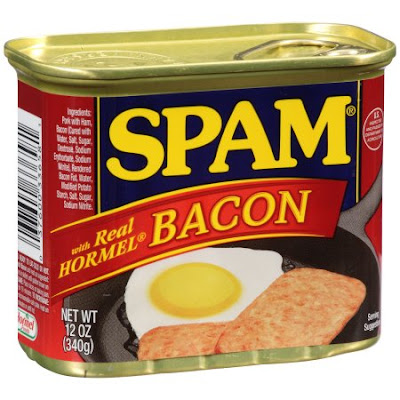 Bacon Spam.  It is a real thing and I’m here to tell you it is good.  Is it good for you?  Probably not but that hasn’t stopped me before.  It contains real bacon which helps the taste.  I make up breakfast for work days so I put this in with some eggs and it is perfect.  I already was in the mode of using regular Spam for that purpose but now I have bacon Spam.  If you already enjoy Spam this may be for you.  If not it may be a good jumping on point.  Seems as though people either don’t like Spam or they do like Spam.  Not a lot of in between.  The link has the ingredients/nutritional facts.  Just thought I’d throw this out there to those who may want to partake.
Posted by Bulldog at 7:40 PM 2 comments: 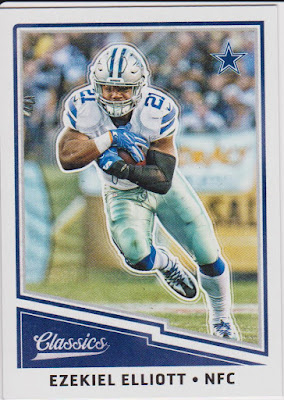 Picked up some of the 2017 Panini Classics football cards.  There were 10 cards in the pack and these aren't that expensive.  I always love retro but I have to admit other than the retired players that are featured there hasn't been much to this brand that really thrills me.  I do think they have a decent design but there is something about these cards that just don't do it for me.  My pull wasn't bad, highlighted by Ezekiel Elliott.  I do like the Super Bowl Heroes insert and wouldn't mind chasing that set.  Again the legends, which number 100 of the 300 card base set, are the attraction for me.  Good chance I'll grab more of these for that fact alone.  Otherwise I'd probably hold off.  This is definitely a personal choice and I think most folks might enjoy them more than me. 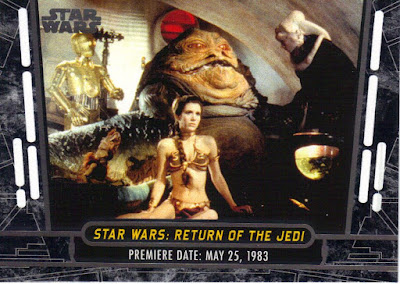 I love these cards!  I'd been looking forward to the Topps 40th Anniversary Trading Cards and they are great.  I used some birthday money some months back and grabbed a hobby box, a blaster, and single packs.  I was in heaven. 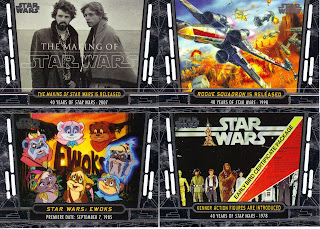 This set covers it all - the movies, cartoons, video games, action figures, art, comic books, books, DVD/Blu-Ray releases, movie posters from around the world, toys.  What didn't they include? 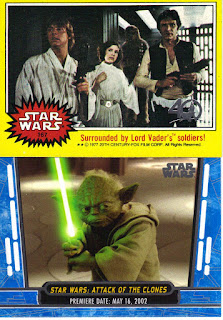 There are buybacks, medallions, autographs, film cells, stickers, parallels and more as inserts. 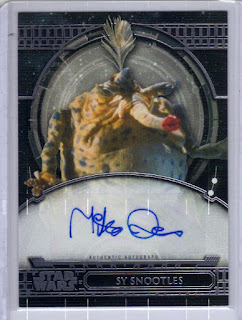 I pulled a Mike Quinn (Sy Snootles) autograph.  Not the sexiest of all the different autos you can grab but I'm not complaining.

My favorites were movie poster cards.  There were posters from all the movies from around the world.  Most I'd never seen and really thought these were too cool. 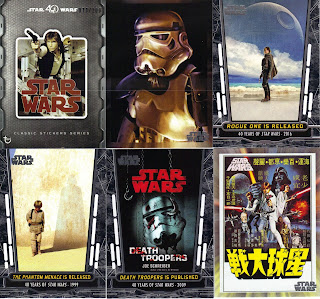 Having this set cover so many different aspects of the Star World universe is wonderful.  They all bring back so many memories and just make me geek out all over again.

These are some of my favorite card scenes.  The Darth Maul fight scene in Episode I is still my all-time favorite from the movies involving the Sith and Jedi.  The classic "I know" scene on Cloud City always bring a smile even if it wasn't under the best of circumstances.  I thought it had great visuals and was of course a pivotal part of the movie.  The arena fight on Geonosis was great in that it showed so many Jedi at one time fighting.  I still like going back and looking at this scene and researching the different Jedi who were featured. 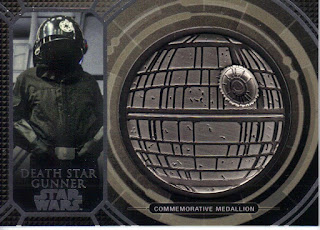 To be honest I can live without medallions... 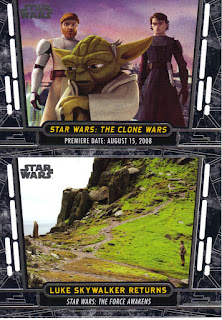 The set was even able to inlclude scenes from The Force Awakens. 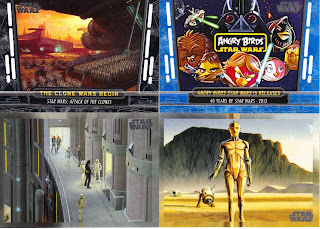 I'll definitely be working to collect the entire set.  This is by far my favorite card set from the Star Wars movies.  I'm already a huge fan and these are exactly what I've been waiting for - though I didn't really even know it. 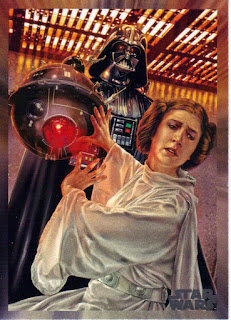 Picked up a few packs of the 2017 Topps Stadium Club baseball cards.  As always you get a little higher price tag, heavier stock, nice design, colorful back of the card, and great photography.  These came 12 to a pack priced at $5.98.  Again a little expensive for my taste but I'm rarely disappointed by this brand.  I enjoyed my pull as well grabbing a few Braves and Red Sox players to include Chipper Jones.  Randy Johnson and Andres Galarraga were the other retired players I grabbed.

The inserts/parallels in the two packs I opened were a Scoreless Streak and Buster Posey Chrome Gold Minted parallel.  Not sure how many are made of each of the Chrome Gold Parallel but it is a nice looking card.  Overall I like the simple, unobtrusive design and great photographs.  The backs are also nice and colorful with a second photo different from the front.  I'll definitely look for singles from this set and I don't doubt I'll also pick up a few more packs in the coming months as these are some nice cards.