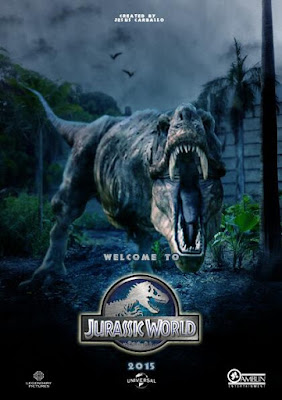 A big part of my father's day weekend was getting to see the Jurassic World movie with the youngins yesterday and I really enjoyed this movie.  I had heard nothing but good things going in from friends who had already viewed the movie.  Online reviews were a little more spotty but I take those with a grain of salt. This was just a good entertaining movie.  Chris Pratt and Bryce Dallas Howard star in this record breaking sequel to the Jurassic Park franchise.  The movie has a quick pace and lets you get right into it without making you sit through a ton of setup.  With a franchise already in place we didn't need to get spun up anyway.  SPOILER ALERT:  There may be some spoilers in my review.  They should be minor but might still give away something important.  Howard plays the too busy in-charge park executive to Pratt's rough and tumble animal tamer.  After all heck breaks loose she calls on Pratt to help find her lost nephews who have come to the park at the very wrong time.  The park itself is very believable in a world with dinosaurs and is fun to see what they've created.  When the new bigger badder dino gets loose people die and the bad guys swoop in to save the day.  Of course that doesn't work with Pratt and and Howard's characters left to clean up the mess.  They can't do it single handed and must enlist some major muscle to help out.

The plot, acting, nor script will win this movie any awards but they don't need to.  This movie does what it is supposed to and entertains.  The two hours go by quickly and you find yourself just enjoying yourself.  I really got a kick out of the references to the original Jurassic Park movie.  This includes seeing what is left of parts of the original amusement park and and the velociraptors and the star himself, T-Rex. Again their are some plot holes or things that make you wonder but they pale in comparison to what is just a good movie.  I think most people will enjoy it as it spans generations from those of us who thrilled at seeing the original in theaters to kids who will get their own opportunity to see dinosaurs on the big screen.  I highly encourage everyone to see this movie if they get the chance. 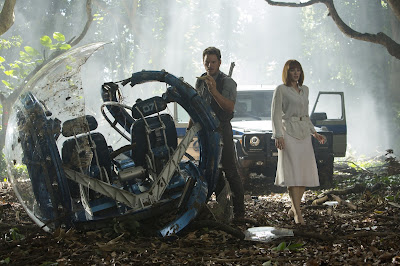 Posted by Bulldog at 7:41 PM No comments: 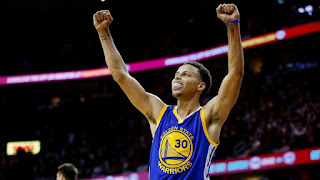 The Golden State Warriors closed out the Cavaliers in Game 6 of the NBA Finals.  I was not surprised but definitely found myself rooting for Cleveland as they made this a tougher series than most thought it would be.  More importantly this is about the Warriors and how good a team they are.  They were the most talented team in the NBA this year, they weren't beset by injuries and had one of the best years in NBA history.  I was very happy to see them win it all and they deserved it.  Golden State waited 40 years between championships.  And they did it while Klay Thompson struggled shooting, Andrew Bogut was benched, and Draymond Green and Harrison Barnes shot 38% or lower.  Andre Iguodala came off the bench to start giving them a much needed spark playing as good a defense as you could ask against LeBron James.  It was also nice to see Steve Kerr do well while not being afraid to make changes when necessary.  This team moves across the bay to San Francisco in a few years so this was also a big win for the city of Oakland.  Great series and well deserved championship for the Warriors.

Cleveland did as much as could be expected considering and no one expected them to grab a 2-1 lead after Kyrie Irving went down in game one.  If LeBron had had even one player who could hit the broadside of a barn, Cleveland could have really given Golden State a series.  But it wasn't to be.  As is he deserves much of the credit for them being able to compete. Cleveland now needs to reassess their needs this offseason in hopes of getting back to the Finals next year. 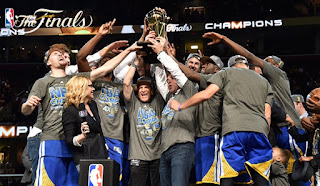 Posted by Bulldog at 6:18 PM No comments: 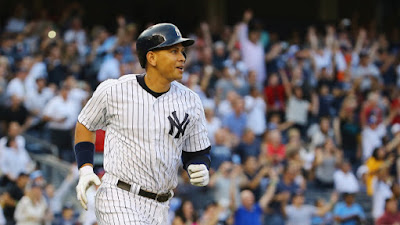 Alex Rodriguez hit his 3000th hit last night.  With all the turmoil around this guy in respect to his steroid use the question of how we view him getting his 3000th hit is an interesting one.  It is even more complicated by the good season he is having.  Before the season everyone wanted A-Rod to just go away.  The Yankees didn't expect anything from him and didn't want to pay him the $22M owed to him this year.  After all the negative press stemming from last year's suspension who could blame them.

Then the season starts and A-Rod is doing everything right.  He says the right things and he is putting very good numbers that could put him around 27 homers and 80 ribbies if he stays healthy and keeps his current pace.  He has been a non-story except for his good hitting.  Now he gets hit number 3000.  With his steroid history there is no way we can celebrate this like we have past greats.  Still I do think you have to look at this as an accomplishment.  Yes many of his hits have been aided by his steroid use but you still have to have the talent to hit the ball.  To that end I still think this is a pretty big accomplishment.

I have not been, and am not, an Alex Rodriguez fan..  This said, it is hard to look at any player from any era and believe they have never either cheated, gained an advantage by "gaming the rules", or taken some type of substance to give them an advantage.  There is too much out there now to say anyone is clean no matter what we think of that player.  This doesn't absolve anyone but I think you have to look MLB history as a whole , good or bad, and put it in perspective.  My bottom line is you don't have to like A-Rod or legitimize anything he has done but I do think we have to at least look at it for what it is.
Posted by Bulldog at 12:18 PM No comments:

Golden State tied up the NBA Finals with the Cleveland Cavaliers two games apiece.  This has been a great Finals.  The surprise that has been Cleveland is at the heart of the it.  Their defense has put them in a position to where they could win this against a heavily favored Golden State Warriors team.  LeBron James is carrying a team that no one, and I mean no one would think could hang with Golden State.  Sure with Kyrie Irving they could compete but without him, and Kevin Love, and Anderson Varejao are you kidding me?  Crazy.  Still I think Golden State is the better team and much deeper.  They can throw 10 guys at you while Cleveland has to count on J.R. Smith and Iman Shumpert to play heavy minutes.  Those two haven't shown yet they can make those minutes consistently be quality minutes.  I think the Warriors have the right idea in going small.  I still think this can go seven games just because Cleveland has LeBron but don't be surprised if it ends in six.  I'll be happy for either team that wins but find myself rooting James and the city of Cleveland.  Hopefully we get more good games which is all we can ask for.
Posted by Bulldog at 8:00 AM No comments: 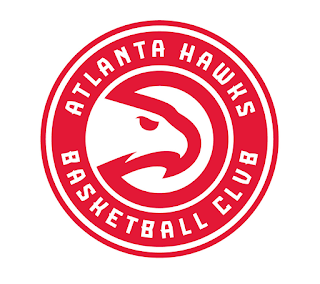 The Atlanta Hawks have unveiled new logos.  The primary logo is in the same vein of what we've seen from Brooklyn, Milwaukee, Philly and Toronto.  It is a solid logo that has the new "Pac Man" style Hawks logo.  Some done care for or are just confused by the "Basketball Club" portion but I'm good with it.  This logo is simple and sharp to me.  I like it.  The partial primary is also a good logo.  Most Hawks fans yearn for the old Pac Man logo and this does a decent job of updating it while staying true to the past.  The secondary logo?  I'm not sure Atlanta isn't paying royalties to Aerosmith for this one.  I can't say I'm a huge fan of this one but I've seen worse.  It also doesn't just remind me of the Hawks.  I'll probably see it at some point and wonder who it is for.  The Hawks will also introduce new uniforms prior to the upcoming draft.  Being a uniform geek I'm looking forward to seeing what they come up with.  I'm also not a fan of the current uniform further fueling my anticipation.  I'm sure the new logos are a hint to something simple with white and red at the forefront.

Posted by Bulldog at 5:25 PM No comments:

Hawks Swept by Cavs to End Their Season 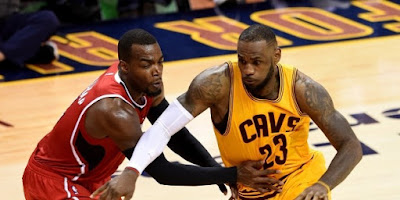 The Atlanta Hawks season ended as they were swept from the playoffs by the Cleveland Cavaliers.  Not surprising but I was really hoping they'd win one game.  It wasn't to be.  Now they have to look at what they need to do this offseason.  DeMarre Carroll and Paul Milsap are free agents and this is where Atlanta will need to start.  How much are they willing to pay Milsap who might be getting a max contract.  Carroll has big upside and will also get big money.  And the contracts they give out will also be key as big free agents look to hit the market after next year.  This is important to the Hawks' future and ability to possibly sign one of those major free agents.  There are also some bigs on the market this year.  Does Atlanta try to woo one of them instead of Milsap?  Maybe even sign a true center and allow Al Horford to play power forward which is what he really is?  The Hawks must also look at adding depth and of course what team doesn't need more.  The draft could be that avenue.  I'm thinking a wing to help out Carroll and Korver.

My personal feelings are the same as many others.  I worry that this team doesn't have that guy they can count on in crunch time or even carry the team when need be.  I know people will say this team doesn't need it but when they weren't gelling as a collective unit I sure wanted that one guy you could give the ball to and think he could get ya points.  Teams figured out they could shut down Korver by just staying with him and it really stifled what the Hawks had done so well all year.  Don't get me wrong.  I was very excited about how the Hawks played this year.  But I'm not sure they are built well to succeed long term.  I don't think they need to turn over the entire roster but they do need some tweaking.  I'll be curious to see what they do this year and I'm excited to what next year might bring.
Posted by Bulldog at 4:49 PM No comments: