This never happened before...

Wednesday was a day I'll never forget.  Late in the afternoon I was speaking to a coworker.  Just a conversation we have many times every day.  Just before we finished my heart fluttered, flip-flopped, beat weird, whatever you want to call it.  All of sudden I could see but couldn't focus.  I started to see stars as I felt light headed on my way to passing out.  Then it passed.  In all it lasted less than 30 seconds.

My coworker noticed what happened immediately and was concerned.  I was able to get past what happened and finished out the day, concerned but pressing forward.  I had quite a bit on my plate to include a trip that was to start yesterday.  I couldn't worry too much about this.  It was prevalent in my thinking the rest of the day and on the way home.  Just before I got into town I felt sick and light headed.  Wasn't even sure I'd make it into town.  Nothing going on with my heart but I felt bad.  I knew immediately I had to go to the emergency room.  I called the wife, and stopped out the house but we were on the way to the hospital within minutes.

The emergency room got me right in to a room and started a flurry of tests.  I can't name them all but they were pretty extensive.  Nothing obvious from the results but with me having two episodes they decided to keep me overnight.  I feel better as the evening goes on.  I think having the good test results helped as much as just getting over whatever happened.  The night went well and more tests were completed the next morning and again the results all came back well.  The bottom line is the heart palpitations I had, which are common to everyone, lasted longer than is common.  This led to not enough oxygen getting to my brain causing the light headedness.  What caused my heart to do that?  That they couldn't answer.  So they sent me home and tell me to rest.  If it happens again then they'll look at it differently with more tests on a different level.

So on the surface it seems pretty benign and it probably is.  So why do I write about it?  Not sure but I felt compelled to.  For me is was a pretty major occurance.  When that first episode occurred I lost control.  I couldn't move and was left to wonder what was happening.  Was this a heart attack?  Would my last moments be this...me at work?  Sounds overly dramatic I know but in those seconds I really had no idea what was happening.  I want to use words like concerned or worried when I speak about how I felt immediately afterwards but they aren't true.  I was scared.  That is a word I don't use lightly.  To that point I don't know what writing about the episode does for me but here I am.  I know that over time I will become less concerned but I definitely won't forget what happened.  Thankfully life goes on.
Posted by Bulldog at 4:41 PM No comments:

Denver-Baltimore - Denver has looked good all year.  Manning has enough weapons on offense and a line that I think they can score on Baltimore's defense.  The Denver defense is good and should have a nice showing against the Ravens offense.  Speaking of, the Baltimore offense has not been very consistent.  I like Denver to be in control of the game for the most part and get Manning's first playoff win as a Denver Bronco.

Green Bay-San Francisco - Green Bay wins this one.  I liked the Colin Kaepernick move by the 49ers but I can't say it has been a big plus for them.  He adds the ability to run and create like Alex Smith can't but he hasn't shown he can throw with the consistency Smith does.  Long term he is probably their quarterback but I don't think he has the experience needed for the 49ers to advance.  Green Bay is playing very well and I just can't pick against the Packers here.  The 49ers defense will be stout but I still think Rogers will lead Green Bay to the win.

Seattle-Atlanta - This should be a great game.  Seattle comes in with lots of momentum, a hot rookie quarterback, good defense and a nice running game.  I believe the running game may be the key here.  Atlanta's new look offense can score but they'll need to be on the field to do it.  If Seattle runs up and down the field on the Atlanta defense, which is a possibility, the Falcons may be looking at another disappointing post season.  As is I think Atlanta wins a close game.  Their defense is average but will keep them in just enough for the offense to get the win for them.  I think Atlanta has finally matured enough to advance in the playoffs.

Houston-New England - Houston hasn't looked right since they were trounced by Green Bay.  New England wasn't any nicer to them.  They also looked bad last week though they did pull out a win against Indy.  I also can't pick against Tom Brady yet.  New England's defense is suspect but Brady and the offense is as potent as ever.  I'll take the Pats all the way.
Posted by Bulldog at 3:57 PM No comments:

NFL Playoff Picks - How did I do?

In September I wrote a quick preview of the NFL season.  In that post, which you can see here, I did my best swami immitation and picked the playoff teams as I thought they'd play out.  Here they are:


NFC - Division Winners: Philly, Green Bay, Atlanta, San Francisco
Wild Cards: New Orleans, Detroit
AFC - Division Winners: New England, Baltimore, Houston, Denver
Wild Cards: Kansas City, Pittsburgh
Super Bowl: Green Bay vs Baltimore
All this shows you is I won't get paid to do this for a living anytime soon.  I did pick three division winners in the NFC but whiffed on Philly, New Orleans and Detroit.  The AFC played out a little better for me.  I nailed all four division winners but again didn't get either of the wild card teams correct.
In the Super Bowl I had Green Bay and Baltimore.  While I think Green Bay has a very good shot of getting to the Super Bowl I now have Baltimore behind Denver and New England if I was ranking the playoff teams.  If asked today I think we get Denver and Atlanta in the Super Bowl with Denver winnign a close game.  I would love to see that but of course would want to see my Atlanta Falcons come out on top.
Posted by Bulldog at 4:12 PM No comments: 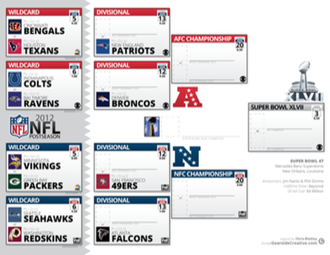 I've got a few minutes and I need to talk about the NFL playoffs.  I'm excited to say the least with Atlanta being the #1 seed in the NFC and they are playing well enough to be the NFC's representative in the Super Bowl.  Overall I'm leaning towards a Denver-Atlanta Super Bowl with Denver winning.  I hate thinking that but I'm not sure Denver is the same team that lost on Monday night to the Falcons early in the year.  It would be great to see a rematch of the 1999 Super Bowl when Denver blew out the Falcons.  And I'd love to see Atlanta do the blowing out this time.
The other teams I see as contenders are New England in the AFC and the 49ers and Packers in the NFC.  No offense to Houston but they have too many holes as do the Ravens so this should come down to Denver and New England.  San Francisco and Green Bay can give Atlanta a run any day of the week so I wouldn't enjoy seeing either in the championship game.  Seattle is a good story but I don't see it having the legs to get them far in the playoffs.
But I am getting ahead of myself.  This weekend's games will go along way to how this all plays out:
Cincy-Hous - I think Cincy wins this game.  Something about both teams has changed since earlier in the year with Cincy rising and Houston falling.  Can't put my finger on it but I like the Bengals to advance.
Colts-Ravens - I so want to take Indy here but I'm going to go with the veteran Ravens in a close game.  But it would be great to see Luck battle Manning in the playoffs wouldn't it?
Vikings-Packers - Green Bay is home and will win.  May not even be a close game.  Aaron Rogers will have a big day as Green Bay rolls.
Seahawks-Redskins - This is a great match up and I'm not sure where to go with it.  I have a feeling Seattle will run all over the Redskins defense but RGIII will still have a good day.  I'm thinking this is a close game but the Seahawks move on to face Atlanta.
﻿
Posted by Bulldog at 6:00 PM 1 comment: 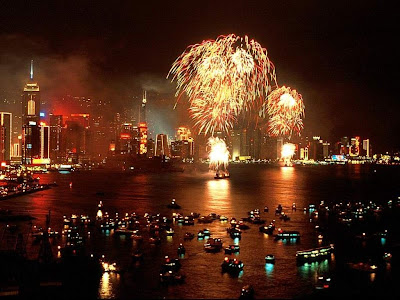 Happy New Year to all.  I had a wonderful New Years Eve.  The wife and I hid out in a hotel in town for two nights.  Can't say we did much of anything other than just enjoy some quiet time with each other.  We did the same thing last year but only spent one night.  It is good for us as a couple.  We can get away from the youngins for a little bit which is always good for us.  One of the things we've enjoyed over the years is the Twilight Zone marathon on FX.  Easy fair that is fun to watch.  Some of those episodes were years ahead of their time.  I think every couple should get away from time to time to enjoy some time away from our busy lives.

Not sure what to expect of 2013 though there is plenty on our plate.  We have our three oldest living at home but we think that will change this year.  Our 17 year-old (mine) who lives with her mom close to here will be graduating from high school and moving on to college.  Her goal is to be a lawyer so we have our fingers crossed.  No matter what this year brings the our main goal will be getting each youngin ready for their next chapter in life.

Personally I always strive to be a better person.  I'm pretty critical of myself with much of it deserved.  Just have to work on some of the little petty things to help me be a better husband, father, friend and human.  Pretty heady stuff.  Hopefully I can do a better job of it than I have in years past.  I wish the best in 2013 for all those I know and love.  I'm always optimistic (no matter what the wife thinks) so I have no doubt 2013 will be a good year.  HAPPY NEW YEAR!
Posted by Bulldog at 5:34 PM No comments: