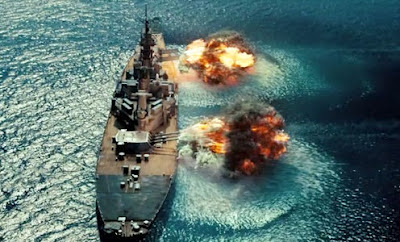 I very much enjoyed the Battleship movie this weekend.  I didn't go in with any expectations which might have helped.  First please don't expect any Academy Award worthy performances out of this movie.  Do expect action after the pre-requisite setup.  It would be so much easier to punch holes in the movie as opposed to writing about what I enjoyed about the movie but I'll give it a shot.

First I just enjoyed the movie.  A great gauge for me is if I'm looking at my watch while watching the movie.  Even though this was a two plus hour movie I thought the time went by very quickly.  I was also sucked in by the rock-n-roll music placed in just the right places as the action ratcheted up.  I will ding the movie for not getting the famous tag line "you sank my battleship" into the movie in some fashion.  But if that is the worst I'll throw at the movie it is all good.  Again if you are a fan of action this movie has.  Just don't expect much substance to go along with it.
Posted by Bulldog at 8:05 PM No comments: 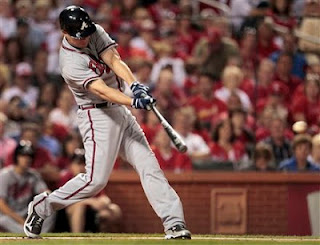 Last night I was able to attend the Atlanta Braves game in St. Louis against the Cardinals.  The Braves won 9-7 in 12 innings.  First the experience was great.  I live and work in Illinois.  I took the metrolink train directly from work to the stadium.  I attended with a group of friends from work and their families.  They all rooted for the Cards while I was the lone Braves fan amongst us.  I wore my Chipper Jones jersey and Braves hat but was definitely not the only Braves fan in the stadium.  The train let us off right at the stadium which was built in 2006.  I was blown away.  It looks great and I can't say I was dissapointed by anything.  Ok maybe the prices for food but that is part of the experience.  The concorse areas were very open and I never felt confined as you might in some of the older stadiums.  The game was sold out with over 45,000 in attendance.  The seats were comfy and while we were in the upper deck they would fall in the "not a bad seat in the house" category.  The fans around me were very good natured about me being a Braves fan and added to the fun.

Prior to the game the Cardinals retired Tony LaRussa's #10.  This was a great bonus to being at the game.  I am someone who enjoys the game in all it's glory and history and appreciate others who aren't directly related to teams I root for.  Tony is right there near the top when it comes to managers.  He's won three World Series Championships and I think the two with St. Louis really stand out as those teams won't be looked at as the most dominant in history.  Last year's title specifically was a great example as he had to deal with ace Adam Wainwright being out for the season, no defined closer for a good part of the season, injuries to Matt Holiday, and a defense that won't make anyone write a book.  The front office did a great job of bringing in players like Edwin Jackson, Rafael Furcal, Arthur Rhodes, Octavio Dotel among others which were a huge part of why they won.  Still they had an amazing September to just get into the playoffs and then won three playoff series against favored teams (Philadelphia,  Milwaukee, Texas) culminating in an exciting seven game World Series.  I know he wasn't always the most popular guy even amongst his team's fans but he was a great manager who deserves the accolades he gets.  What I enjoyed the most was seeing some of the great players he's managed over the years in attendance.  Dennis Eckersley, Dave Stewart, Tom Seaver, and opposing manager Joe Torre were the highlights for me.  Too cool!

The game itself was a great one.  Atlanta took an early 5-1 lead but the Cardinals came back powered by four homeruns, two by Carlos Beltran.  He also added a double and a triple.  What a monster night.  I really questioned why Atlanta pitched to him in the 5th with first base open and runners on second and third.  Yes Allen Craig is having a nice year but he isn't Carlos Beltran who happened to be killing you at the plate that night.  He promptly hit a triple.  The game went back an forth until the game was tied at seven after Beltran's second homer in the eighth inning.  Johnny Venters blew the save but the Braves bullpen still had a good night giving up that one run in 7 2/3 innings of relief.  Livan Hernandez made it interesting at times to include loading the bases but got the win.  Finally in the 12th inning Chipper got on with a leadoff walk.  While you love having your leadoff guy on in that situation knowing Chipper couldn't be pinch ran for and he doesn't have much speed I knew we needed some help.  That came when the next batter, Jason Heyward, hit a two run homerun putting Atlanta up for good.  Craig Kimbrel then came in for his 11th save.

Last night was also a pleasure I was able to see Chipper play in his last season.  He received a standing ovation in his first plate appearance by Braves and Cards fans alike.  I joked by thanking my friends for the #10 that had been mowed into the outfield in honor of Chipper (maybe it was for LaRussua...).  It was even better as Chipper went 2 for 4, knocking in 1, walking twice and scoring twice.  All around as a Braves fan I couldn't have asked for much more.  It was a great game and great experience.  ﻿
Posted by Bulldog at 1:53 PM No comments:

I along with a gazillion other folks went to the Avengers movie this weekend.  I am a comic fanboy so I've really been looking forward to The Avengers.  The added bonus was being able to go with my four youngins and beautiful wife.  She's still lost despite the son and I's many inputs trying to help her digest everything going on.  We went to a 3:55 showing yesterday in the small town in which we live.  That means we didn't have to fight the huge crowds in larger venues.  The link below shows just how many folks watched the movie this weekend:

"The Avengers" Is The Biggest Movie Opening Ever

The move itself was very fun.  Not a ton of surprises but you get what anyone could want with lots of fighty fighty.  Thor vs Hulk, Iron Man vs Thor, Loki vs Captain America, bad guys versus everyone, and much more.  What else could you want?  I liked the plot as it wasn't too out there for the average viewer nor too distorted as to make a comic book fan leave the theater wondering "what were they thinking".  Each character received plenty of screen time to include the more minor characters of Black Widow and Hawkeye allowing time to provide them some back story.  Many good one liners as you'd expect.  My favorite scene is the Loki-Hulk fight near the end of he movie.  I won't spoil it with details.

Not a perfect movie but I think the large majority of those wanting to see the movie will enjoy it.  Won't be too many folks leaving disappointed.  Someone smarter could dive into the nuisances of the movie but I'm not the smart one.  For me The Avengers was entertaining and I highly recommend it to everyone.
Posted by Bulldog at 5:16 PM 1 comment: