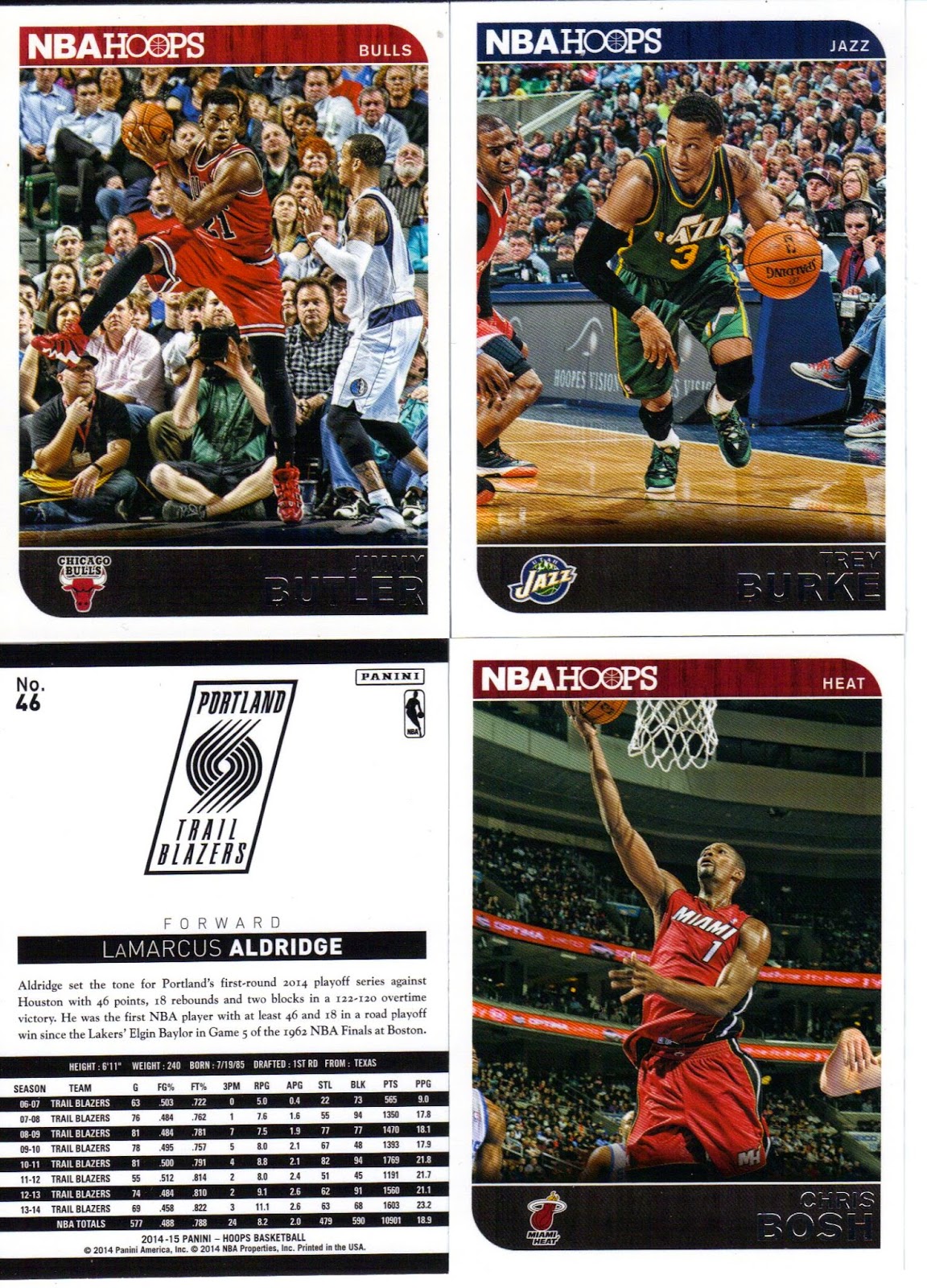 Picked up a couple of the Hoops brand cards.  The first I wasn't impressed with so I grabbed a second pack yesterday to see if the set could redeem itself.  Bottom line is I'm not that impressed.  I know this isn't Panini's signature brand but it just feels as they did the bare minimum here.  Last year's set was better though the 2011-2012 set was also just so-so.  The fronts are ok with the brand and team name on a colored strip at the top.  The photos are good quality though a few made me shake my head.  Can't see the player's face or just an awkward picture.  The team logo and player's name are on a black strip on the bottom.  As always I'd prefer to see the player's position on the fronts of cards.  The backs are black and white again and for me very hard to read without a magnifying glass.  Very frustrating.  The backs include the card number, team logo, NBA logo and player's position at or near the top.  The middle portion includes the player's name and some quick factoids on the player.  Next are his height, weight, birthdate, round drafted, and college attended.  Then come the stats for each season they've played - games, FG%, FT%, 3PM, RPG, APG, steals, blocks, points and PPG.  Why do we need totals for points, three pointers, steals and blocks.  I never, EVER, talk to other fans and say "did you see player X had 200 total steals last season?".  I, and everyone I know, talks in per game numbers.  "Player X average 2.5 steals a game." That is how the NBA world works.  I just don't get why they continue to put stat totals on NBA trading cards.  Frustrating.  Again I think this is an average set at best. 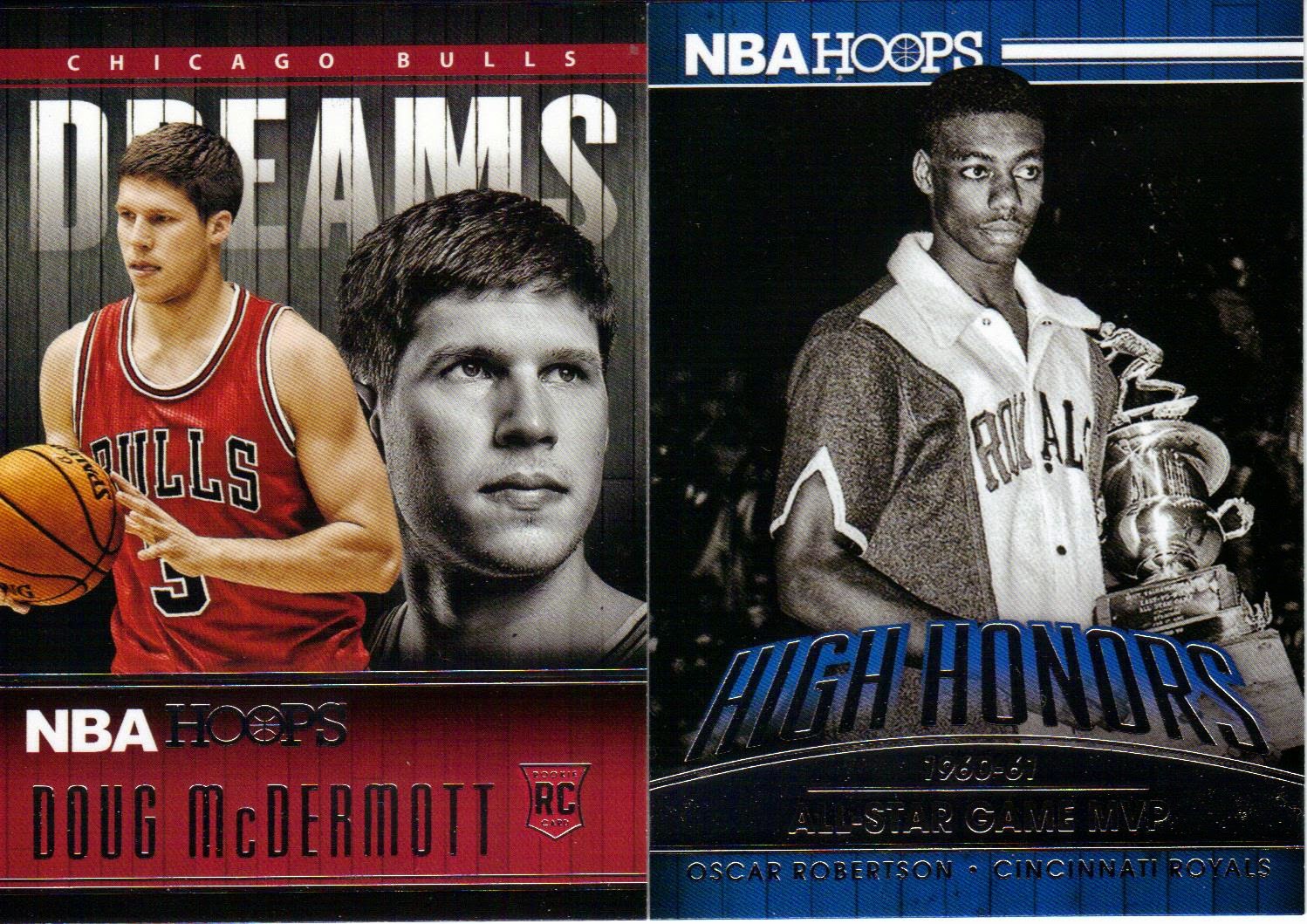 The one plus of the cards I bought is my very first autograph card.  I pulled an Anthony Bennett Great Significance signature card (#11).  Pretty cool.  Bennett isn't a player I follow and is probably still a bust but he has improved ever so slightly this year in his first year in Minnesota.  Not sure what I will do with the card but odds are it will be coming to an online auction site near you soon. 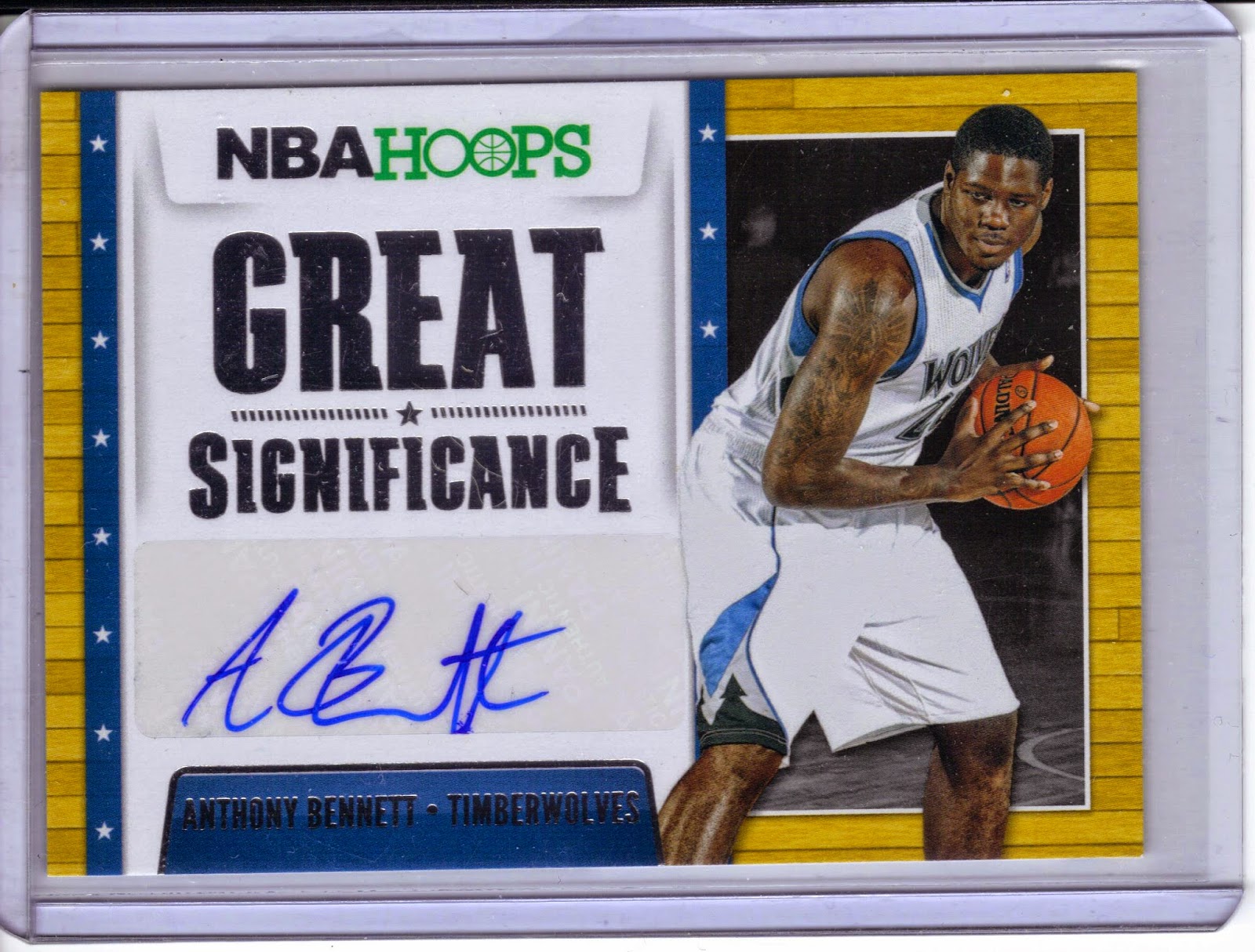 The 1967 hit In the Heat of the Night was shown yesterday at the local theater.  The movie was shot right here in town so the locals have always had a connection to it.  While the movie is set in Sparta, Mississippi it was actually shot right here in Sparta, Illinois.  The movie was very controversial and shooting in the deep South wasn't a good idea.  So for a donation of canned goods for the local food pantry I had a ticket for the show.  It was great.  When we arrived at the theater there were photos from the movie displayed as well as some behind the scenes shots.  As I listened to folks who were walking by the photos I heard things like "my sister-in-law was in that scene" or references to where the scenes were shot in town.  This was awesome.  I love that kind of stuff.  Once I sat down there was more of the same.  As movie facts and trivia cycled on the screen prior to the movie starting folks talked about the movie with pride.  The crowd definitely skewed older but I was surprised how many younger folks made it out.  It is also a thrill to see places on screen that we all recognize.  Once the movie was over no one was in a hurry to leave and just wanted to talk about the movie.  This was a wonderful experience and I'm very happy I had the opportunity to make it to the showing.

As for the movie itself I'd only seen part of the it prior to yesterday.  What I had seen I really enjoyed.  The plot revolves around Sidney Poitier's detective, Virgil Tibbs, who is drawn into a murder investigation in a small southern town while just happening to pass through the town at the time of the murder.  Police Chief Gillespie is not happy to have a big city black police officer in town but they form a very uneasy alliance to catch the murderer.  The fun starts when Portier is brought in as a suspect and Chief Gillespie finds out he is really a Philadelphia homicide detective.

As the movie progresses Tibbs and Gillespie must deal with the extreme racism of the South as well as their own prejudices.  The acting by Steiger and Poitier is nothing less that stellar.  Steiger won the Oscar for Best Actor in a Leading Role.  The smaller characters and their great characterizations help fill out the small world that is Sparta.  The movie was nominated for seven academy awards, winning five, including best picture.  This really is a good murder mystery that is a joy to watch.  I'm not just gushing because of the local history.  This is a great movie.

Note:  The Walking Dead fans will see Scott Wilson make his film debut in this movie as Harvey Oberst, a small time thief.  Wilson is best known as Hershel Greene in the hugely popular zombie series.

Posted by Bulldog at 8:59 AM No comments:

Email ThisBlogThis!Share to TwitterShare to FacebookShare to Pinterest
Labels: In the Heat of the Night, Movies, Rod Steiger, Sidney Poitier 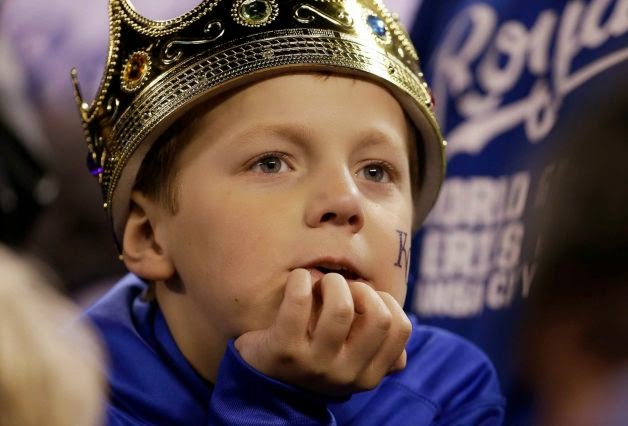 This is more about the Kansas City Royals than say the World Series itself but do let me touch on the games for just a moment.  The San Francisco Giants, and more specifically, Madison Bumgarner bested the Royals this series.  While the team's ERA's aren't that much different (SF 3.98/KC 4.28) the hitting for the Royals was just not there.  The Royals' .249 batting average and .291 on base percentage led to their demise.  With their speed a few guys on base here and there could have made a huge difference in the series two close games.  But it was not to be.  Bumgarner pitched 21 of San Francisco's 61 innings and had a 0.43 ERA, 2 wins, 1 save, 1 complete game and only walked one while fanning 17.  Outstanding World Series for him and the Giants deserved to win.

I feel for the Royals and their fans.  I was rooting right along with them.  They are in my top five of MLB teams and I love the underdogs. And who is a bigger underdog than K.C.?  Ok, maybe the Cubbies.  Still it was hard.  They are a lovable team who was just fun with their brand of running and youthful exuberance.  I was rooting hard knowing that anything less that the title would hit the team and the fans hard.  I do hope that at some point soon they can all reflect on it for what it really was which was an amazing run, grab all the American League Champions gear and swag they can and be happy for what they accomplished.  It truly was magical. Eight and 0 going into the World Series, sweeping the Tigers and Angels on their run to the American League Championship.  No one, no one saw that coming.  I know it won't be long before the Royals see the playoffs again.  Still as a small market team I do know that they'll have to make financial decisions on players which will make it tough to sustain the momentum. Right now though it should all be about October and the fun the Royals brought to Kansas City. 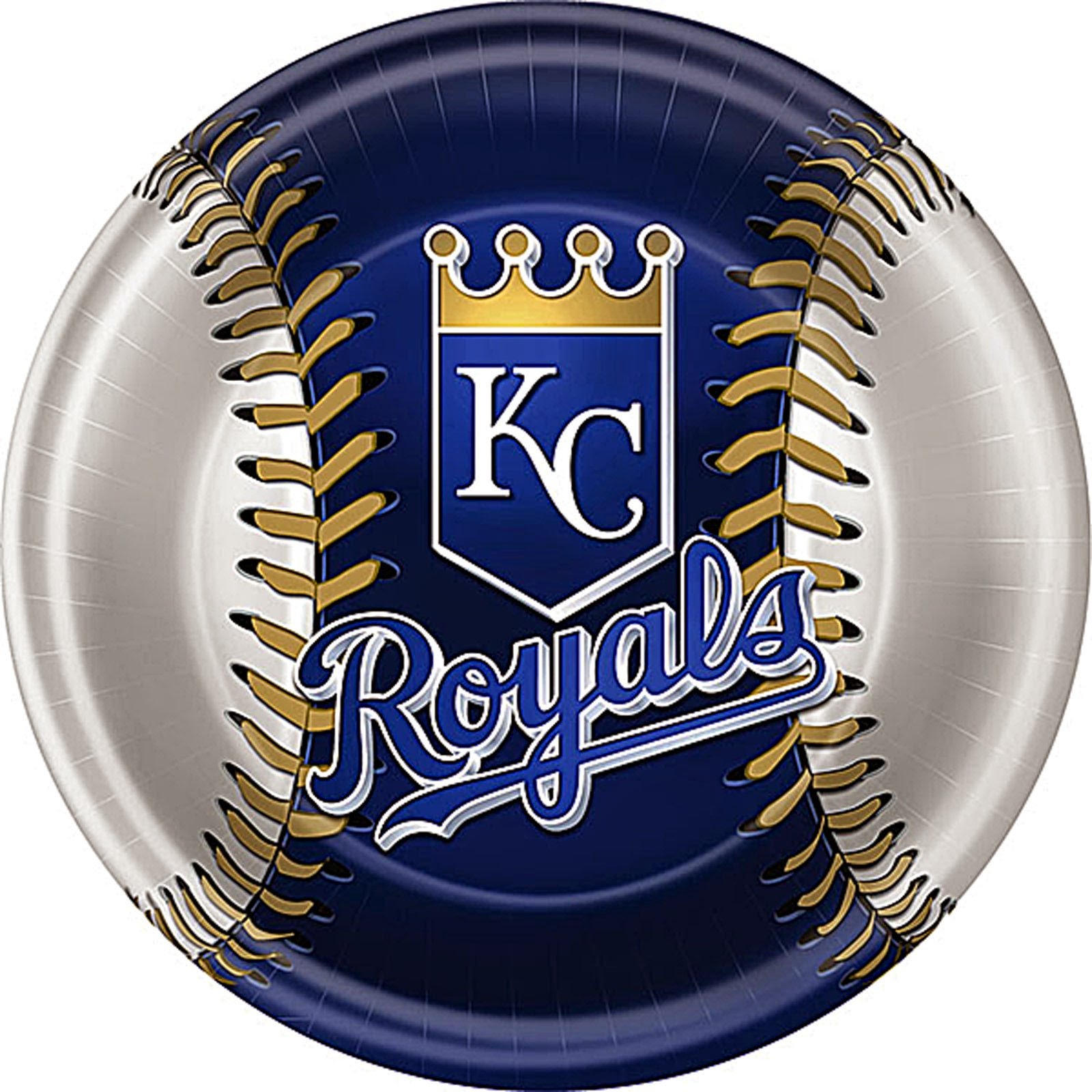 Posted by Bulldog at 3:00 AM No comments: 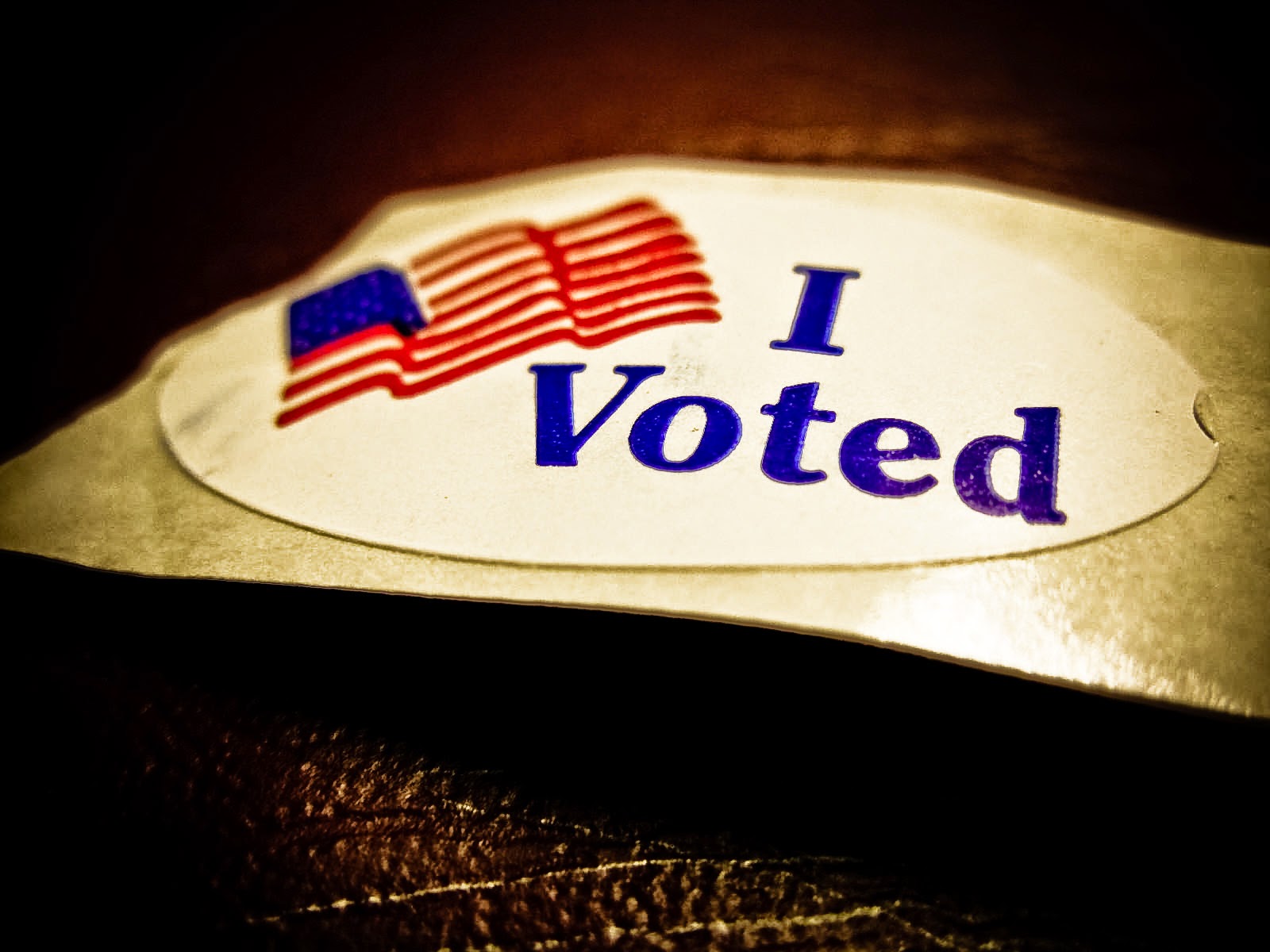 While there are definitely millions of others who will vote today I want to note that I voted today.  When younger I was pretty cliché in my varied record for voting.  It is something that is so important and so easy I'm definitely not proud of my spotty past when it comes to casting a ballot.  But all that is behind me.  I make it a priority now and want my youngins to take the task to heart as well.  Tonight I, my wife and two kids all voted.  If asked I'll tell you I'm a Republican but I definitely won't hesitate to vote the other side of the aisle if I believe someone is the better candidate.

Of course research is the key.  Sometimes that can be hard as much of what is out there pertaining to candidates is biased  That is one reason I've really come to like watching debates and the national conventions come elections for the president.  That way I get it straight from the horses mouth.  No matter who I choose it is always complicated.  There are pros and cons to all candidates so you have to go with your heart.

No matter why or how someone votes it is just important that they get out.  I'm ok with someone clicking all Democrats or all Republicans.  At least their voice is being heard.  It is easy to dismiss some voters as not having all the facts or being narrow minded.  I am just happy they vote.  We've seen the numbers of voters at all-time lows in recent years and that is worse than my candidates not winning.  So I hope everyone got out today and voted. I'm happy I did.
Posted by Bulldog at 8:30 PM No comments:

Found some older basketball cards at the show particularly the late 60's and early 70's.  Many I really hadn't seen in such quantities but really couldn't find many that made me want to pick them up.  Still I found a few cards that caught my eye.
Posted by Bulldog at 9:00 AM No comments:

Here are the football cards I found.  No huge finds but I did find some I hadn't seen in a long time.  There was one dealer who had plenty I would have picked up had I had the means but the money just wasn't there.  I know, because I kept looking in my wallet hoping it had shown up since the last time I checked...
Posted by Bulldog at 9:00 AM No comments: 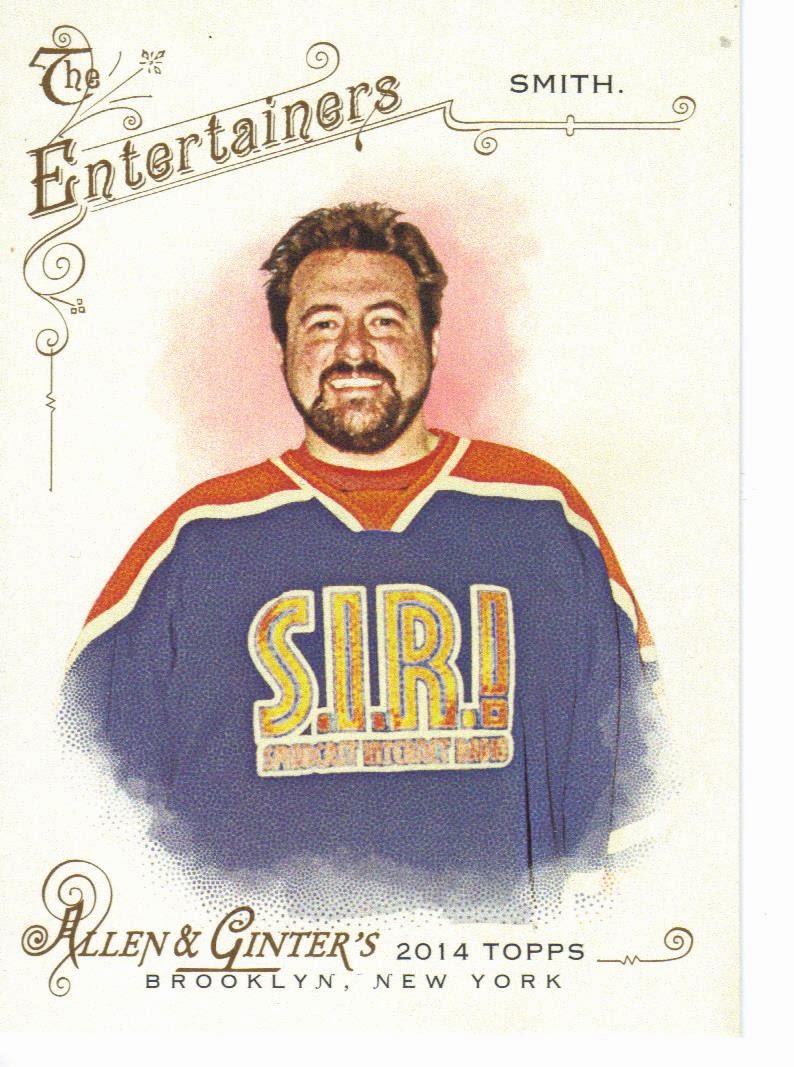 I attended the October Westport Sports Collectible and Autograph Convention in St. Louis.  I also went to one earlier this year and blogged about that experience as well.  As always I went with my buddy and we had a good time.  I'll post about the different cards I picked up starting with baseball today.  First though I have to mention the school girl moment we had.  They had a pretty impressive lineup of stars doing autographs to include Bo Jackson, Robin Yount, Bob Gibson and other local sports heroes.  So my buddy and I are leaving the hotel for lunch when none other than Bo Jackson is getting out of the SUV that brought him to and we walked right by him.  [cue school girls giggling] We didn't say anything to him but it was quite the thrill.  That may sound weird coming from a forty-five year old man but the sports nerd in both of us was very excited.  And yes I've told the story to anyone who would listen whether or not they cared or even knows who Bo Jackson is.  Now that I've got that out of the way on to the cards.


I had heard or read about the Kevin Smith card above and couldn't pass it up when I saw it.  I enjoy his TV show Comic Book Men and some of the podcasts he and his crew do which you can find here.  Combined with it being an Allen & Ginter card it was a win-win.
Posted by Bulldog at 8:10 PM No comments: