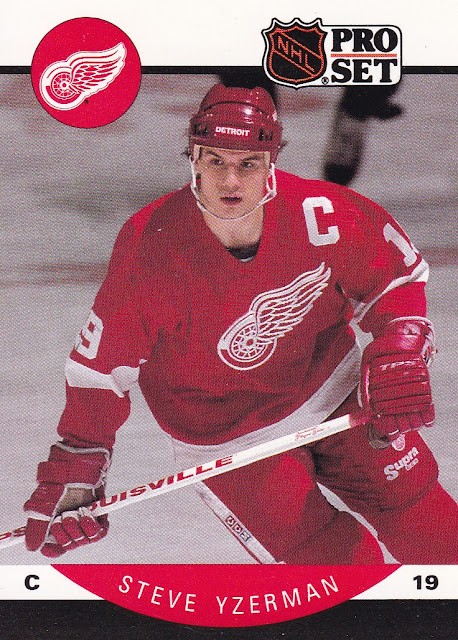 1990-91 Pro Set Hockey: The NHL Finals have started so let's do some hockey.  I'm not really a hockey guy but I enjoy looking at the cards and going back in time is always fun and we'll kick it off with a Hall of Famer. He played all 22 of his years in Detroit and won three championships.

This pack wasn't as stacked as other packs from this era I busted recently but it was still fun.  I like the design overall but that top border could have been a bit smaller. 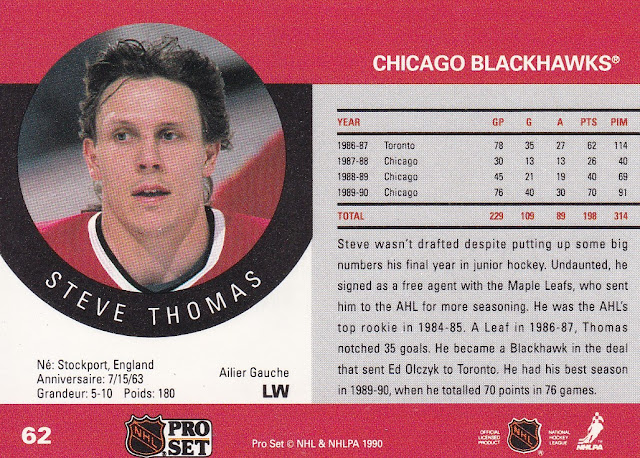 Only thing missing here is a team logo.

I enjoyed this pack as seeing some of these old jersey like the Winnipeg Jets are fun.  I have no rooting interest in the current Stanley Cup Finals but I would like to see Tampa Bay win. 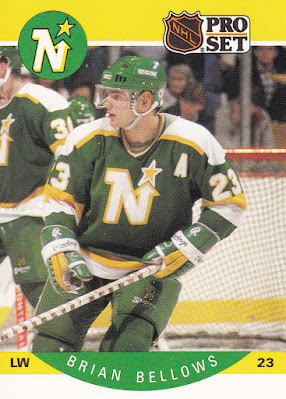 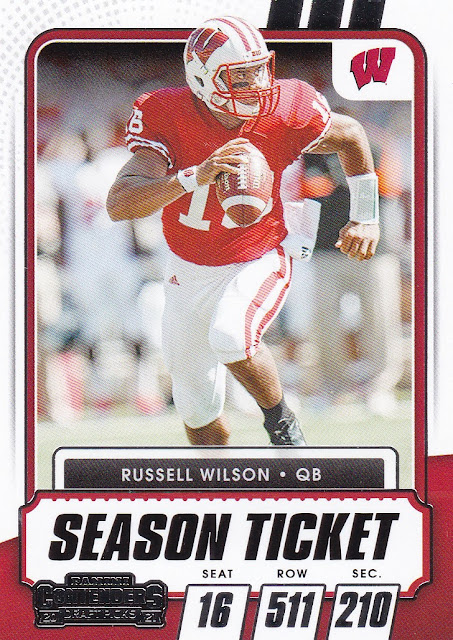 2021 Contenders Draft Picks Football: I found this pack in the wild Friday and thought I'd already grabbed a blaster of these at some point so I only picked up one.  I was wrong and wish I'd grabbed at least one more pack.  That said this one delivered an autograph so I can't complain. I didn't choose the top pack so I got lucky on this one.  We'll kick it off with Russell Wilson.

The base design is a improvement on last year's offering which didn't give the photos their due.  I like this design.  Some of the detail in the rounded corners up top, the indented corners around the "Ticket" area and how the Seat/Row/Sec look at a slant.  The ticket approach on this set year after year isn't for everyone but I've always been a fan of Contenders as a whole. 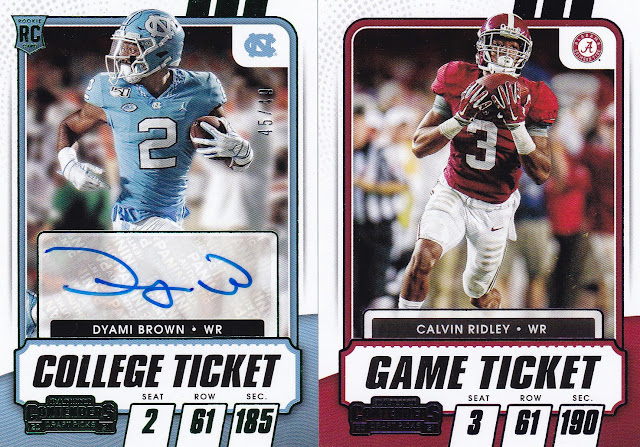 Probably one of the better football autos I've ever pulled especially for a rookie.  Dyami Brown is a third round pick for the Washington Football Team.  Never know how that'll play out but a good pull none the less.  That card is a green parallel.  That Calvin Ridley is a purple parallel.

With the auto this is of course an excellent pack but I was pretty happy with the rest of the pack too.  I really like the DeAndre Hopkins Legendary insert.  While the primary photo is black and white it is the colors of this card which make me like it.  They look better in hand in my opinion.  Fun pack and maybe I'll be lucky enough to find more of this at some point. 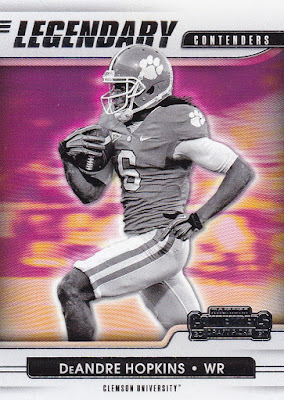 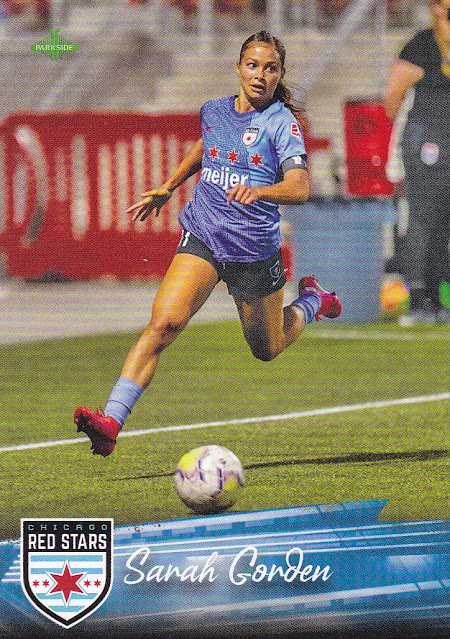 2021 Parkside National Women's Soccer League's "Premier Edition": Parkside Cards' NWSL cards have shown up in Wal-Mart and after seeing a break and what might be found I took a flyer on a box.  Each box comes with 25 cards.  The base set is 200 cards so getting a complete set will take some doing going this route.  On card autographs can be pulled including superstar Megan Rapinoe

The base design is simple but effective.  The photos are good.  There are parallels as well as photo variations that can be pulled. 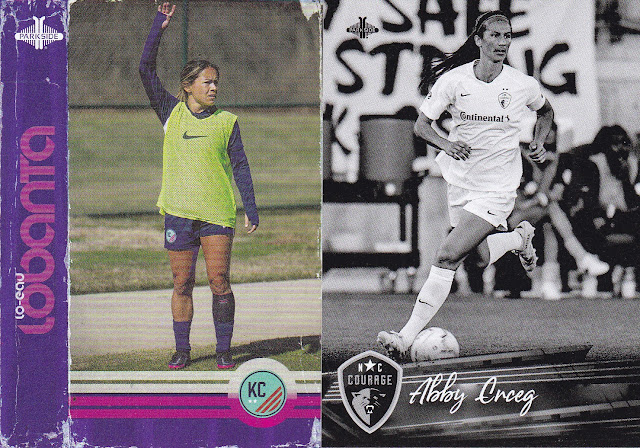 The Vintage insert is on a heavier card stock made to look like a well worn card.  I really like this design.  It really does make you think this card came from the 70s.  That Abby Erceg is a Black and White parallel.  There are 700 of those parallels for each player.

Some player cards have stock press photos but with the large team logos in the background I call that a win.  The backs are simple and need some stats but are fine with me otherwise. 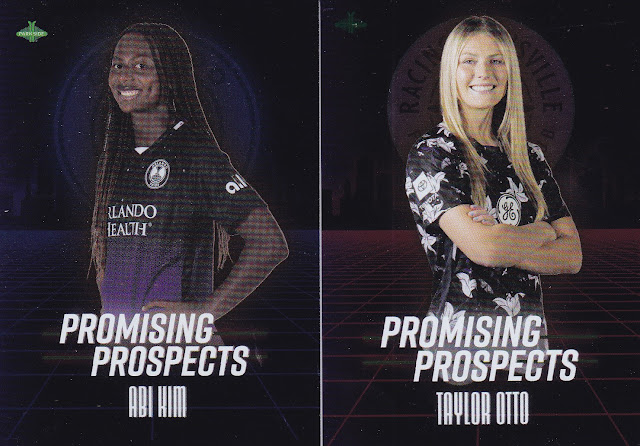 Young players get some card time on these Promising Prospects inserts.

Those cards on either side of Andi Sullivan are foil inserts and obviously don't scan that well but look good in hand.  I'm not a soccer fan and this is my first pack of soccer cards I've ever busted.  Was it fun?  Yes.  Do I know what to do with these now?  Nope but no regrets. 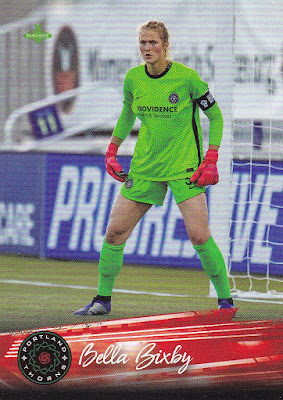 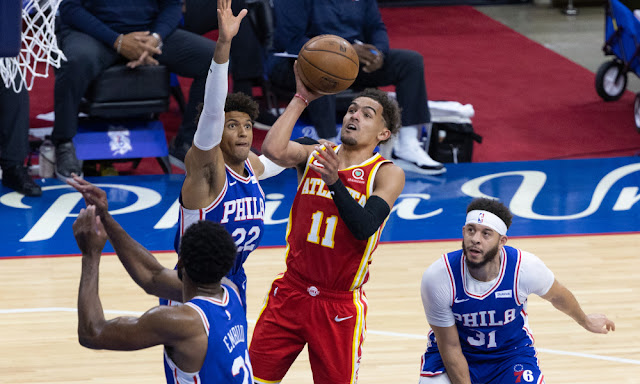 The Atlanta Hawks advanced to only their second Conference Finals in like 50 years with a gritty 4-3 series win over the 76ers.   It took everything the Hawks could muster but it secured a shot at the Milwaukee Bucks who come in after their own seven game series with the Brooklyn Nets.  At first glance the Bucks are deeper and seem to have the edge as is to be expected but the 76ers were the same going into that series.  I, and probably every other Hawks fan, would love to see Trey Young hit a higher percentage this series.  He is a great facilitator and fun to watch while also able to make a fan cringe.  Those 28-30 foot threes are great when they go in...but as exciting as they are he isn't Steph Curry.  Still he is the reason the Hawks are where they are and will be a huge part of what the Hawks accomplish against Milwaukee. My keys to the series is shooting.  The Hawks have a bunch of shooters and as we see with any team when they are hot they are hard to beat.  If not they can still win by being aggressive going to the basket but the Bucks are good rim defenders.  Should be fun.   I'm excited and can't wait to see what the series brings.
Posted by Bulldog at 6:44 AM No comments: 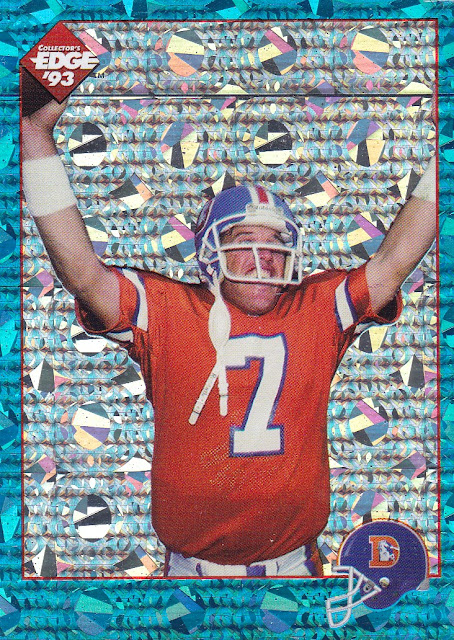 OhioTim and I have done trades in the past so was I happy when he reached out with more cards to send my way.  I was blown away when I opened up the package yesterday.  There are so many cool cards. I'll kick it off with football and this John Elway Two Minute Warning insert from 1993 Collector's Edge.  Definitely looks like a design you could see in today's packs as a parallel.

Tim did a great job paying attention to some of my different likes as a collector including the Wolverines (surprised he didn't just burn the cards being from Ohio) and my love of the Buc's Creamsicle unis.

I don't receive a lot of basketball cards in trades but as a big NBA fan they a joy to see. Tim included some so I was pretty stoked.  These two are in the acetate family of cards from sets I've never heard of.  The first is from 1998-99 SkyBox E-X Century while the other is a Two-On-One insert from the 1998 Press Pass Double Threat set.  Great cards. 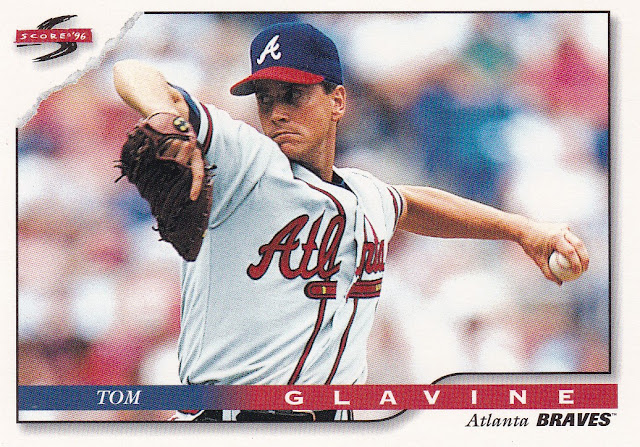 Plenty of Atlanta Braves and I really like this '96 Score Tom Glavine.  The photo and simplicity in design really do it for me.

The colors on the '95 Fleer design are groovy...really I do like them.  There were many stickers included which I was very happy to see.  I hardly had any until now.

All cool looking cards.  Those 90s Dominators are cards I've always like. 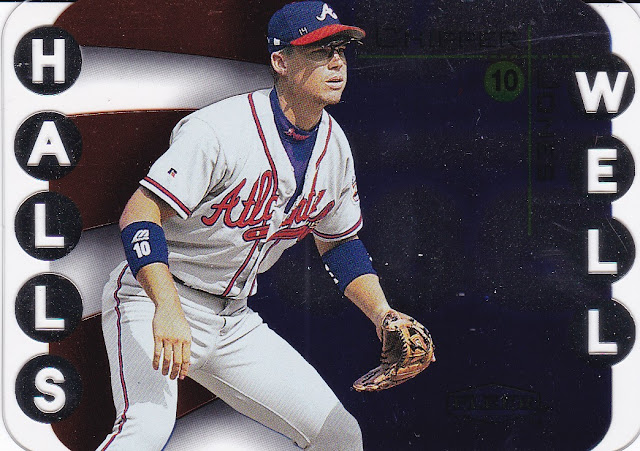 Another really cool card is this 2000 Fleer Tradition Halls Well Chipper Jones.  The corners are rounded helping it stand out from other cards.

Plenty of BoSox in my package.  Just liked the back of this Mo Vaughn card with him looking all cool in sunglasses.  Or maybe like he's about to kick someone's ...

Oh yeah there's NASCAR!  Dale Earnhardt and Rusty, my favorite driver, did plenty of hard racing against each other back in the day.

Some Dale and Dale Jr. goodness as well as Kyle Busch who is my favorite current driver. 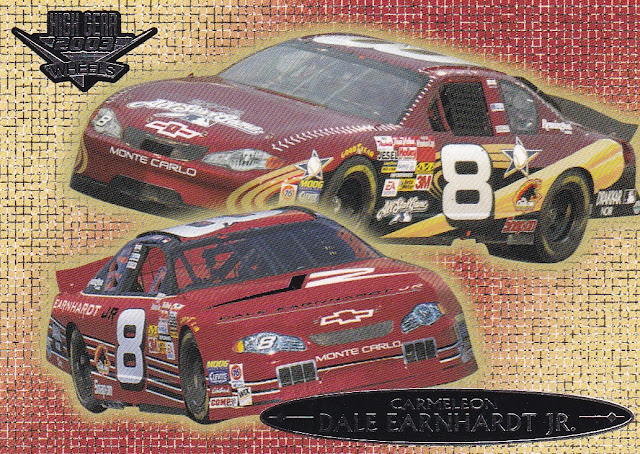 The back of this Dale Earnhard Jr. 2003 High Gear Wheels Carmeleon says "SAMPLE" on the back of it.  Maybe a prototype? I like it. 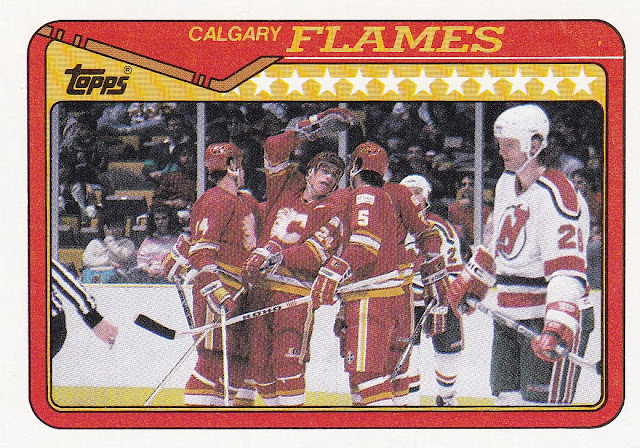 We'll finish it off with some cool Calgary Flames cards.  Can't thank Tim enough and the cards really are fun.  This is only a small representation of what he sent.  The variety made it so much fun as did many of the really unique cards.  Great job Tim and your cards will be in the mail soon! 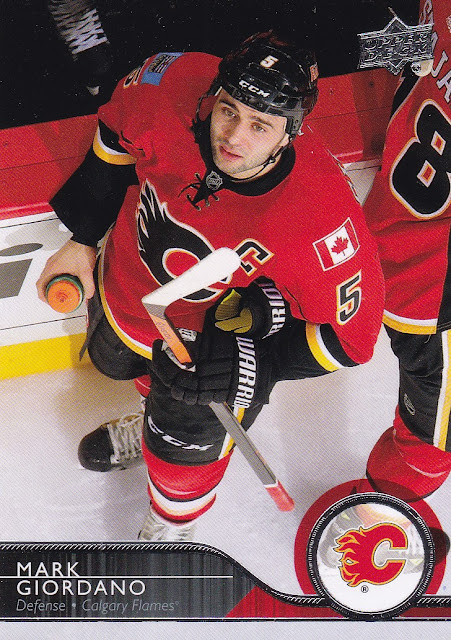 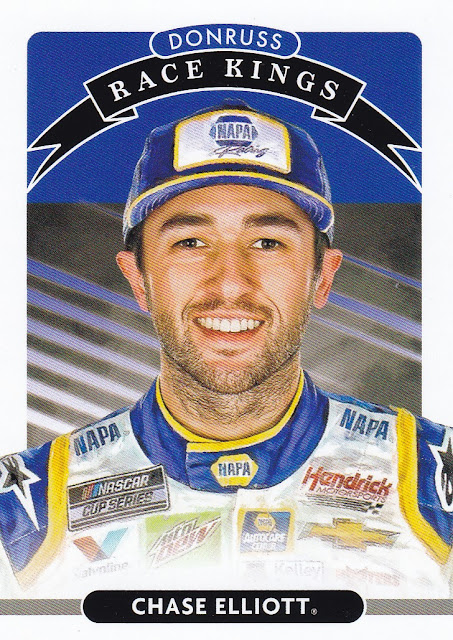 2020 Donruss Racing: Happy Father's Day.  I'll be watching the race with my pop today.  We'll start this pack with the reigning NASCAR Cup Champion on an appropriate Race Kings card.  I do like the design of these though I like the Race Kings from previous years that have more of that art feel to them.  Elliott is currently third in the standings and has one win.

There's a decent checklist but not all the cards have the driver's car number and I can't figure out why.  Not a big deal but I do like the numbers on these.  I do like the Retro 1988 cards.  That was a design I have always liked. 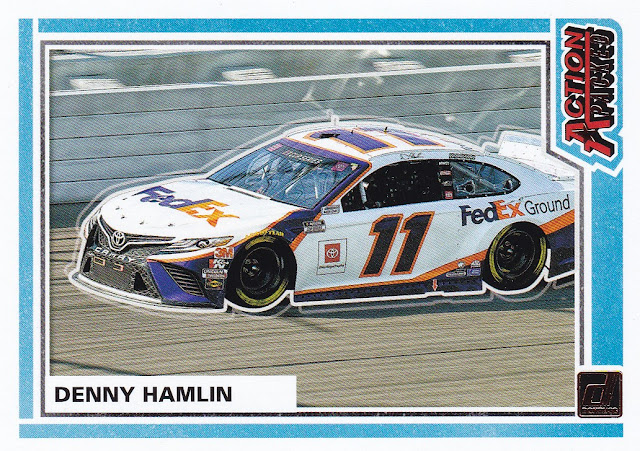 These Action Packed cards give us a look at the cars in action I guess.  That light blue reminds me of the 1982 Donruss cards which some had a similar color.  Hamlin currently sits atop the standings but still doesn't have a win on the season.

I'm a big Contenders guy so I like seeing their inclusion into the set.  The Dominators are nice  and we get to see these guys in winning moments.  Richard Petty just doesn't look right without the mustache...or cowboy hat.  William Byron is having a great year already securing a win and sits in fourth place.

That's a Carolina Blue Parallel on the left.  I'm pretty sure they go with Carolina blue since the sport is based out of North Carolina.  Not that many Rated Rookies in these.  I thought there'd be more.  The Truex Jr. Race Kings insert is a silver parallel.  Looks gray to me.  NASCAR and Panini didn't shy away from masks in this release which I like.  These guys and the crews wore them at every race so it is how we remember the year.  Truex Jr. already has three wins this season and is in sixth place. 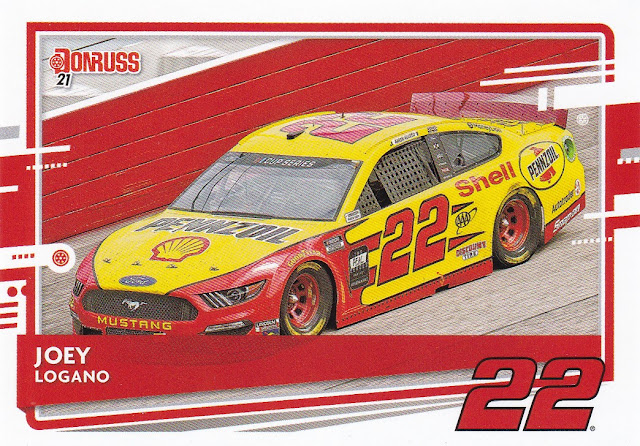 I like car cards as we do see them for the majority of time on race days and are pretty synonymous with the driver.  Logano is in 5th place with a win this season.

They're optics in these packs.  This Race Day relic has to be a tire on this Ricky Stenhouse Jr. card.  Always fun pulling relics when you aren't expecting them. 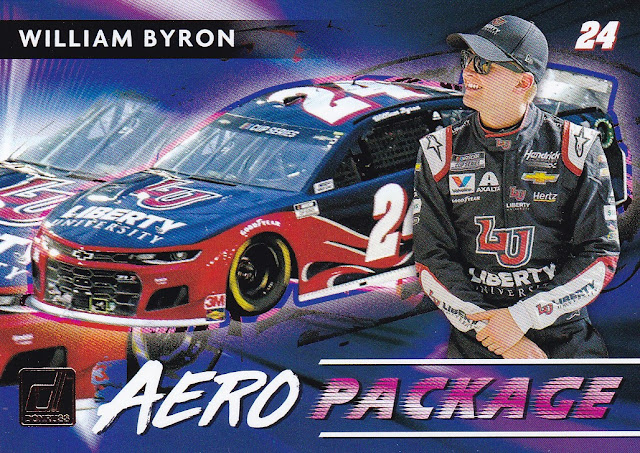 I like the colors and having both the driver and car on these Aero Package cards. Brennan Poole below is shown thanks to his mustache and hair.  Looks like he should be in Formula 1 not NASCAR.  This was a fun pack of cards. 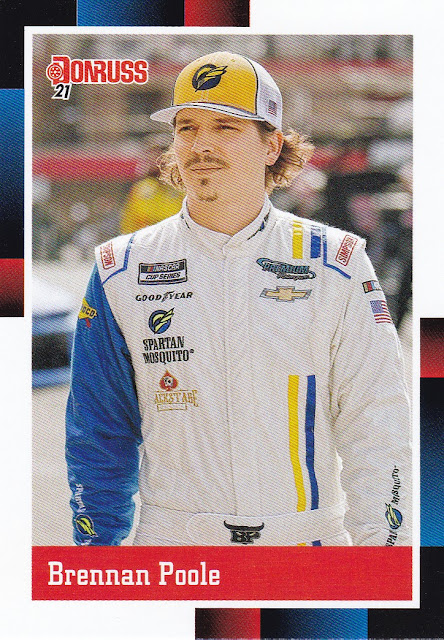 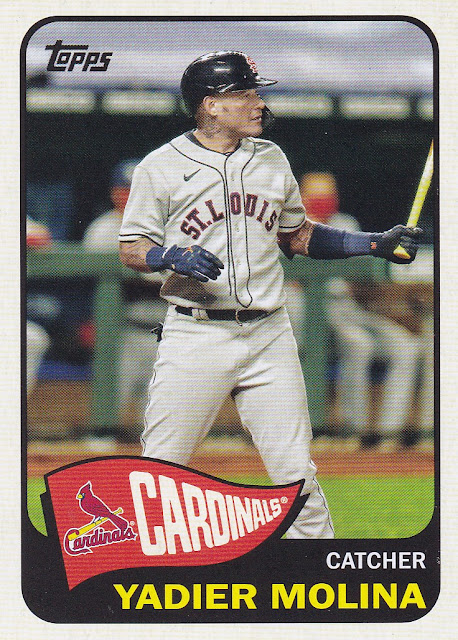 2021 Topps Baseball Series 2: Found these in the wild so I grabbed a hanger box.  I like these 1965 Retro Redux inserts.  The large pennant and logo work great here especially with PC guy Yadi.

Not a bad design as I said in looks at the Series 1 cards. The photos are really good and stand out. 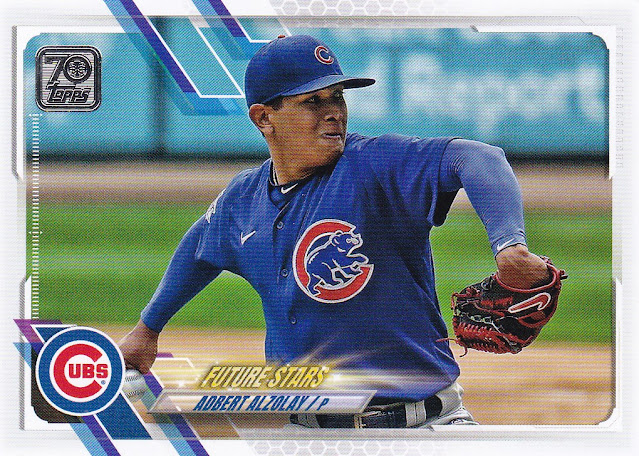 Young players are showcased with the Future Stars and RC cards per the normal Topps M.O.

Parallels in my pull included a Red Foil #/199, Gold Parallel #/2021 and a Royal Blue Parallel.  The Royal Blue are my favorites. 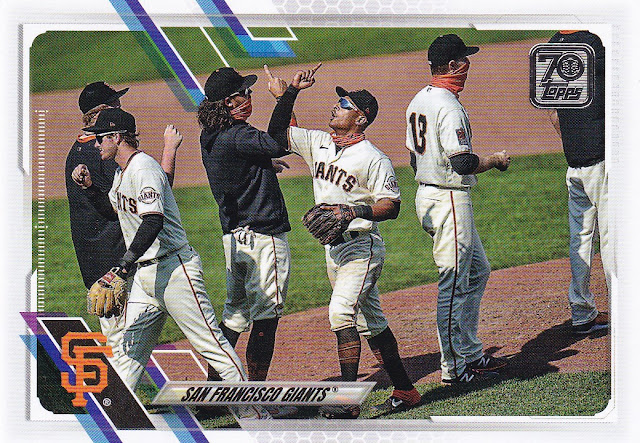 Team card.  Enough said but I do like their inclusions and the stats on the backs. 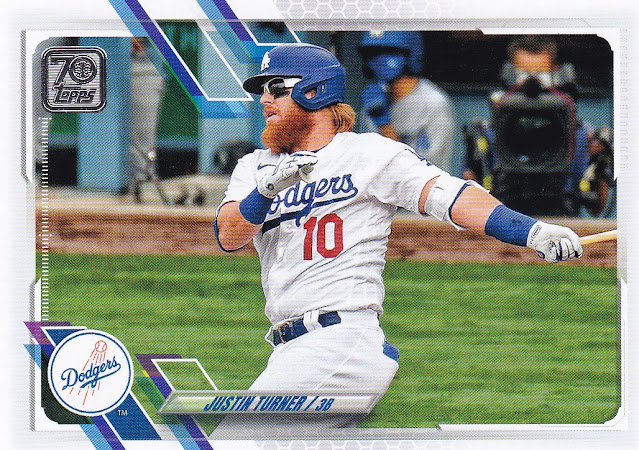 Series 2 isn't my favorite release of the year but it's still fun when I get to open new cards.  We'll finish it off with this Significant Statistics Acuna Jr. 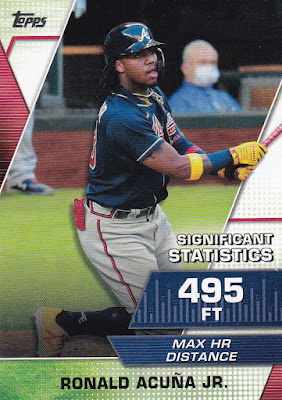