Atlanta Hawks Down 0-3 to Cavaliers in Conference Finals 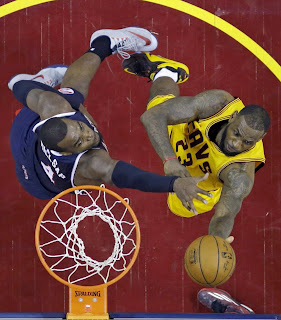 The Atlanta Hawks are now down three games to none after a tough loss to the Cleveland Cavaliers last night.  The game was exciting but none the less a loss.  Considering the starting lineup that Cleveland is having to play with this really is disappointing.  Both teams are dealing with injuries but Atlanta is just not playing well.  That is the bottom line.  While Kyle Korver is a big loss he was not the shooter we saw in the regular season only hitting 36% from the arc in the playoffs, 39% overall.  DeMarre Carroll has struggled the last two games while he is tasked with guarding, and being guarded by, LeBron James.  Millsap is not the same and while Teague has had some good games I wouldn't count last night as one of them.  Yes he had 30 points but it was on 9-23 shooting (to his credit he had zero turnovers).  The Hawks are not playing at the same level that took them to 60 wins during the regular season.  And as banged up as the Cavs are they can't overcome LeBron without playing well as a team.  That is something that has escaped them so far in the playoffs.  History says they will not come back from this deficit.  They played hard in game three which is a good thing.  I was worried they'd come out flat in Cleveland.  I hope they get one win and can take this back to Atlanta.  It has been a great season and I'd hate for it to end with a sweep.

Quick note on the Houston - Golden State series.  This is one where Houston has to be kicking themselves.  They had two close games at Golden State and they had to believe they could turn things around at home.  The game they had in game three sealed their fate.  It is a shame.  I really thought this could go six games.  I still think Golden State wins it all.  They are relatively healthy for this time of the year and continue to click on all cylinders.
Posted by Bulldog at 12:47 PM No comments:

Atlanta Hawks to the Conference Finals for the First Time in FOREVER! I can't say I'm surprised Atlanta made it the conference finals.  No slight on Washington who I was high on during the regular season but I thought Atlanta was the better team.  Maybe not playing as well as the Wizards before the series but Atlanta the better in my book.  It was a good series and I have to admit I was worried when Paul Pierce hit that game tying shot at the end of game 6.  I was very concerned about the prospects of an overtime period with Washington having the momentum.

Still the Hawks haven't been playing at the top of their game which they showcased for the first 62 games of the year.  Kyle Korver and Jeff Teague are both hitting under 40% and Dennis Shroder is shooting right at 40% in the playoffs so far.  That has to change if they are to beat the Cleveland Cavaliers.  DeMarre Carroll and Al Horford are the only players bringing their A game right now and as with the rest of the team you can't count on either of those player to carry the team.  They have to play well as a team.  Spread the ball around while making that extra pass to get the open shot.

Cleveland can be beat.  I think Teague and Shroder will need to drive on Kyrie Irving making the defense collapse while also making him work on defense.  When they are aggressive good things happen.  You aren't going to stop LeBron James so I say don't throw everyone at him trying.  I think DeMarre Carroll can do a decent job on him as he is a good defensive player.   Still LeBron will get his.  That is ok.  I think if they can slow Irving some and make LeBron have to carry the team the Hawks a shot.  Irving is a great player so that is asking a lot.  Still I think it would put pressure on James and gives the Hawks a chance at winning.  The Hawks also have to make shots.  They aren't shooting well right now with the exception of Carroll (43% on threes/52% overall).  Horford is hitting big shots and shooting well (49%) but while he gives you the total package to include being this team's leader he can't carry the team.

Hit shots, make Cleveland work on defense and maybe Atlanta catches some breaks and wins this thing.  I'm not sure they are up to it but I'm definitely excited to see them  in their first conference finals appearance since 1970.  This is big for the Hawks and their fans.  I'm stoked.  Go Hawks!
Posted by Bulldog at 6:59 PM No comments: 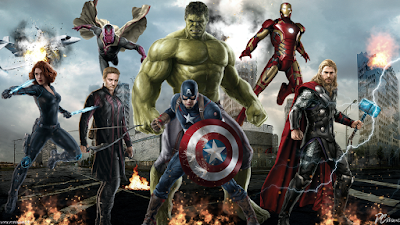 We were able to see Avengers Age of Ultron the Friday it was released while celebrating a youngins birthday.  It didn't disappoint.  There may be some spoilers here so I'll throw out the SPOILER ALERT warning.  We always worry about the sequels but this one delivered.  I really enjoyed some of the character development especially the relationship between the Black Widow and the Hulk.  This added a new depth to the team while as always complicating matters.  We also see a side of Hawkeye we've never seen before.  The relationships between the rest of the main characters stays pretty much status quo while there is a big rift causing angst among the characters.

Scarlett Witch (loved her costume/look) and Quick Silver are added to the fray very quickly.  They add another dimension to everything going on and I really liked their characters.  They are introduced at the beginning of the film which involves a ton of action which is a great way to start things off.  And there is plenty of action.  The movie sails along and is ending before you know it.  There are the fan favorite fights involving the Hulk and Iron Man in his Hulk Buster armor which was a fun sequence.

Ultron, played by James Spader, was a very good character.  His moment of reveal to the Avengers was one of the best parts of the movie and kind of creepy.  I he was a good foil to the Avengers.  Also brought in as a baddy was Vision.  A character I've always liked it was a thrill to see him get a pretty major role though you don't see him for about 2/3 of the movie.  The Falcon and War Machine are also players in the movie but with pretty minor roles.

This movie should do great at the box office.  It has everything you could want from an Avengers movie.  Tons of action, character development, twists, and conflict.  I can't wait to see what the remaining Marvel movies look like as this is all moving things towards the Civil War storyline.  I'm excited and hope everyone gets a chance to see Avengers Age of Ultron. 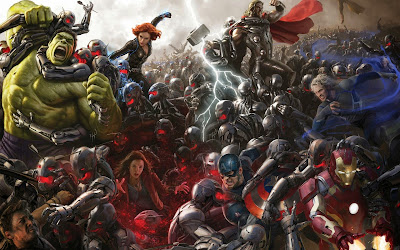