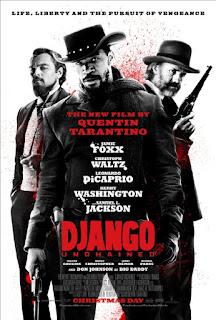 I'm a little late on this one as Django Unchained was released in 2012.  I enjoy westerns but when this came out I just wasn't sold.  With Quentin Tarantino at the helm I was afraid this movie would be just too out there.  Maybe that wasn't fair but that was my thinking and seeing the trailers didn't sell me.  I couldn't have been more wrong.  This was a great movie that was very entertaining.  It was a very good western while staying true to a Tarantino experience.  Jamie Foxx, Christopher Waltz, and Leonardo DiCapprio star in the movie which sees Waltz's character Dr. King Shultz, a bounty hunter, free slave Jamie Foxx (Django) to help him track down fugitives on the run.  A partnership ensues that sees them ultimately try to free Django's wife who is still a slave.  She belongs to DiCapprio's character, slave owner Calvin Candie.

There is tons of action from beginning to end with folks dieing left and right.  I really enjoyed it as well as those moments you'd come expect from a Tarantino movie.  The only thing I'll warn folks of is the language.   The most disparaging word an African-Americans can be called is used over 110 times.  It can definitely be a little off putting but I must assume it was common in the era in relation to slaves.  I'm not a history major so there is no telling.  Still it is there.  I had to get used to it but it didn't distract too much from the movie.

Christopher Waltz was the star of this film.  His portrayal was fun to watch and he and Foxx definitely worked well together.  DiCapprio was also very good.  I really had a good time watching this movie which was a nice surprise for me.  If you can handle the language you definitely need to watch this movie. 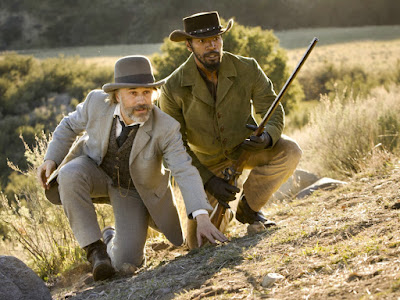 Posted by Bulldog at 8:44 PM No comments: 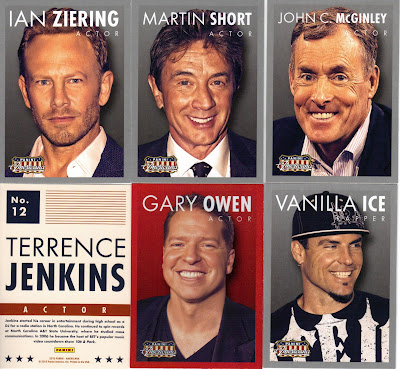 I picked up a pack of the 2015 Panini Americana trading cards a while back and couldn't be more disappointed.  I think this is the first time I've purchased this branding and I'm not sure what I expected but this wasn't it.  This is the most bland set I've seen in some time.  A straight silver border with a head shot of a celebrity with a silver background.  Not much to get excited about.  The individual's name and occupation are at the top of the card, again in silver, with the Panini logo in the bottom left corner.  The back gives a brief write-up which is ok but the lack of imagination and color make this a dud as well.  It just seems like someone was looking for the cheapest way to put out a card and this is what they came out with.  I did receive a red parallel card which actually shows some pop but that was about the only life I saw in this pack.

I do like the concept.  Cards of entertainment personalities and I enjoyed some of the cards I pulled specifically Vanilla Ice, Ian Ziering, and John C. McGinley.  Martin Short is also a nice pull though I'm not a huge fun.  A head shot with the bland design is just so uninspiring.  Looking at the inserts, and the designs for those cards, there are some great looks and insert sets to be had.  But if I'm just buying a normal pack and won't have much chance of getting one of those nice looking cards why would I want to if this is all I get to look at.  Sorry, Panini but this is a fail.
Posted by Bulldog at 9:30 PM No comments: