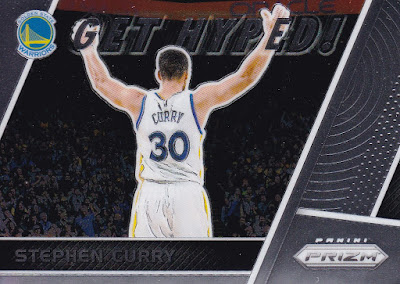 With the draft tonight this is a good opportunity to look at some basketall.  This 2017-2018 Prizm Basketball pack had 12 cards.  Prizm is definitely a brand I don't care for.  With a card stock that bows and a higher price point it isn't for me. This year's set is a decent looking though.  My pull was highlighted by a Steph Curry Get Hyped! card which was pretty cool.  I like that photo.

The base fronts aren't bad with the players standing out on a muted background.  The Fundamentals card I pulled was a nice looking card.  Too bad Isaiah Thomas, who suffered from injuries and poor play was my pull.

The backs are simple but are a good design with the nice color photo the highlight.  I pulled a few Red, White and Blue parallels which also look nice. Won't grab more of these but I am glad I picked up a pack this year.
Posted by Bulldog at 6:28 PM No comments: 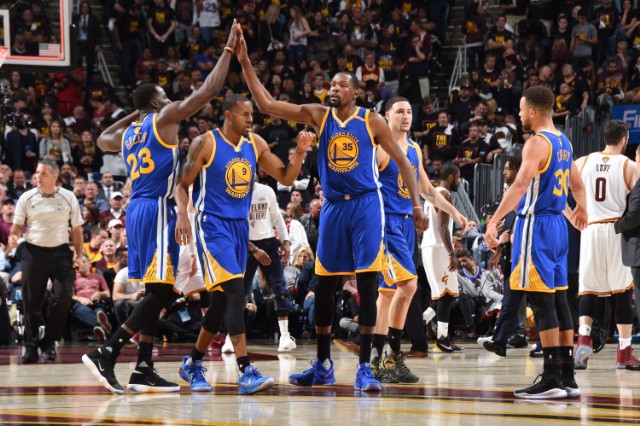 The Golden State Warriors defeated the Cleveland Cavalier 4-0 in the 2018 NBA Finals.  We knew going into the season this was the probable outcome.  This is a great team and they deserved the title.  Watching them play is fun.  They have so many weapons it is hard to ever count them out even when down 10 or 15 points.  Now that they've won three championships in four years there is sure to be some Warriors fatigue.  But don't hate.  This team has great players who play great basketball not only on offense but also on defense.  Look at the Cavs' stats from the Finals and you'll see a team that was completely shut down sans arguably the second greatest player ever. 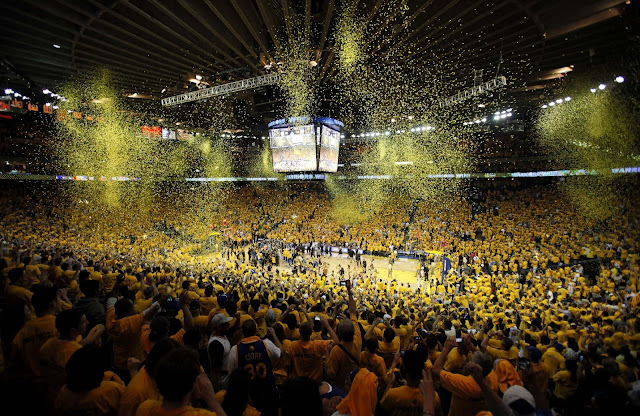 If it weren't for LeBron we'd be talking about Kevin Durant in a different light.  He is a great scorer and so good he even shines on a team of stars.  Stephen Curry is an amazing talent and shooter, the likes of which we really must give his due because we will talk about his shots and shooting for ages to come.  Klay Thompson is another great shooter who has a good all around game that is perfect for this team.  The villain of course is Draymond Green.  Dislike him if you will - I do quite often but he is another perfect fit for this team whose stats will never tell the true value of his play.  In theory coaching a team like this is easy but if you pay attention at all to history and what players and coaches will tell you it can't be further from the truth.  Steve Kerr must also get his due for the team's success. 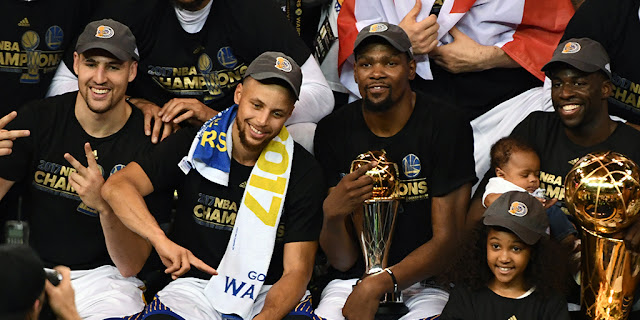 We obviously didn't get a competitive series but we saw great play by a superior team.  We knew the Cavs weren't good enough and they got rolled.  Sure J.R. Smith doomed them from the outset but the good teams find ways to win and when Golden State got a second chance in that overtime the Warriors took no prisoners and ran away with the win.  I'm not sure three of four championships make this team a dynasty but I know by just watching them they are studs and I won't argue if people want to call it that.  Congratulations to the Warriors, a great team with great players.
Posted by Bulldog at 8:02 PM 5 comments: 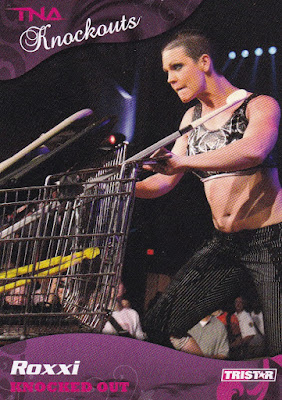 The last pack I grabbed in Ohio were 2009 TriStar TNA Knockouts cards (not TnA - TNA Total Nonstop Action).  I don't know how big a hit this was in 2009 but it was a pretty dynamic set with plenty of possible pulls so I thought what the heck.  I didn't get any inserts or parallels but I do like the base set design.  The base cards are divided into different subsets.  I pulled two Knocked Out, one Male Call and one Once Upon a Time card.  The Knocked Out subset are my favorite of the three.  I don't know any of the wrestlers but I am still happy with the pack.  It was definitely different and I like the looks of these cards.

This is another of the packs I grabbed in Ohio. The 2017 Upper Deck Marvel Annual cards have a design I like.  They are bright and the art is nice.  The backs are familiar with "stats" and a short write-up.  My pull was pretty weak overall.  Hawkeye is a known quantity but among the base cards I doubt many are very familiar with Madame Hydra, Moonstone, or Forge. 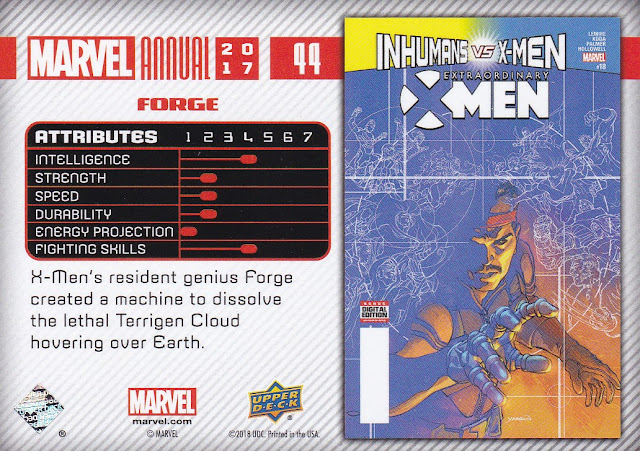 My two inserts were a Top 10 Heroes card of Hawkeye and a Top 10 Story Arcs Inhumans vs X-men.  Not a fan of the Heroes card but the cover for the Story Arcs insert is something I like.  Overall I'd look for more of these though I'd lean towards singles as opposed to packs.
Posted by Bulldog at 8:26 PM No comments: 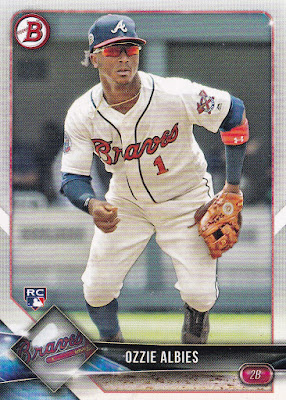 This was an impulse purchase.  This lone 2018 Bowman blaster was sitting there at my local Wal-Mart and I couldn't resist.  The big score here for me was an Ozzie Albies base card.  I had really hoped I would have seen one prior to now with already having opened a blaster and two value packs.  Otherwise nothing really stuck out to me but I'll show off more of my pull.

Posted by Bulldog at 5:33 AM No comments: 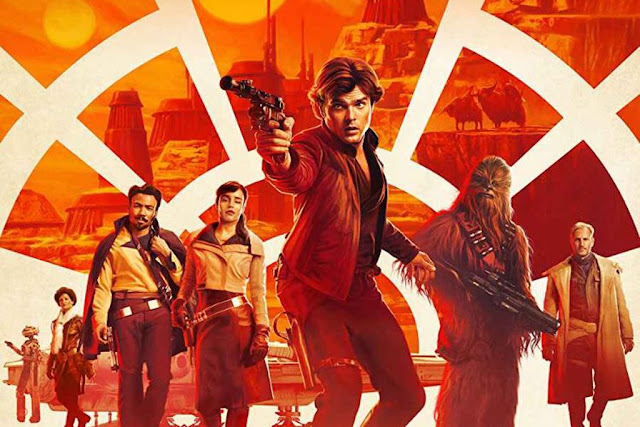 I enjoyed Solo: A Star Wars Story.  Those I know who have seen it have said the same thing.  I was not overly excited for this movie.  Seems like there were other movies that Star Wars fans would have been more excited for.  Maybe Boba Fett, some of the many Jedi that were introduced in Episodes I-III, and Rogue Squadron just to mention a few off the top of my head.  Doesn't mean this isn't a good movie but I just didn't sense the excitement you see ahead of most Star Wars movies.  Were we really clamoring for a Han Solo back story on how he became roguish?  It could also be Star Wars fatigue or the fact we've had quite a few blockbusters already this year and more big movies coming up soon. 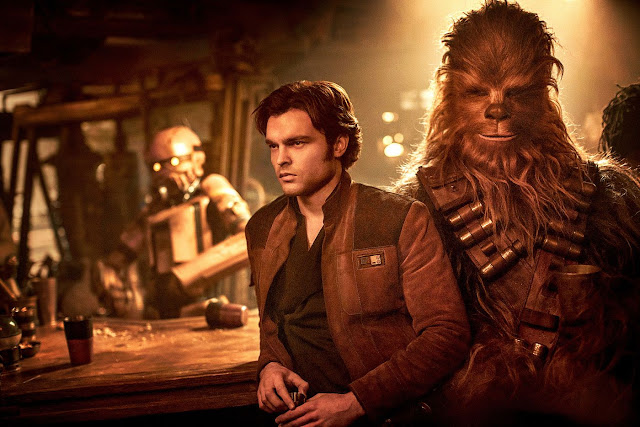 The movie itself has plenty of good characters that all revolve around outlaws doing capers to make money set in the Star Wars universe.  The acting was good with Donald Glover sticking out though I liked Thandie Newton's Val as well.  The movie definitely filled the blocks for an action-adventure flick.  While there are slower moments I really never thought it was slow.  The action is paced well throughout the movie.  As an admitted Star Wars nerd it was fun to watch.  Did it pack the punch of the mainline films?  No.  Rogue One was definitely more fun to watch.  Of course that storyline is heavily tied to the Star Wars main universe.  While Chewy, Han, and Lando play huge parts in the Star Wars proper this movie is somewhat removed from that.  Still it is fun to see the early beginnings of that Han and Lando relationship, how Han and Chewie become lifelong partners and of course how Han comes about owning the Millennium Falcon.  Solo is definitely worth watching though it looks like most will watch it in the comfort of their own home.  And oh yeah there is a major character who shows up late in the movie but that is all I can say about that.  This characters is also one I think Star Wars fans would like to see more of.
Posted by Bulldog at 1:08 PM 4 comments: