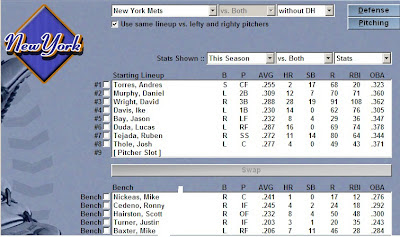 Baseball Mogul is a game I've been playing for about four years now and I love it.  This game is a simulation so no joystick skills are needed.  What it does allow you to do is build a team year to year as a general manager and set lineups as the manager.  There are of course some fiscal restraints you have to work with but that is part of the fun...and agony.  For newbies to Baseball Mogul I suggest you play as one of the major market teams so you can get the hang of it without giving up.  Once you have some skills move on to the Kansas City Royals of the world.  The difficulty can also be made more difficult or easier as needed.

The game uses real players back to 1900.  As a baseball history buff this is awesome though I will admit playing through the early 1900's can be daunting even for myself.  So you can start a season with the current season or from 1900 on.  Once the season loads you can then do a fantasy draft.  This is one of the coolest features.  Start a season in your favorite decade and you'll have a wealth of history to choose from.  The rosters can also be left alone letting you play with the exact lineups of the day.  You then set your starting lineups, bench and minor leagues.  Before you quit before you get started you don't have a full minor league system.  So don't worry about having to manage 75-100 minor leaguers.  The game interface makes it simple to see where your players are and their ratings as well as what rating they are projected to top out at. 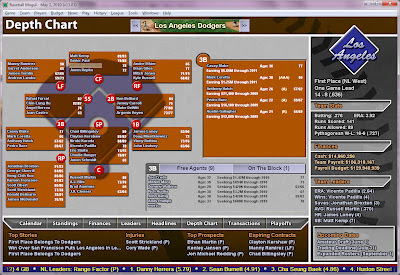 Your budget will be based on the size of your market and what you make from tickets and concessions. The dollar amounts for each of these are set by you.  The budget for the farm system, scouting and medical staff are also set by you.  I usually set these at the beginning of each year but they can be adjusted at anytime.  Just like any team you will deal with player salaries via salary arbitration and free agency to include negotiating the salaries.  Baseball Mogul 2013 has made free agency harder as, for the first time, other teams jump into the bidding for players.  Also under the budget umbrella is the ability to build stadiums.  To do so you'll obviously have to have enough cash (via profits made) to build a stadiums.  Like real life new stadiums can mean additional revenues.  Again all this is pretty easy to handle but it will take some work to get down the nuances to stay in the black. 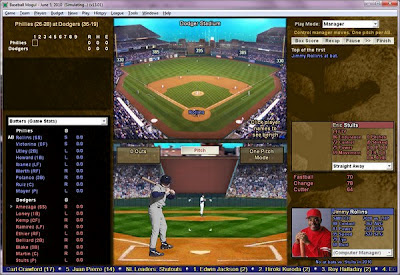 During the season you'll have the option to play games or not.  The software will simulate all games for you if you like allowing you to pay attention to personnel issues.  If you want to play the games you'll be thrown into late inning situations of a game or you can go to the calendar and play a game from the first pitch.  You can also do this at various levels of control so again you don't have to get too deep.  You must be mindful of injuries so I like to simulate one to two months at at time.  You can set how many position players and how many pitchers you want to carry on your roster at any given time.    Once the playoffs come you may want to take a more proactive approach as each game is so important.  Also, if you are an American League team, don't forget to set your "WITHOUT DH" lineups prior to World Series games in National League parks.  Not setting a particular lineup can leave you with some randomness in the field - Dave Kingman at shortstop was no bueno?

The amateur draft occurs around the first of June.  It is fun to draft players you know and love.  Just like life players will take time to be ready for the majors.  It is also somewhat random on how players will play time to time.  In other words you might play two different times both playing through the 80's.  It isn't a given that Rickey Henderson will be great both times.  Nine times out of ten he probably is but again there is some randomness but that is part of what makes it fun.  At times a player's ratings will fluctuate due to injury or other unseen reasons.  You draft Fred McGriff.  He starts out with a rating of 62 and his peak rating is 92, the peak rating what he is believed to top out at.  He goes through your minor leagues for four years and then your bench for a year. During this time his current rating will probably keep going up but his peak rating may fluctuate.

You can make trades until the 31 July trading deadline.  This can be done by finding players you want through the player search feature.  You may see a player in the leaders screen that you want and you can try to work a trade for him via the "GO GET" button on his profile.  You may also put players on the trading block and get offers from other teams.  Always interesting to see what teams will offer. 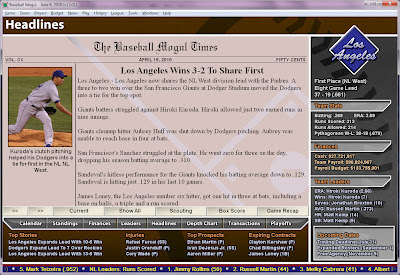 The game advances and changes just as the majors did throughout the years.  You'll have expansion teams (and drafts), the advent of the DH, and additional teams added to the league.  Many of these options can be controlled or changed through the various league options.  I bet I've played 20 plus different  franchises and I've enjoyed them all.  My crown achievement was taking the Kansas City Royals from the early 70's through 2015 or so.  With their budget nothing is a given but I still had a handful of World Series rings when it was all done.  I could go on and on.  I am a stat nut so so I love watching what players and teams can do.  I love being the general manager playing with the rosters and money.  I can play one season in 30 minutes or less which allows me to play pretty much whenever I want to.  The game can be saved at any point so you don't have to rush.

You can go to the  Sports Mogul website and download a demo of the 2012 game.  It won't have all the features available but it will give a good idea of how the game plays.  I purchaed the 2013 Baseball Mogul for $34.99 as a download and received Football Mogul 2012 free.  I haven't played it yet but watch for that review once I get into it.  I highly recommend Baseball Mogul to any baseball fan who isn't looking for a joystick centric game.  I think the history, easy learning curve and the ability to play a different game everytime can appeal to all.  Give it a shot today.
Posted by Bulldog at 8:56 PM