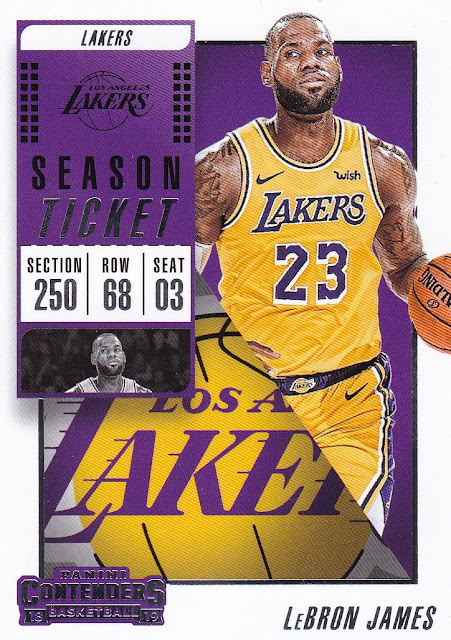 I picked this pack of 2018-2019 Contenders basketball the same time as the Hoops pack I just showed off.  Like that one, this one started off at the top of the NBA food chain with LeBron James.  Nice seeing him in his Lakers uni on this card.

It took me some research on Basketball-Reference.com but I figured out what the numbers are for this year:  Section=Weight   Row=Height   Seat=Year Drafted   The first ones were pretty easy but that last one had me stumped for a bit.

Maybe not quite the star power of the first two packs I opened but still plenty here to keep me happy.  All three of these guys are currently starring for teams getting ready for their playoff run.

Enes Kanter was picked up by the Blazers after being released by New York. He was a great pickup and gives them some quality minutes off the bench.

Dwight Howard has played only nine games this year due to injury. Picked up in the offseason by the Wizards it is a shame as he still puts up good numbers for a 33 year-old big man.