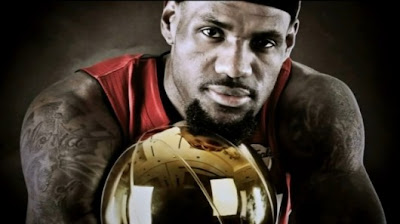 The Miami Heat won their second NBA title four games to one over the Oklahoma City Thunder.  After losing game one they returned to attacking the rim and their outside shooters hit shots and the Oklahoma City Thunder couldn't answer.  While I thought Miami would win I expected a longer series.  Still, with the exception of game 4, all the games were close.  LeBron James had an outstanding series averaging 28 points, 10 rebounds, and 7 assists.  As a team the Heat hit 42 of 98 three point shots.  Dwyane Wade and Chris Bosh did their part very well but my other hero for Miami is Shane Battier who was the role player who stepped up with a great series.  He only averaged 11 points per game but hit 15 of 26 from beyond the arc.  He was the beneficiary of many passes when the defense collapsed on driving Heat players.  This was something the Thunder had no answer for.

Oklahoma City played well and most had them winning the series after taking game 1.  Their biggest issue was the disappearance of James Harden.  He averaged 12 points in the Finals but they weren't timely and his diminished contribution couldn't be made up.  Much was also said about Russell Westbrook taking too many shots at times but I think the Thunder's win-loss record during the regular season when he shot more than Durant was excellent.  I think they were 26 and 3.   He may not be a true point guard but he still played well and almost willed his team to victory in game 4 with 43 points, 7 rebounds and 5 assists.  Kevin Durant hit an outstanding 54% of his field goals while leading the Thunder with 30 points per game.  Still they weren't the better team but this Final's experience could help them in the future.  They have a great core and I think most folks wouldn't be surprised if they made a return trip or two to the Finals.

No matter what you want to concentrate on this was LeBron's series.  LeBron haters will still hate him but no matter.  He is a great player whom we'll speak of among the all-time greats when he retires.  He now has a championship to add to his resume.  Whether or not it is his last does not matter.  He is a great player and I'm glad he has a championship.  After handling what I feel was undue criticism for "the decision" and, as he admitted himself, handled the Finals loss last year to Dallas poorly, he made all the right changes this year.  He had another great year as he led what is now his team through each challenge and when it mattered most he didn't disappoint.  Good on him and the Heat.
Posted by Bulldog at 5:55 PM