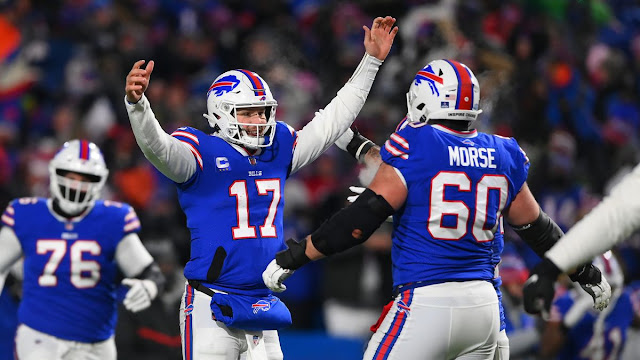 The Bills destroyed the Patriots last night 47-17.   I was really worried about New England.  As much as any other team.  Playing them and Bilicek a third time seemed like trouble but the Buffalo offense shook off the inconsistency seen at the end of the season and dominated the Patriots.  I loved that Devin Singletary was the focus of the run game and he responded.  Allen did have a masterful game as well throwing for 300 yards while only throwing four incompletions.  He also added 66 yards on the ground.  And the Bills' defense was as good as advertised.  The Bills will need all of this going for them in the Divisional round.  They'll play in KC which isn't a surprise.  I figure they would have to play them sooner or later.  Hopefully they are firing on all cylinders.
Posted by Bulldog at 6:12 PM